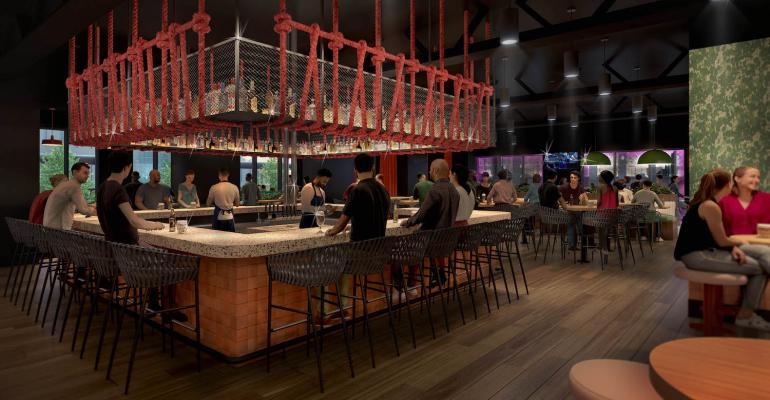 Kindling is slated to open in Willis Tower in Chicago in January.
Trends>New Restaurant Concepts

The chef will drive the menu at Kindling, slated to open in January 2023

Jonathon Sawyer, who gained a reputation as one of the country’s leading chefs in the Cleveland area with restaurants including Greenhouse Tavern, Sawyer’s and Trentina, is teaming up with the Fifty/50 Restaurant Group in Chicago to open a spacious restaurant in the city’s Willis Tower.

Kindling: Downtown Cookout and Cocktails, a 17,000 square-foot venue on two floors of the building, will have a capacity to seat 300 people inside when it opens in January, with an additional 200 seats on a terrace overlooking Adams Street that will open as the weather warms up.

“We’re going to kindle conversation and fun around the table, but we’re also going to utilize a 13-and-a-half-foot hearth and we’re going to kindle those fires to create the flavors that we serve to everybody. The idea is wood fire for the masses,” said Sawyer, who is also a partner in the new restaurant.

Sawyer is no stranger to wood-fired concepts: Three of his past five restaurants — Trentina and Sawyer’s in the Cleveland area and SeeSaw in Columbus, Ohio — were also based on wood fire. He said the menu at Kindling will be drawn from his culinary background of French, Italian, and American food with other global influences mixed in, such as his Thai accented crispy Brussels sprouts with chile and fish sauce, and Eastern Mediterranean labneh that will accompany his rotisserie chicken, which is brined and dried over 48-hours before being cooked.

Sawyer is also anticipating offering pastrami-rubbed short ribs slowly cooked over the wood fire for eight hours and served with whole-grain mustard and a smoked onion.

The restaurant will feature house-made pastas as well.

Sawyer said he’s anticipating average per-person checks of $18-$29 at lunch and dinner entrées, excluding steaks, would be no higher than the mid-40s.

Sawyer said he met Scott Weiner, who in 2008 founded Fifty/50 with Greg Mohr, in June as the chef was looking for new career opportunities and a support system that would allow him to do what he does best, “which is inspire the cooks, create the recipes and work the dining room.” He signed on with the Kindling project around three months later.

Kindling will be part of Catalog, a five-story retail, dining and entertainment space within Willis Tower.

“When we began the development of Kindling in early 2020, we knew we needed someone at the helm with world-class talent and an incredible passion for their art. We’ve found exactly that with chef Sawyer, and we feel like we have assembled a dream team to help us operate this special location.” Mohr said in a release announcing Sawyer’s role.

That release also said Eric Schuster would be the restaurant’s general manager and Julieta Campos, 50/Fifty’s beverage director, would lead the bar program.