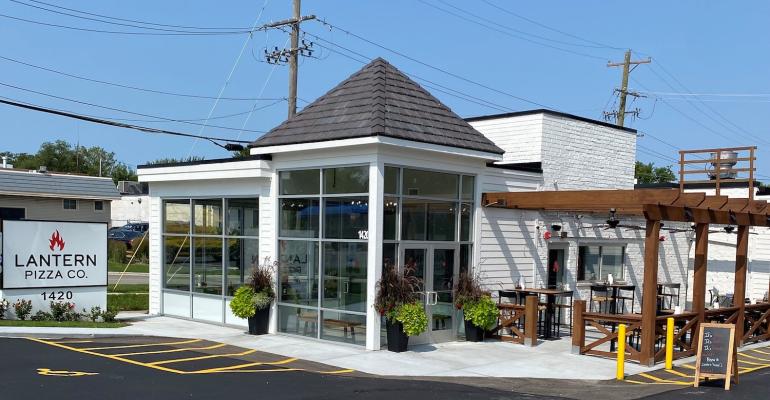 Dan Coudreaut is best known in the restaurant industry as the former corporate chef of McDonald’s, but he has had a long and varied culinary career that has led him to owning and operating a pizzeria.

Lantern Pizza Co. opened this past summer in the Chicago suburb of Downers Grove, Ill., serving Coudreaut’s own style of pizza, which is a sort of New York-Neapolitan hybrid with his own Midwestern touches that includes mozzarella cheese made in-house from Wisconsin cheese curds and an emphasis on hospitality.

“Pizza’s been kind of a magical thing my all my life,” Coudreaut said. “I grew up as a New Yorker seeing those big square boxes with round food coming in the house. I never actually saw how it was made and I was like, ‘Wow this is this is pretty amazing stuff.’”

Coudreaut graduated from The Culinary Institute of America in Hyde Park, N.Y., where he learned the culinary techniques of French fine dining, but not pizza.

He worked for Four Seasons Hotels and Resorts in the late 1990s, where he was a fine-dining chef, but pizza was on the room-service menu.

“So my team was doing pizzas, and I realized I never learned how to,” he said.

Coudreaut’s career path took him to the Metromedia Restaurant Group where he worked for the Bonanza and Ponderosa chains before moving to McDonald’s where he worked in culinary innovation for 13 years.

He left that company in 2017, started a consulting business, and the following year went to Naples, Italy, where he studied for 30 days with 4th generation pizzaiolo Enzo Coccia.

In 2019 he started to get serious about opening his own restaurant, which, along with pretty much everything else, was delayed by COVID, but the pandemic did solidify for Coudreaut the potential of a pizzeria.

“The one category in the restaurant industry that did really well during COVID was pizza. So we were definitely confident in our menu category, and even more confident with our strong point of view that simple was better,” he said. “Decision fatigue is real and prevalent in our society, so we really wanted to make it easy for the guest. We also wanted to make it easy for us to produce memorable food.”

He also was convinced that he wanted to own his own property rather than be beholden to a landlord, so with the help of the Small Business Administration he and his wife Kim Coudreaut bought their own property that became Lantern Pizza Co.

The name, by the way, comes from the fact that his pizza instructors in Naples referred to a wood-burning pizza oven as a lanterna, or lantern.

His experience in Italy influenced his point of view with regard to the kind of pizza he wanted to make, but it didn’t entirely dictate it.

“Our pizza is definitely inspired by Naples, but it’s not Neapolitan in the truest sense of the word,” he said. “Neapolitan pizza is flour, salt, yeast, and water. Period. I add a little olive oil to the dough. That’s something the French or the Romans might do and it does a beautiful thing for the dough.”

Like Neapolitan pizza it’s an individual pie of around 12 inches and it cooks in a very hot oven in around a minute and 45-50 seconds — slightly longer than a Neapolitan pizza. And he uses a gas oven.

“It's just much more efficient than wood, and I think much more sustainable for training, expansion if we ever want to do that, and better conversations with municipalities that don't necessarily want to have wood-burning ovens in restaurants,” Coudreaut said.

And the ingredients are mostly American, including the flour, cheese curds and California tomatoes. He does import gluten-free flour from Italy, “because it’s really wonderful,” Coudreaut said.

The chef said the crust has some char “and is nice and airy.”

“The center does get soft and chewy, and some people really like that and some people don't,” he added. “We’re trying to find the sweet spot of getting some structure that appeals to the American palate, but then also getting that delicate tender chew that you get from a high-hydration dough and a very fast cook. … Pizza is an art and a craft that you're always tweaking. It’s a balancing act between the temperature of the oven, the placement of the pizza in the oven, the mixing process of the dough...”

It's a relatively small restaurant with 25 seats in-house and 25-27 on a pergola-covered patio that Coudreaut calls “the pizza garden.” The average check is $30-$33 and about half of the business is takeout.

That last one is a signature item made by roasting fresh pineapple with brown sugar and butter, dicing it and serving it with crispy applewood smoked bacon, smoked mozzarella and balsamic vinegar.

There’s also one salad: Arugula on focaccia that’s made with the same dough as the pizza, doctored a bit to keep it from puffing too much, and dressed with olive oil, salt, pepper, and oregano.

Of course there’s also the option for customers to build their own pizza, with toppings including both the ones like pepperoni and mushrooms that you’d expect, but also less typical ones including sundried tomatoes, artichoke hearts, and serrano peppers.

There is a very clear reason why the menu is so straightforward.

“We have the luxury of starting fresh from a blank slate,” he added. “It’s so much harder to work with a legacy brand of 50 years, of trying to evolve their menu to something new. We were able to start fresh and come up with what our point of view was.”

They did start adding monthly specials in October. The first was an ancho chicken & garlic rapini pizza with smoked mozzarella finished with house-made hot honey. Currently on the menu is a spinach & sundried tomato pizza with chicken finished with a drizzle of Boursin cheese crème.

“But we're going to be very disciplined to keep the menu from creeping,” Coudreaut said.

“Menu creep” is a common problem in the chain restaurant world, in which new items are added that might seem to provide for a customer demand but move the restaurant away from its brand positioning.

Instead, Coudreaut is making sure that the simple things he’s doing are being done the best way possible. Hence the house-made mozzarella.

“In Naples the guys were calling their mozzarella supplier after their shift at night. The mozzarella was made at 5 o'clock the next morning and was in their restaurant by 10,” he said.

The United States doesn’t have that kind of mozzarella infrastructure.

“Nothing’s easy in the restaurant business, but it's a pretty straightforward method to make mozzarella, especially with these wonderful dairy companies creating the curds for us,”  he said. “Now it’s just folded into our process. People are trained on it and the cooks are proud.”

Those people are mostly students from local high schools.

That helps with retention, as does the sharing of tips with all the hourly employees, not just the front-of-the-house, which can result in a pay bump of $2-$5 per hour.

His background with McDonald’s, which is headquartered in Chicago, obviously has helped him understand how to streamline operations (and avoid menu creep), but Coudreaut said there’s an added benefit, too.

“There’s definitely a built-in customer pool with all of my McDonald's contacts from the corporate office and the supplier community, so I do see a lot of familiar faces and loyal friends coming through,” he said.

Coudreaut said he and his wife are also focused on providing hospitality, and teaching it to their staff.

“We both worked within the Four Seasons system. She was in conference planning and catering, and I was in the kitchen,” he said. “And that's where we really learned the ins and outs of what hospitality truly means —making somebody’s visit memorable, being the first one to smile, stopping to let a guest walk before you. Those were really important things that we learned. And it's so, so rare in today's restaurant industry, especially in fast-casual or quick-service dining, to have a memorable, hospitable greeting and hospitable interactions, so it's very important to us that we instill that in our team.”

“We want to make sure that this visit’s great so that they want to come for a next visit. And the way to do that is to make them feel welcome, make them feel comfortable, be the first one to smile, and give them what they need. It's not rocket science, but it’s really important.”

This article has been updated with details about the monthly specials at Lantern Pizza Co.
TAGS: People Operations
1 comment
Hide comments
Recommended Reading