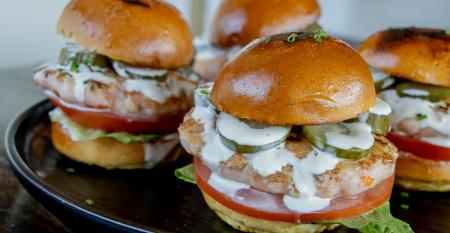 Slapfish founder Andrew Gruel starts over again with another restaurant
Feb 01, 2023
After leaving the fast-casual restaurant he founded, the chef is taking his talents to full-service Calico Fish House

Adijatu Jalloh brings the flavors of home to her catering business
Jan 26, 2023
The grill chef at Cut by Wolfgang Puck has a side hustle recreating the flavors of her childhood in Guinea

Meghan Lee discusses her approach of running a communal kitchen at Heirloom in Lewes, Del.
Dec 22, 2022
The restaurant’s five cooks all work together to run the back of the house

Gavin Kaysen shares his experience as a restaurateur, competitor, and caterer for athletes
Dec 09, 2022
The Minneapolis chef celebrates the ingredients and traditions of his hometown

Jonathon Sawyer to lead the kitchen at new Willis Tower restaurant
Dec 06, 2022
The chef will drive the menu at Kindling, slated to open in January 2023

How a local grain became the star ingredient of the stand-out pita at Gavin Kaysen’s latest restaurant
Dec 01, 2022
Mara in Minneapolis turns out close to 250 pitas every day

D.C.-based chef and restaurateur Ryan Ratino plans to grow his business from two locations to five next year
Nov 30, 2022
A restaurant and cocktail bar are planned for Washington’s wharf, and an oceanfront seafood restaurant is in the works in Fort...

Paul Hargrove, the new chef at The Standard Grill, on what cooking means to him
Nov 16, 2022
The chef also gives Restaurant Hospitality his view on where the industry stands

Chef Ryan Ratino to take his talents to Fort Lauderdale, Fla.
Nov 01, 2022
The concept from the Washington, D.C.-based chef is set to open in the Four Seasons next year

Roy Yamaguchi supports Hawaiian tradition with ‘Kalo to the World’
Oct 27, 2022
The initiative hopes to raise awareness of the crop
Load More