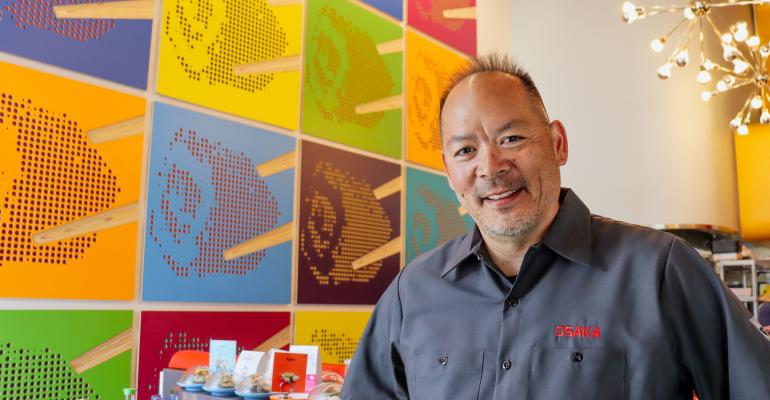 Serving food to seated customers via a conveyor belt isn't a new concept, especially when it comes to sushi. But in Colorado, no one had quite perfected the style until Jeff Osaka opened Sushi-Rama in 2015.

Inspired by similar concepts in his hometown of Los Angeles, and by Japanese culture which started it all, Osaka took the idea to his adopted home of Denver, and is now launching his fifth location of the concept, at which guests pull a plate of food off the conveyor belt and are charged by the plate. The color of the plate indicates the price, which ranges between $2 and $4.

Each plate has two or three pieces of a sushi roll or nigiri on them, and guests can also order off a menu if they want a bento box ($16), chirashi bowl ($18), or small snack such as edamame ($5), miso soup ($4), or fried squid tentacles ($8). All in all, someone could be seated at the counter and eat enough sushi for a meal in 10 minutes if they wanted.

With Sushi-Rama, Osaka really hit a sweet spot in the city, and the popularity of his conveyor-belt sushi continues. Restaurant Hospitality caught up with the chef as he launches his latest location in Broomfield, Colo., a northern suburb of Denver.

How did you come up with the Sushi-Rama concept?

My business partner, Ken Wolf, he used to come to my restaurant Twelve about once a week, sit at the bar, and we would chat. I said we were going to close Twelve since it wasn't going gangbusters, it was in a transient neighborhood and we never got regular clients. I said I wanted to open a ramen shop and we talked ramen and, because he travels a lot, he was in London and had just seen a lot of conveyor-belt sushi. He was like, let's try that here too. We got Osaka Ramen open in May 2015. We opened Sushi-Rama in December 2015.

What motivated the expansion?

The first one did pretty well, so Ken said, let's duplicate it. We started combing the area and went as far north as Fort Collins and as far south as Colorado Springs. We opened the Denver Tech Center one [in southeast Denver], then opened one in Lone Tree [a southern suburb], then the Fitzsimons location [in the eastern suburb of Aurora].

Why do you think Sushi-Rama has been successful enough in Colorado to have opened five locations?

No one has really done it, or they have done it but not successfully, here. It hits the top three or four main [restaurant categories] of pizza, hamburgers, sushi, and tacos. Sushi is now kind of mainstream. Plus, I have experience in sushi. I could have done any of the other concepts, but we had also started with Jesus Silva on our team at Osaka Ramen, and his expertise was sushi. He helped me open and now Shaun Motoda is the executive chef of Sushi-Rama.

Why has the conveyer-belt sushi concept worked so well for your restaurant and not others in Denver?

I think a lot has to do with the quality of the type of environment we are in. I consider us fast-casual; you can get in and out in 10 minutes if you want. But it's all in the quality, we are getting the same quality fish as Sushi Den and Sushi Sasa [two upscale sushi places in Denver], we are just putting it in a roll or nigiri and on a belt.

We also buy really good rice, that's probably 75-percent of what you eat in sushi. We are getting stuff from the same places as the other guys, and I have a good recipe for the vinegar. It's not too sweet, we back off on the sugar, and it has a good vinegar flavor and a good salt to it. I think we do a pretty good job.

It sounds like an expensive way to run a fast-casual spot.

The costs are a little higher than if we went somewhere else for ingredients, but I think that's what helps us with repeat customers and value. The same with labor: The busier you are, the more you sell. And that helps with our purchasing power: If you are buying for four stores, you can get good deals in bulk. Now we buy rice by the pallet instead of a few bags for each store.

It's like why it took so long for In-and-Out Burger to come here. Traveling their products from California didn't make sense. They built their own supply chain and built a warehouse in Colorado Springs. That's how they can expand so quickly.

Given the nature of take-what-you-want sushi, how did you weather the pandemic?

We shut down and reopened a little later than most restaurants. I decided to lay everyone off so they could start collecting unemployment. I laid off like 200 people.

Then, when we were able to occupy indoors again in late June or early July, we waited a couple weeks to see how people were handling it and what their practices were. We wanted to see what people were up against when they opened up. We waited a whole year to open Denver Tech Center because no one was in the offices. We did offer everyone their job back and about 120 came back.

Did you have to change the model at all?

No. I think people felt very comfortable with a covered plate going by and only having contact with the plate and not a ton of servers or runners. We thought we would have issues with the health department, but they thought it was good too.

With sushi, one of the biggest fears is the safety of the food, so how do you make sure the rolls remain good to eat?

Our plates have always been time controlled. There's a tag, almost like a QR code, but it's a waterproof sticker with a tiny circuit board in it. Each plate has one, and as the dish goes by a sensor, every five to 10 minutes, the machine knows how many rotations were made. When the rotation is close to 90 minutes there's an arm that will kick the plate off. We are allowed to leave it for up to four hours, but we don't do that.

The mechanism is internal and tucked away in the belt. It's those things you don't know about, but it's there, it makes you feel good about it. People don't realize the details we take to keep people safe.

If people have questions we can answer them.

What kind of research went into launching Sushi-Rama?

Overall, we are a pretty basic conveyor belt institution. Kura [Revolving Sushi Bar] in California, they have like 50 locations in about four states, and around 300 in Japan. A lot of purveyors, the Japanese ones, have main offices in California. They are happy to give up info. They supply all the sushi bars and ramen shops. There are some things the restaurants won't share, but they will tell you where they got the conveyor belts, where the sushi machines come from, how to source the plates and lids.

Because Sushi-Rama is mainly self-service, meaning customers mostly interact with the conveyor belt, does that cut costs on labor?

We probably use one less server than a normal restaurant. In Broomfield we’ll have two servers and a host. The food running isn't as often [as at other restaurants] since people are pulling plates off the belt, and the space isn't very big, just 47 seats. Typically, in a regular, sit-down restaurant, a server might get 18 people in a section. That would require about four servers, but we only use two. A lot of the service is hands-off. We want people to engage in who they are dining with and the belt. That's the fun of it.

There's no bar program. The cocktails, beer, and wine are all canned, and sake is standard. Since there isn't someone mixing cocktails in the back, that takes some of the labor needs away, though the drinks still have to be served.

We have machines that cook sheets of rice for us. So the skill level needed in a cook — they aren't unskilled, but the skill level doesn’t have to be [as high as] Sushi Den. I can teach a dishwasher how to roll sushi. The machines make it simple by putting out a sheet of rice, then you put the fish and vegetables in, roll it and cut it.

You can probably do 10 sheets of rice in the time one person does one [without machines]. The machines are around $15,000 each, but it probably saves us 100K in labor a year.

Who are the overall cliental visiting Sushi-Rama?

It's almost different at every store. In the evening, tons of families come to the Lone Tree and Fitzsimons locations. The demographic at Fitzsimons is a lower median income. However, during lunch the hospital staff from across the street come in. We also get a lot of people doing business lunches as people are starting to go back to the offices. In RiNo, [Denver's alternative art district where the first Sushi-Rama opened], it could be anything. There are a lot of creative businesses out there, and a lot of time they don't take lunch till 2 or 3, so it goes in waves. Even on the weekends, it's a fun night out before something because it's so quick. People come in and have dinner 30 minutes before a show or movie or the bar. We do a decent amount of takeout and delivery too, via ChowNow.

How did you end up north in Broomfield?

I had been talking to the guys at Arista [a planned community] up in Broomfield starting six years ago about opening a Sushi-Rama. Then I signed a lease in the fall of 2019. We had started to do demo and construction, but then COVID hit. They were nice enough to let us pause. Then we started up construction again the beginning of this year. Luckily there weren't a lot of supply chain issues since we had purchased the stuff two years ago.

The hard part was with the neighbors and the timeline of pounding nails and digging up concrete. There was a dental office next door and the last thing you want is to hear a jackhammer when getting your teeth cleaned. That's why development took twice as long, we were supposed to open in March of 2022.

Do you have more plans to expand Sushi-Rama in the future?

I think we are going stop at this one for a little bit. We are kind of covering all our bases, North, South, East and Central. We haven't ventured out West, we looked at a few locations like Colorado Mills [shopping mall]. But labor is hard, it's our biggest challenge in the industry. Right now we are paying more, we don't pay top dollar but we are in the middle, and we are trying to close that gap in front- and back-of-house. For now, we are good opening the fifth Sushi-Rama, and we will see what else may come our way.