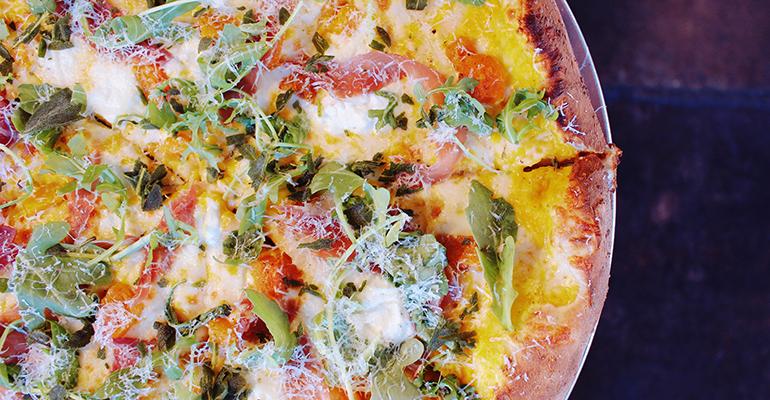 In Atlanta, MTH Pizza promotes chef-driven pies like The Gourdo, which uses a butternut squash base as the carrier for goat cheese, prosciutto and roasted butternut squash.
Operations>Limited Service

Squash, potatoes and Chicago-style Italian beef with giardiniera are among the latest options

The raging popularity of pizza as a pandemic comfort food of choice has been well documented. Sister-brand Nation’s Restaurant News reported that same-store sales of pizza chains in the third quarter of 2020 surged 12%, a noteworthy performance by a mature category during an economic downturn. In late summer, USA Today raised the alarm of a pepperoni shortage, which put Americans’ favorite pizza topping in the same category as toilet paper and hand sanitizer, and independent pizzerias noted pepperoni price increases of 50%. Many operators, however, have offset volatile meat prices with innovative alternative toppings that address major menu trends of the moment.

Vegetable Forward. A number of chefs have embraced pizza topped with squash, which is available all year round in summer and winter varieties. In Atlanta, MTH Pizza promotes chef-driven pies like The Gourdo, which uses a butternut squash base as the carrier for goat cheese, prosciutto and roasted butternut squash. The Acorn Squash Pizza at Triple Beam in Los Angeles doubles down on the cheese, using both mozzarella and cacio di Roma as well as the squash in question, and then adds sweet heat with honey and crushed red pepper. Diners at Ronan, a shared-plates restaurant also in Los Angeles, can split the Zucca Pizza, a white pie that features zucchini and zucchini flowers, lemon and Stracciatella cheese.

Roberta’s, which has shops in both Brooklyn, N.Y., and L.A., picks from a different part of the garden. The East Coast menu boasts the Night Ripper, which has Japanese eggplant and pickled peppers. The White and Greens Pizza at the that location is made with mozzarella, Parmigiano cheese and mustard greens. In L.A., the cheeses are paired with mixed chicories and baby lettuces.

At long last, potatoes seem to be coming into their own as pizza toppers. At Tony’s Coal Fired Pizza in San Francisco, the latest pie emporium from renowned pizzaiola Tony Gemignani, Purple Potato Pizza is made with bacon, rosemary, garlic, feta cheese and pesto, as well as sliced purple potatoes. 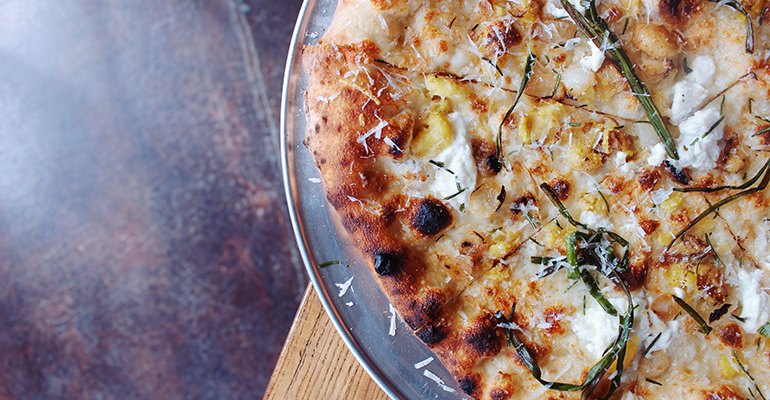 Less colorful but still tasty is the Potato-Mozzarella option at Bonci, the Chicago outpost of a vaunted Roman pizzeria. At nearby PBJ, whose initials reflect the pizza-beer-jukebox ethos to which the operation is dedicated, Loaded Baked Potato Pizza consists of sliced potatoes along with the requisite bacon, white cheddar  cheese and scallions of its namesake side dish. And MTH’s playfully named We Say Potato, They Say Patata uses fingerling potatoes along with caramelized onion, crisped rosemary, charred scallions and ricotta.

Vegan Versions. Atlanta’s Plant Based Pizzeria lives up to its name at both its food truck and brick-and-mortar locations with options like Vegan Meat Lovers Pizza that comprises ground Beyond hamburger, mild Beyond sausage and vegan cheese in roasted basil pizza sauce. Brooklyn-based Paulie Gee’s operates five stores around the country, where patrons can opt for vegan specials like Vegan Freddy Prince, an upside-down Sicilian made with vegan meats, dairy-free cheese substitutes and a sesame-seed crust.  And in Minneapolis, East meets West at fast-casual Bombay Pizza Kitchen that fuses twin trends of Indian cuisine and pizza. There, the Pune Pav Bhaji Pizza marries slow-cooked vegetable curry with red onion, cilantro and a lime wedge.

Crust Matters. Pinsa, or Pinsa Romana, is an Italian style of pizza that has built a bit of buzz over the recent past because of two factors: The ingredients used in the crust and its appearance. The latter reflects the fact that the dough is pinched and pressed, not tossed, typically giving it a rustic, irregular shape. The ingredients include soy, wheat and rice flours, which are said to enhance digestibility for some diners.

In San Francisco, Montesacro Pinseria Romana lists a dozen pinse, including the Mandrione, which is topped with mozzarella and Gorgonzola cheeses along with radicchio, arugula, toasted walnuts and balsamic vinegar.

In Atlanta, MTH Pizza uses a high-protein dough that is fermented for three days to create what local critics have dubbed textural perfection.

Perfection is also the objective at Pizzeria Virtú in Scottsdale, Ariz., where the rigors of desert dryness have led the chef to construct a sealed-off, temperature-and-humidity-controlled room that houses ingredients and utensils and is dedicated solely to making the dough.

Pizza Plus. Some restaurateurs use the crust as a carrier for familiar entrees, providing patrons a kind of comfort-food double header. For example, at Antico Pizza in Atlanta, the popular Lasagna Pizza has layers of meatballs with ricotta and Romano cheeses. Bombay Pizza Kitchen steps outside the box with its Delhi Tikka Masala Pizza that combines vegetables and tikka sauce with choice of tandoori chicken or masala paneer, or cheese. And Passero in Arlington Heights, Ill., features the Chi Town Combo that lures locals with its marriage of Italian beef and homemade giardiniera relish, the iconic Chicago sandwich combination in which the pizza crust stands in for the typical crusty bread.