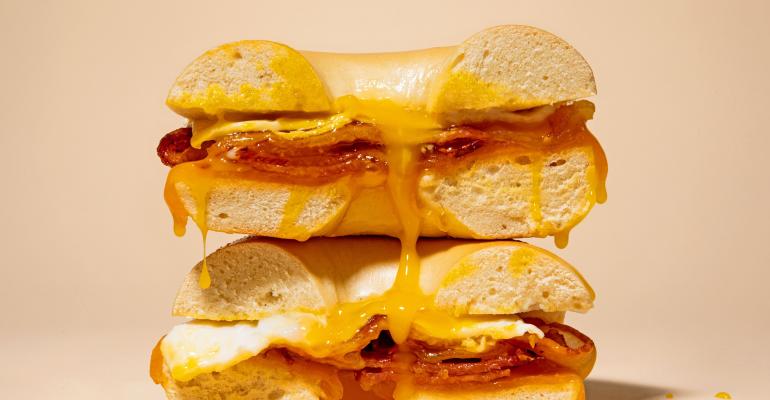 H&H Bagels
New York transplants and other bagel fans will soon be able to enjoy this bacon, egg and cheese in other states.
People>Owners

The five-unit, New York City icon H&H Bagels is looking to bring its New York-style bagels beyond the five boroughs with the announcement of a national franchising program in October.

Since then, H&H Bagels has made headway to expand in its current markets: as the shop’s fifth New York City location recently opened in Moynihan Train Hall inside New York City’s Penn Station and a new wholesale bakery location is coming soon to Queens, New York.

The company also has plans to recruit franchisees and aggressively expand to the top metro markets in the country through franchising, specifically Florida and the Upper Midwest, especially in Chicago, and eventually the West Coast, with a long-term goal of having retail presence in all 50 states.

“We’ve been working on this for five years and it has been a gradual evolution [toward franchising],” CEO Jay Rushin said. “We took the best out of a really bad situation [the pandemic], and it afforded us the opportunity to learn a lot quicker than we would have a normal time.”

Related: Why Mici Handcrafted Italian decided to franchise at 6 units

To New Yorkers, bagels are a bragging point, with many claiming that the special quality of the water is the secret to a superior product. So how will that translate to markets outside of the New York Metropolitan area?  Enter, the wholesale bakery in Queens, where all H&H Bagels will be produced and then shipped to store locations nationwide where they will be finished in ovens on-site: no tap water shipment needed.

Besides figuring out a bagel shipping system, H&H Bagels also spent the pandemic trimming its menu, like many restaurants that struggled with inflated supply chain prices and a locked-down economy last year. Bagel shops in the New York area are known for their multitude of cream cheese flavors, from blueberry to chocolate, and all the classic spreads in between. Rushin said that H&H has cut its menu down by 40% over the last three years to eliminate waste, as he realized many customers liked to stick with the classics: like bacon egg and cheese, or a shmear of cream cheese and lox on a plain bagel (The plain bagel, he said, is their number-one seller).

Recently, H&H also started moving toward a “Chipotle-style” assembly line mode of operations, which allows for a more efficient output.

“The bagel business has more modifiers than just about any other food business because you can toast it or not, heavy spread or light spread, etc., so there's a lot of room for mistakes,” he said. “We thought this model where you're making the sandwich facing the guests will cut down on those mistakes.”

As H&H Bagels looks to expand nationally, Rushin said that he is completely open to signing on new franchisees with little to no experience but is also hoping to entice experienced franchisees to add brands to their portfolio and raise the profile of the brand.