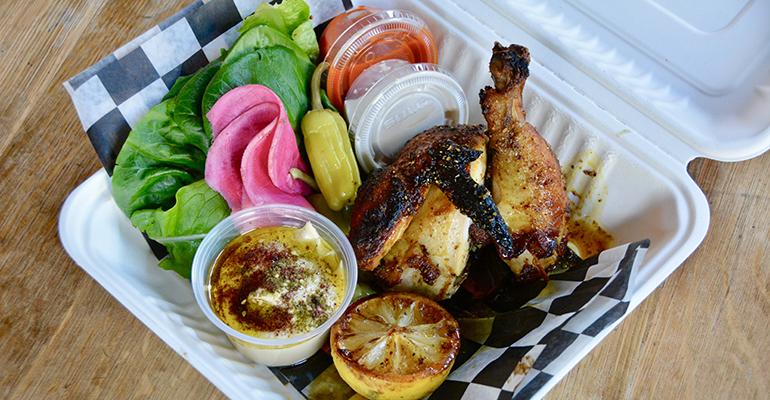 A spinoff of the fine-dining venue Avec, the new concept focuses on family meals and to-go items

When the coronavirus shut down indoor dining in the city of Chicago, Avec restaurant — owned by Paul Kahan’s One Off Hospitality — had to transition quickly like the rest of the world. The tiny fine-dining restaurant began offering delivery for the first time and, with that, came the roll out of the fast-casual brand Avec Rotisserie, offering a menu made for consumers on the go.

In the works pre-pandemic, Avec Rotisserie was the result of months of research and development by Chef Perry Hendrix, who serves as One Off Hospitality’s creative culinary director. It was initially designed to be the restaurant group’s first virtual brand.

“The original intention was that, Avec would operate on the first floor, just as it had been running. And then the second floor we could still execute Avec Rotisserie [out of the kitchen], as well as cooking for our private dining room,” said Hendrix.

That all changed when COVID hit in March.

With the restaurant being forced to close down indoor dining and begin delivery and takeout — a first for the restaurant, but something Hendrix said will continue for the foreseeable future post-COVID – the entire Avec menu became a virtual experience.

And Avec Rotisserie was uniquely built for COVID times, a moment of spooky foresight from Hendrix, in that it caters to larger, family meals and items that travel well, like hummus and pita.

“I think everyone's just been in the total brain scramble situation of, let's figure out what people want. There are Michelin star chefs that are selling hamburgers,” said Hendrix. “We’d already put the thought work into [Avec Rotisserie], so it was nice that it didn't seem like a total scramble.”

Fresh, hearth-baked pitas (there was already a hearth on the second floor in the second kitchen of Avec that served private events) with hummus and toppings were the first items Hendrix knew he wanted on the menu. Slowly, he added mezze and whole rotisserie chickens.

The procurement of a rotisserie came about in a serendipitous, if not all too familiar, way.

When COVID closed a friend’s restaurant in a food hall, Hendrix purchased the rotisserie.

As of December, the brands are beginning to separate. Though they share the same space online, the success of the offerings has led Hendrix to believe that Avec Rotisserie can, in fact, live in its own brick-and-mortar space one day soon rather than remain a virtual brand.

“Initially, to get the concept going [the team moved fast] and now we're reupping our commitment to [Avec Rotisserie]. We have been offering it all along, but now we’re creating a separate brand and trying to gain more excitement behind it,” said Hendrix.

While there were half roasted chickens on the menu at Avec pre-pandemic, the restaurant only sold between 12 and 20 of them during a business day. With the introduction of Avec Rotisserie and delivery, there are upwards of 40 whole rotisserie chickens being delivered on a daily basis, Hendrix estimates.