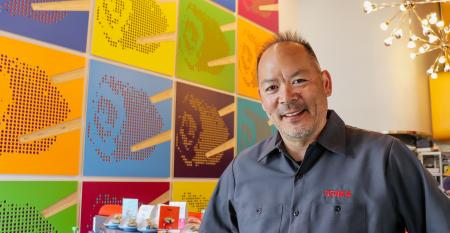 Jeff Osaka explains the success of conveyor-belt sushi concept Sushi-Rama
Nov 30, 2022
The owner of the Denver-based chain prepares to open its fifth location

FoodWorks allies with local eateries to promote produce consumption
Oct 26, 2022
Program gives restaurateurs with health and sustainability focused menus the opportunity to offer their creations to customers in workplaces, hospitals, colleges and other onsite environments

Hai Hospitality to open Uchiko in Plano, Texas
Oct 14, 2022
Austin-based group’s third unit of the concept to debut at the Legacy West development in summer of 2023

Former ThinkFoodGroup COO Hollis Silverman plots her own course with Eastern Point Collective
Oct 14, 2022
The veteran operator shares her vision of how she thinks restaurants should be run

Power List: Founders who are changing the restaurant industry
Oct 04, 2022
Restaurant Hospitality presents 26 restaurant groups still overseen by the people who started them

How the creator of the ‘fine-fast-casual’ category is tackling franchising
Sep 12, 2022
Chef Gregoire Jacquet announced that his eponymous restaurant is franchising, and he is using the hub and spoke model to...