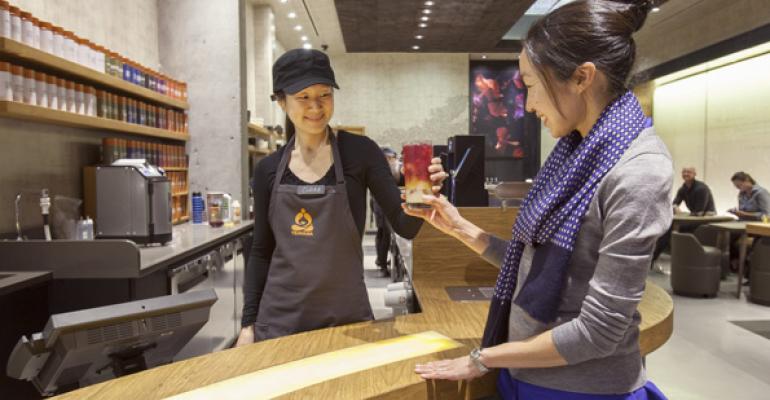 Baum+Whiteman is the latest trend spotter to unveil its annual predictions for the New Year. The leading food- and restaurant-consulting firm says luxury is the common thread among their 12 trends, from high-priced tasting menus to theatrical dining experiences to high-priced chicken treatments.

2. Proliferation of tasting-only menus: A three-year bull-market is fueling a proliferation of tasting menus around the country. It’s great for restaurants’ economics, guaranteeing a specific average check along with pre-costed and highly controlled inventory. As five-percenters wallow in capital gains, no one cares about cost: $270 at French Laundry with a $175 supplement for white truffle pasta, $208 for the Grazing, Pecking, Rooting menu at Blue Hill at Stone Barns, $185 for the all-veg menu at Grace in Chicago, $248 at Saison in San Francisco to name just a few. Now there will be trickle-downs at less elite restaurants with tasting options to a la carte menus, costing the same as filling up your SUV.

The humble bird is going haute. Rôtisserie Georgette, a new upscale chicken-focused restaurant in Manhattan, is no mere takeout joint. Run by Georgette Farkas, Daniel Boulud’s former right hand, it has grand space, two rotisseries and a French-accented menu with occasional fried chicken specialties. The $79 roast chicken for two with foie gras at Nomad that arrives looking like Christmas is the restaurant’s best seller by far. If this were just a New York thing, we wouldn’t much care. But chefs around the country are ramping up prices as they play flavor one-upmanship. Poulet Vert ($24) at Marlow in San Francisco is marinated in an anchovy-green sauce. In Boston, Cragie on Main’s roast chicken for two ($74) is cooked sous vide in chicken fat and spices, then finished with butter and togarashi salt.

6. Bubbling, fizzing beverage trends: With Starbucks committed to converting America to tea, look for others to amplify the attention.  Teavana opened a t a bar/cafe in Manhattan, and  more will follow.  Smart bartenders  will look at  Teavana and competitors’ multi-flavored fruit and herbal blends as convenient bases for boozy cocktails and chefs may use them for basting. The latest fixation of artisan bartenders is making bespoke vermouths and stocking dozens of other branded and mostly obscure items. SodaStream contraptions have consumers experimenting with sodas at home, but restaurants are also crafting sodas using house-made fruit syrups and infusions. Inoculating beers with wild yeasts and aging them in wood, craft brewers are turning out fragrant but really sour beers. Juice bars are no longer for health nuts and body cleansers. Lots of investors are pouring into pressed juices now that millions of people—too busy to eat an apple or carrot, but willing to pay someone to juice it for them—are demanding fresh fruit and vegetables in profuse combinations. Behind the bar, mixologists, mostly in hotels, are bottling their own small-batch carbonated cocktails. Also: flavored ice cubes, misting flavored essences over finished cocktails and gin and tonic bars. Hard cider will take off next as beer brewers  enter the market to protect their businesses.

Food is not enough. Restaurants are enhancing the dining experience by fiddling with our senses and redefining “eatertainment.” Avant garde restaurant Ultraviolet, in Shanghai, shanghais 10 high-spending diners nightly to a secret room that radically shifts moods with each course through lights in the floor, 360-degree high-def projectors, swings in temperature, four smell diffusers, 22 speakers, LEDs and more. Chef-owner Paul Pairet calls it “psychotasting.” There are lesser examples, like the Roca brothers of Can Roca in Spain, who have projected images onto their dishes of food to heighten the experience, or David Bouley’s private dining room, called The Pass, which contains a giant screen so guests in New York converse in real time with growers and vintners whose products are on the table—even if the supplier is in Japan.

11. New wave of Asian flavors: TGI Friday’s offers Sriracha aioli and kimchee’s gone mass market, on pizza, burgers and oysters and in grits and tacos. A new wave of Asian flavors (and menu items) is upon us. Better learn about gochujang—a sweet-spicy Korean amalgam of fermented hot chili paste and soy—jumping from bibimbap to bbq. Shichimi togarashi—Japanese seven-spice of sesame seeds, ginger, nori and hot peppers—is sprinkled on chicken wings, salads, grilled fish. Shisito peppers will mainstream as snacks and garniture, while Sansho is a slightly milder Japanese version of the Szechuan pepper.

12. Look again at Mideast cooking: Forget Spain and Greece. The south side of the Mediterranean and the Levant are where new tastes and dishes are coming from: Turkey, Israel, Morocco, Iraq, Iran. Israel exports not just high tech, but its innovative “New Israeli” cross-cultural cuisine, absorbing ideas and techniques from all over the region. Families fleeing turmoil in Tunisia, Egypt, Iran and Iraq are bringing their splendid food here. Syria’s displaced people may provide another wave of culinary excitement. Explore Turkish street food for ideas. The cookbook “Jerusalem” is flying out of bookstores and you need to read it.