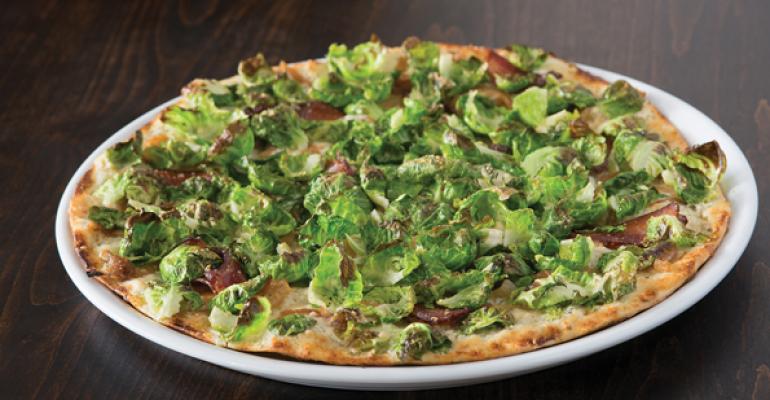 <p> California Pizza Kitchen rolled out a Brussels + Bacon pizza to capitalize on the growing appetite for the long-misunderstood vegetable.</p>
Archive

Healthy proteins, novelty grains, flatbreads, bowls and skewers are among the dominant trends identified by menu consultant Nancy Kruse at the recent MUFSO conference in Dallas.

The U.S. represents the largest market for protein—“We can’t get enough of it,” Kruse noted—so it’s no surprise that about 20 percent of new retail food product introductions in the last year have involved proteins. Similarly, she said, Technomic found that the presence of protein-rich foods on menus has increased 67 percent in the last five years. Kruse attributed this trend to a sense among the general public that proteins are healthy, diet-friendly choices.

Another trend being driven by health concerns is the proliferation of whole grains and less-familiar alternatives such as quinoa, teff and other so-called ancient grains.

A big push for those alternatives is coming from gluten avoiders. Kruse cited findings from NPD that about a third of American adults want to reduce or eliminate gluten from their diets, despite the fact that only about 1 percent of the public has celiac disease and another 3-5 percent are sensitive to the substance.

Some restaurants and chains are rolling out less-processed versions of popular grains, such as rice, but Kruse warned against introducing wholesale menu changes without considering the audience. Panda Express, for example, has balanced demand by offering guests a choice of brown or white rice with meals.

“It’s about options,” Kruse observed. Customers don’t like restaurants to make decisions for them.

Produce is another category getting a boost from healthy eating concerns, she said. It’s turning up in less-obvious spots, such as breakfast, on pizza and as the main ingredient in sandwiches. Avocados, which Kruse chose as ingredient of the year, are playing up to consumers’ appetite for something fresh and healthy.

The key to success in menuing vegetables is innovation, she said. “If you want your customers to eat and enjoy vegetables, you need to treat them with the same creativity, the same relentless innovation as you do proteins,” she observed.

Other ingredients that Kruse sees making more appearance on menus are Sriracha, now popping up even on mainstream chain menus; pretzels, especially pretzel bread; and craft beer in cooking, such as beer-steamed brats.

Among presentations growing in popularity are flatbreads, bowls and skewers.

Kruse says flatbreads are “getting a second wind; consumers love them because they are like 21st century pizza, thin and healthful.” The good news for operators and consumers alike is their versatility: No topping is off-limits.

Food served on skewers and sticks feeds into cravings for hand-held, informal, fun fare. “There’s just something fun and engaging about a baby Monte Cristo on a stick,” Kruse said, mentioning an item from Yard House’s late night menu.

”All themes seem to lead back to the notion of health,” Kruse said. Stealth health dishes, an emphasis on grains, functional ingredients and lighter entrees follow this theme. For a clue to what’s next, Kruse advised keeping an eye on chefs at independent restaurants, but she suggested following moves by multiunit operators, small chains and on-site feeders, particularly college foodservice.