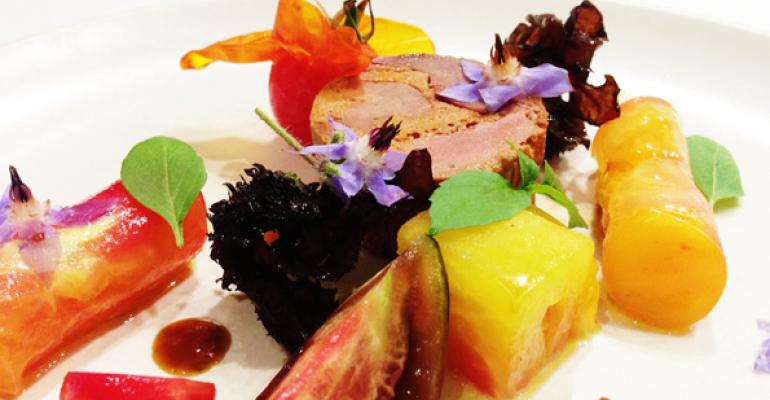 Restaurant trends to watch in 2014

Andrew Freeman is at it again. His San Francisco-based hospitality- and restaurant-consulting firm, AF&Co., just released its seventh annual list of trends that will shape the industry in the coming year. Titled “Blurred Lines – the dishes, drinks and digs that will be breaking down barriers in 2014,” the comprehensive report examines how traditional lines are being blurred to create connectivity, authenticity of experience and smooth integration across various platforms.

“This year’s trends are about the experiential,” says Freeman, one of the industry’s top trend watchers. “As technology continues to infuse every aspect of our lives, clientele are looking for deeper personal connections as the barriers between what is private and public become increasingly blurred.”

Without further ado, here are his calls for the top food, drink and restaurant trends heading into 2014.

Gone are the days when there was always a chicken dish on the menu for picky eaters. Restaurants are playing to more adventurous eaters and diners’ palates have risen to the challenge. At Empire State South in Atlanta, you’ll find catfish, pork belly and even goat on the menu, but not a chicken dish in sight.

Cobb karma: Newfangled Cobbs are knocking Caesar off its pedestal as the king of salads. The just-opened Park Bistro & Bar in Lafayette, CA jazzes up their Chop-Chop Cobb Salad with crispy avocado, while The Mix-Up at Phoenix’s The Royal Palms spices up the classic Cobb with jerk chicken and Scotch bonnet peppers.

Haute homey: Chefs are going back to childhood and having fun with familiar favorites. Highbrow versions of classic comfort foods are popping up all over menus, from appetizers to dessert.

Mutant morsels: Chefs all over the country have gone mad scientist, creating hybrid versions of longtime crowd pleasers. By now everyone has heard of the cronut (part donut, part croissant) and its creator, Dominique Ansel, is already onto his next hybrid creation: the Magic Soufflé.

We all scream for ice cream sandwiches: Move over cupcakes and donuts, there’s a new treat in town: the ice cream sandwich. Coolhaus Ice Cream Truck in Los Angeles, New York, Miami and Austin takes this trend mobile and has creative cookie flavors like potato chip and butterscotch.

Up the ante on chips ‘n dip by subbing in alternatives to the traditional fried spud, tortilla chip or crostini. Beef tendon crisps are the perfect vehicle for Chef Robin Song’s beef tartare at Hi Lo in San Francisco, CA.

Let’s get oiled up: For cooking and finishing, chefs are going beyond olive oil. The flavors of avocado, hazelnut and benne seed oils elevate dishes to new levels. Even mixologists are getting into the action with oil-enhanced cocktails.

The oldest form of cooking in the world: Everything old is new again. Going beyond pickling, chefs are fermenting just about everything these days. At Perbacco in San Francisco, chef Staffan Terje takes a page from the ancient cookbook ‘Apicius’ by experimenting with the fermented fish sauce known as garum, using it to braise meats and give dishes a deeper flavor.

Ahh…veg out! It’s easier than ever to get your veggies: these traditional sidekicks are finding their way into cocktails, taking the place of meat in traditional dishes and adding an edge to desserts.

Not your grandpappy’s BBQ: Chefs are taking classic barbecue techniques to new heights by showcasing regional nuance and bold flavors. Barbecue culture is moving beyond roadside shacks and backyard smokers.

Gettin’ nutty with it: It doesn’t just come from a cow. Pastry chefs, baristas and bartenders are playing around with nut milks. The pecan-bourbon bread pudding at Sazerac in Seattle gets its nutty flavor from house-made pecan milk.

Everything under the sea: It’s our most precious resource and chefs are using it wisely and innovatively. From sea beans to fish cheeks, chefs are exploring the full bounty of the ocean and how to keep it a lasting resource.

Old-school service meets new school standards as restaurants are breaking down the barriers between the kitchen and the diner with an updated return to tableside preparations.

Niche ethnic: Forget about your run of the mill Chinese or Mexican spots, chefs are highlighting the lesser-known culinary traditions of countries like Macau and specific regional cuisines like Northern Thai. Chefs are also exploring more exotic spices and flavors like Calabrian peppers, Gochugaru flakes and Guajillo and Achiote.

Split personalities: Whether it’s a casual café by day that transforms into fine dining by night or a restaurant that shares its space with a retail shop, restaurant real estate is doing double duty. The Pass and Provisions are two unique restaurants under one roof, one fine dining, the other casual, led by the same chef duo in Houston.

Who doesn’t love a classic comeback? Iconic favorites will be making a comeback in 2014, with the reopening of old standards under new management. Fresh facelifts prove everything old is new again. Later this year, New York’s celebrated Tavern on the Green will reopen as a smaller, 250-table restaurant.

It’s a movie; it’s a painting; no, it’s live art! Take artwork digital by using projection for still and moving pieces—it’s easy to keep things changing without breaking the bank. Oak in Dallas fittingly projects an image of an oak tree on their wall with a digital piece by local artist Robert Myers.

Beyond the tipping point: Are restaurants, servers and diners ready for an update to our tipping culture? This hot topic has the industry buzzing and we certainly haven’t heard the last of it. Look for a move toward pooled tips and service charges.

The year of the brasserie: Diners are clamoring for the casual sophistication of the brasserie. Whether you crave steak frites or just a see-and-be-seen atmosphere, this style of restaurant appeals to the Francophile in all of us and will continue to grow in the coming year.

Raise the bar, lower the lounge: When real estate is at a premium, make the most of your space by going vertical. Restaurants are getting a height advantage by using basement and second story bars to create more seating, a bigger dining room and a fatter bottom line.

Don’t get drunk on an empty stomach: Chefs are getting into the bar business in a big way. We’re seeing a plethora of chef-driven bar concepts that offer thoughtful bites to pair with complex cocktails and wine programs. Similarly, traditional bars and wineries are adding composed dishes to their repertoire to enhance the tasting experience and encourage patrons to linger.

Perk up, eat up: As small batch roasters go mainstream and the public’s interest in esoteric coffees brews, the food at your local coffee shop gets fancier too.

Chef coat goes lab coat: Restaurants are getting serious about the science behind cooking. The new flavors, techniques and textures coming out of culinary laboratories are the future of food. Chicago’s Grant Achatz incubates new dishes for his world-famous Alinea in a custom outfitted culinary laboratory.

Ice isn’t just for chilling: Bars and restaurants are infusing their cubes with herbs and other ingredients to enhance the flavors or their cocktails.

Worth their weight: No need to commit to just one varietal or region—pay by the ounce and sample as many wines as you can handle. Claudine in San Francisco makes the most of trendy wines on tap by charging just $1 per ounce during happy hour.

No longer the sole realm of Napa, more and more states are contributing to the growing American wine movement. Restaurants that have long embraced a locavore ethos are revising their wine lists to match. Brooklyn’s Seersucker has an all-American wine list, with a majority of bottles from New York’s North Fork and Finger Lakes regions.

Flights of fancy: Offer up flights of unusual and small batch spirits, maybe even pairing them with food, and let a night at the bar become educational.

Tea time: Tea is topping off cocktails and making a big splash whether served hot or cold. Charleston’s soon-to-open brewery Edmund’s Oast is brewing beers they call “Lords Proprietors” made with tea from Charleston Tea Plantation.

For more on Freeman’s list of trends, check out this webinar >>