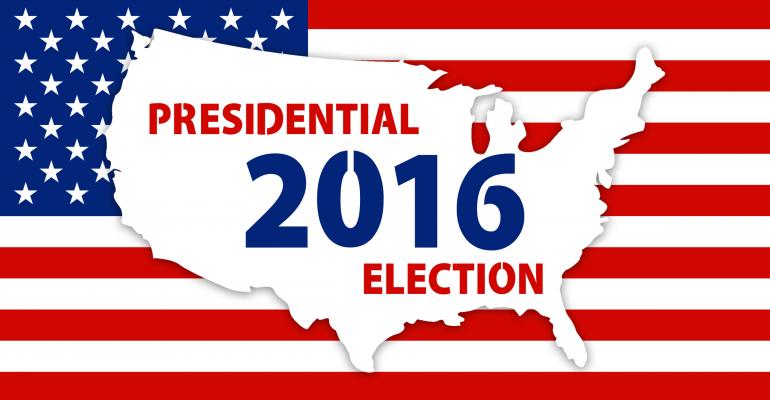 Key issues on the line in today's election

Minimum wage, workplace issues could be decided at the polls

Restaurant operators on Monday braced for what will no doubt be an emotional Election Day, offering admittedly unscientific previews of potential results and freebies to encourage Americans to get out to vote.

On Tuesday, the nation will choose its 45th president and determine control of the Senate, as well as a slew of more local ballot initiatives that will have an impact on the restaurant industry.

Minimum wage hikes will be on the ballot in four states, for example. In Arizona, Colorado and Maine, voters will be asked to increase the minimum wage to $12 per hour by 2020. In Washington State, the ballot initiative is for a $13.50 per hour wage floor by 2020.

The election will likely impact the future of the federal minimum wage, as well as broader issues important to restaurants, including immigration reform and healthcare.

Labor attorney Marc Zimmerman, based in New York, said a host of important workplace issues are also on the line.

“The next U.S. president will have an uncharacteristically broad mandate to shape the long-term and immediate future of federal labor and employment laws,” said Zimmerman in a statement.

“In addition to addressing targeted issues such as the federal minimum wage, federal overtime regulations, paid family leave and the Affordable Care Act, the successful candidate likely will make a significant number of appointments both to the U.S. Supreme Court and National Labor Relations Board, who could have near-immediate impact on issues of joint employment and employee classification, and whose values, philosophies, attitudes and ideologies could reinforce, or completely shift, its jurisprudence for many years.”

No one candidate is a clear favorite for the industry, as indicated by a bipartisan National Restaurant Association pre-Election Day video.

Some in the food industry played a role in Election eve campaign events on Monday.

Andy Puzder, CEO of CKE Restaurant Holdings Inc., parent to the Carl’s Jr. and Hardee’s chains, on the other side, laid out his reasons for supporting Donald Trump in an article in Real Clear Politics.

Starbucks chair and CEO Howard Schultz, meanwhile, started the week with a letter to employees making an impassioned plea for unity.

“Let’s each embrace the universal virtues of respect and dignity, refusing to allow the hatred on cable news, the ugliness of our politics, and the lack of political role models for our kids to define us and to dictate how we treat each other,” he wrote.

For many chains, including Starbucks, Tuesday will be a day of freebies.

Guests with their “I voted” stickers will be able to get free or discounted food or drink at BurgerFi, Firehouse Subs, Krispy Kreme, Chick-fil-A, Burger Lounge, Bob Evans Restaurants and Ben & Jerry’s, just to name a few.

The 7-Eleven convenience store chain is offering a free coffee, latte, cappuccino or hot chocolate to those who order through the chain’s mobile app.

Over the past few weeks the chain has offered its annual coffee cup poll that encourages guests to “cast their cups” by choosing blue Democrat, red Republican or nonpartisan purple cups through the end of the day Tuesday.

On Monday, the chain said the purple “Speak Up” cup has been selected most often this year. But among those choosing red or blue, the Democrats have a slight lead going into Election Day, the company said.

Over the past four elections, the c-store chain’s cup poll has accurately predicted the results, 7-Eleven officials noted.

Noodles & Company is offering a comforting comfort food promotion featuring various macaroni-and-cheese recipes. In surveys, the chain found that 45 percent of Americans said they’d prefer to share their mac and cheese with Hillary Clinton rather than any other presidential candidate.

Noodles is offering a buy-one, get-one-free coupon through Nov. 16.

The Anaheim White House restaurant in Anaheim, Calif., which has famously hosted a number of U.S. presidents for dinner, is also offering a prix fixe menu Tuesday.

Guests can choose between the Hillary Clinton (tempura artichoke, salad, braised beef short rips in a cabernet reduction or cioppino and crepes Suzette) or the Donald Trump (Portobello ravioli, salad, Mediterranean sea bass or hangar steak with a chianti and game infusion and beignets).

Guests over 21 with an “I voted” sticker will get a free bottle of champagne. Live coverage of the election will be shown on several large-screen TVs throughout the white-tablecloth restaurant.

On Monday, restaurant officials said pre-orders indicate a very close race, though leaning toward Clinton — even though Anaheim is traditionally a Republican stronghold.

The nine-unit Dinosaur Bar-B-Que chain on Tuesday is offering an Election Wing menu featuring Right Wings, Left Wings and the “F*ckItBuckIt” with both, because, as the company notes: We’re all in the same bucket.

The Bananas Smoothies & Frozen Yogurt chain operated by Villa Restaurant Group, however, is looking forward to Wednesday when hopefully Americans will know who their 45th president will be.

For 45-cents on Nov. 9 the chain will offer a limited-time smoothie called “Orange You Glad It’s Over?”