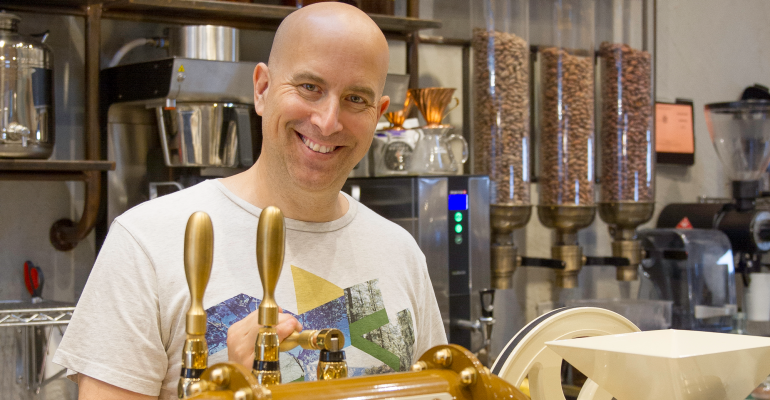 To Oded Brenner, Blue Stripes is more than a chocolate shop. It’s the resurrection of his career. The New York City store, which opened in late June, is a comeback for Brenner, who is returning to chocolate-making after a forced five-year hiatus.

Brenner co-founded Max Brenner, a chocolate bar and restaurant, with then-business partner Max Fichtman in Israel in 1996. The brand grew into a successful international chain that Brenner sold to Israeli food and beverage company Strauss Group Ltd. in 2001.

The chocolatier stayed on as a consultant to build the brand and had an amicable relationship with the company, but things grew sour when Brenner began a new business — Little Brown Chocolate Bakery and Coffee — in New York City in 2011.

Strauss Group sued Brenner, claiming the shop was a breach of contract. After a long court battle that led to a settlement, Brenner signed a non-compete agreement with the company in 2012. The terms of the agreement stipulated that for five years, Brenner was not to pursue any chocolate-related venture or use his face or name in a way that promoted a new brand.

“It was a very big blow for me and my family both financially and emotionally,” said Brenner in an interview with The Times of Israel. “All of my money and equity was in Max Brenner, and because of the settlement I lost everything and really had to change my life.”

Unable to “say, make or tell anyone about chocolate,” Brenner spent a lot of his time with his family in New York City, telling his daughter Nellie stories about his journey and career as a chocolate maker, according to the Blue Stripes website.

When it came time to return to the chocolate world, the short stories Brenner wrote about his life for his daughter were the inspiration for Blue Stripes. With backing from First Foods Group, Inc., a restaurant management and concept development company based in Las Vegas, the concept opened in the spring, just a block away from Max Brenner.

In the development of the store, Brenner wanted to do something different than what he’s done before.

“I was kind of the Willy Wonka of chocolate,” Brenner said. “To do it again was boring.”

Taking note of how the restaurant industry is moving toward simplicity and approachability with food, Brenner wanted to create a casual, everyday atmosphere. Blue Stripes looks like a coffee shop, but Brenner has branded it as a “cacao shop.”

The chocolatier wants to let customers know that cacao is a fruit that is delicious and healthy by letting its fruity qualities shine on his menu. The latest cacao creations that Brenner is bringing to Blue Stripes incorporate not just cacao beans, which are used to create chocolate, but also the pulp and shell of the fruit — parts that are usually thrown away.

Take a look inside Blue Stripes and its new menu items.