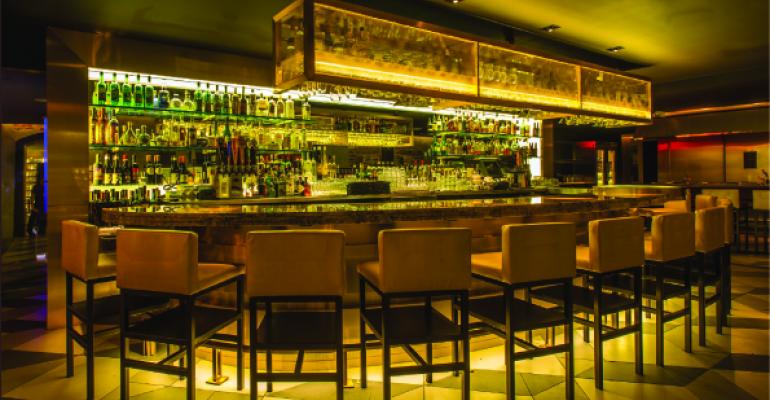 <p> SoBou offers innovative ways to access cocktails and other beverages, but traditionalists feel right at home at the bar.</p>
Trends>New Restaurant Concepts

The idea behind SoBou: Cash in on the lucrative craft cocktail craze and expand the company&rsquo;s footprint into the tourist-heavy French Quarter. &bull; More restaurant drink trends

In the ever-evolving restaurant business, even those fortunate enough to own one of the country’s most iconic fine-dining operations feel compelled to look for new avenues of growth. Ti Adelaide Martin and her relatives and partners in the New Orleans-based Commander’s Family of Restaurants unveiled their company’s new direction earlier this year. First, they opened a new full-service concept, “modern Creole saloon” SoBou, in New Orleans. Almost concurrently came the kickoff of Commander’s joint venture with fast-casual pizza chain Reginelli’s.

The idea behind SoBou: Cash in on the lucrative craft cocktail craze and expand the company’s footprint into the tourist-heavy French Quarter. The Reginelli’s deal enables the Commander’s organization to expand the well-regarded pizza brand outside its seven-store home base in New Orleans. 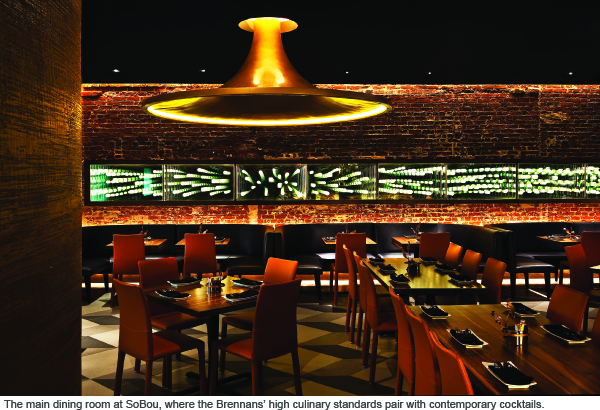 And who better to lead the development of a cocktail concept like SoBou (the name refers to its South of Bourbon Street location) than Ti Martin, author of In The Land of Cocktails? Craft cocktails are huge nationally, and Martin and company found a way to build an entire restaurant concept around them.

“This is an establishment our team has been dreaming up for years now—a serious restaurant where the beverage program is not an afterthought,” Martin says. “We call it cooking with Louisiana DNA and adult beverages. Guests can come for cocktails and nibble on snacks like pig-fried pecans, or they can enjoy a multicourse dinner with wine pairings.”

The “Snacky Things” portion of SoBou’s menu ranges from Pork Cracklin’ (menu description: “crispy pork skin…it is what it is,” $1) to Blue Crab Mousse in a Jar (ghost pepper caviar and herb-painted crackers, $8). A $8 Muffaletta Chop Salad is the star of the “Soups & Salads” section.

There are 31 items in all, including a popular $9 Chocolate Coma Bar for dessert. The restaurant can seat 163 patrons in its five separate dining areas.

It’s a good thing SoBou’s menu strikes a balance between traditional and contemporary tastes, because the food has to hold its own against a staggering array of beverage choices. The cocktail program is the brainchild of Commander’s mixologist extraordinaire Lu Brow and in-house bar chef Abigail Gullo. They’re going all out with house-made tinctures and bitters and a variety of barrel-aged cocktails. Non-cocktail drinkers can busy themselves with SoBou’s self-serve wine machines and an indoor beer garden where the booths are equipped with built-in beer taps. Even teetotalers may be convinced to go with the flow at SoBou. 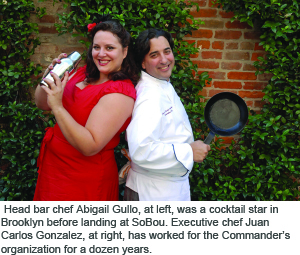 An undertaking of this magnitude would be plenty for most restaurant operators to handle, but Martin and the Commander’s gang had another deal in the works. Late last spring, they announced a partnership with Reginelli’s, a local fast-casual pizza chain. It’s a high-quality operation (named the nation’s top independent pizza restaurant in 2007) whose standards match those of Commander’s.

“While our experiences may come from different ends of the dining spectrum, the company cultures—striving to be the very best in your category by developing strong leadership teams—are cut from the same cloth,” Martin said when the deal was announced. ‘We see great potential for strong measured growth beyond New Orleans together.”

It’s already happening. There are now two Reginelli’s stores operating in Baton Rouge, and the Houston unit is scheduled to open this fall. When the Houston media asked Alex Brennan-Martin if running a pizzeria would undercut the Commander’s Palace fine dining brands, he responded with just four words: “Danny Meyer—Shake Shack.”

He was telling them that, done with excellence, there’s no downside to operating a quality fast casual restaurant even though you’re primarily a fine dining company. And Martin is also telling his fellow operators that smart restaurant businesspeople would be wise to find a quality fast-casual concept to partner with while they can. It’s a growing and profitable part of the market that even prestigious operations like Commander’s can’t ignore.