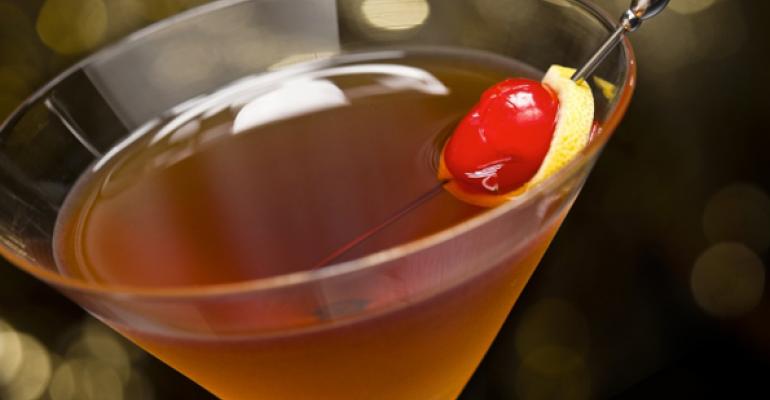 Manhattans, Sazeracs and gimlets are on the comeback trail.

Just as midcentury design has captivated a new generation of fans, popular drinks of the past are seeing a renaissance on menus, according to new research from Mintel Menu Insights.

Cocktails described as “classic” have increased by a whopping 76 percent on menus since 2009. Manhattans are on 25 percent more menus, gimlets are up 63 percent, Sazeracs 57 percent and sidecars 50 percent.

Mixologists are a big factor driving the retro movement.

“Bartenders and cocktail geeks are taking a very academic approach to mixing drinks, and many are learning the history and the evolution of iconic cocktails,” says Kathy Hayden, senior foodservice analyst at Mintel. “This approach combines with better ingredients, some nostalgia for a time when people had time to enjoy cocktails and cocktail parties and widespread interest in ‘cocktail culture’ to boost interest in the classics.”

Among survey respondents who have ordered a drink at bars/nightclubs, 54 percent ordered a beer in the last three months, making it the most widely accepted alcoholic beverage. Cocktails are also popular, with 44 percent of people saying they’ve ordered one in the same timeframe.

“The sweet flavor profile of cocktails like Margaritas and Lemon Drops makes them a selection primarily driven by women,” adds Hayden. “Additionally, women, who are more likely to be calorie conscious, are feeling they have more options for alcoholic beverages with the emergence of skinny cocktails and light mixers.”

During this past sweltering summer, some seasonal, fruity favorites have fared well, while others have been falling from favor. Mojitos have shown a 32 percent increase since 2009, and this new classic is already showing up in different flavor options beyond the normal lime and mint. Mai Thais and Margaritas are also on the rise, appearing 18 and 24 percent more frequently on menus, respectively. On the other hand, traditional tropical favorites like the Piña Colada and Daiquiri are down 28 and 19 percent, respectively.