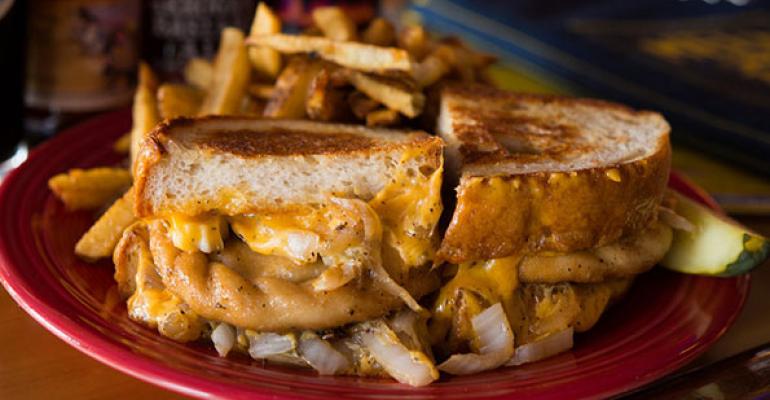 Combine that with the nostalgia one gets when thinking back to their childhood lunches, and it’s no wonder grilled cheese sandwich concepts are popping up around the country.

“I’m a little dumbfounded when I see them continue to pop up. I don’t necessarily know why,” says James DiSabatino, owner and chief cheese griller at Roxy's Gourmet Grilled Cheese in Boston, which started with a single food truck in 2011 and expanded to a second truck and finally a brick-and-mortar store in Allston, MA, in May. “I did it because there was nothing like it in Boston. Others are doing it because they’ve seen someone else do it successfully.

Grilled cheese sandwiches run the gamut from super simple to complex masterpieces filled with primo ingredients. They can be served quickly or, presented right, they can fit into a chef-driven, fine-dining environment.

The popular concepts today each have their own story and fit nicely in their respective niche. There is no clear distinction on who came up with the idea first, but clearly the success of one led to the introduction of the next.

“Everyone loves grilled cheese,” says Kerri Martin, v.p. of marketing at The Melt, a San Francisco-based chain with 15 stores and plans to grow outside of California by the end of this year. “It's this simple, memorable food that, when done right, is magical. Nothing else eats like it—a crispy, gooey, buttery, toasty symphony of taste and texture."

Don’t get The Melt confused with Cleveland-based Melt Bar & Grilled. They are totally different concepts on opposite sides of the country.

“Some of these places have great variations on their menu. It can be quite simple but also can spin out of control,” says foodservice analyst/consultant Dennis Lombardi, executive v.p. with WD Partners. “There are a large number of protein items to add on to a grilled cheese, so what’s important is striking that balance but not letting your SKUs get out of line.”

Melt Bar & Grilled, with four locations around Cleveland and a fifth in Columbus, is adding more than just protein to its sandwiches. There’s the Parmageddon, which features a potato & onion pierogi; the Caribbean Jerk War Pig, which features jerk spiced pulled pork and seared pork belly; and the The Dude Abides, featuring homemade meatballs and fried mozzarella wedges.

But at California’s The Melt, the craziest it gets is macaroni, Portobello mushrooms or short ribs. Instead, the focus at The Melt is on quality, aged cheeses and artisan bread in a fast, lunch-friendly environment.

"Great grilled cheese is simple but not easy. It starts with the best cheese, melted and toasted to perfection," Martin says.

Many of the popular and growing grilled cheese concepts today received at least a little boost from appearances on TV.

Melt Bar & Grilled appeared on both Diners, Drive-ins and Dives and Man vs. Food in 2009. Owner and chef Matt Fish had just opened his second location on the East side of Cleveland to alleviate the rush at his first location on the West side.

“It definitely didn’t propel us from 0 to 60, but maybe from 65 to 75 or 80,” Fish says of the TV exposure. “It opened us up to a different type of person. It helped us out on a national level, exposing us to people who were traveling to Cleveland maybe for the Rock & Roll Hall of Fame or another attraction. They’d say ‘I’m going to Melt because I saw them on TV.’”

Roxy’s, which claims to be the first food truck in Boston, says the appearance on season 2 of The Great Food Truck Race in 2011 “was really great timing.”

DiSabatino says it’s up to a restaurateur to parlay that TV time into additional opportunities and really make the most of it.

Tom+Chee started serving grilled cheese sandwiches in 2009 on a $150 grill under a tent in downtown Cincinnati. Once the menu expanded and the owners added two brick and mortar stores, they received a call from Man vs. Food in 2011.

“It was our first national exposure,” says cofounder Corey Ward. “When that show hit the air the floodgates opened. It was pretty crazy; that Saturday after it aired the place was just full of people. We couldn’t keep up. It really helped get us on a lot of people’s radar.”

Tom+Chee’s celebrated grilled cheese donut—they now have nine donut sandwich options on the menu—also appeared on The Chew; and Ward and coowner Trew Quackenbush appeared on Shark Tank, where Mark Cuban and Barbara Corcoran each invested $300,000 for 15 percent of the company.

Until recently, there wasn’t much overlap in territory among grilled cheese concepts; each had a regional presence throughout the U.S. As the concepts grow, however, owners will eventually end up eyeing the same cities. Columbus will soon see its second Melt Bar & Grilled concept and third Tom+Chee location.

“Are we going to steal each others’ customers? I doubt it,” Fish says. “We’re a full-service kind of experience. Tom+Chee? They’re going for quickservice lunch.”

Tom+Chee perhaps has the loftiest growth goals and, of the ones mentioned, is the only concept looking to fuel its growth through franchising. After Shark Tank, the coowners spend much of their time pouring through applications and doing site visits, Ward says. There are nine locations open now and Ward hopes to be at 20 or 25 by the end of this year and “well over 100 by the end of next.”

“The way we’re signing our franchisees, we’re doing multiunit development,” he says. “Ideally, sooner or later our growth will speed up and our partners won’t need as much help opening the stores.”

While both are respectful, Fish and Ward each cast an evil eye toward California’s The Melt, which opened its first store in August 2011 and now has 15 stores and 4 buses.

“They’re using high-tech technology—a cross between a microwave and a convection oven,” Ward says. “You just need a griddle. They’re way overcomplicating it. They just put it in a box and press a button. All of our stores have people in there who can cook.”

The Melt does have an accelerated growth plan, but they’re primarily focused on California and have no current plans for franchising, Martin says.

“When The Melt was opening up, everyone was calling me saying get your lawyers on this,” says Fish, of Melt Bar & Grilled. “You can’t trademark the word ‘melt.’

“But all they talk about is the technology and how fast it was going to be. Never once did he discuss sourcing,” Fish continues. “I don’t know if I want a grilled cheese sandwich from a microwave; you wouldn’t put a steak in a microwave, would you?”