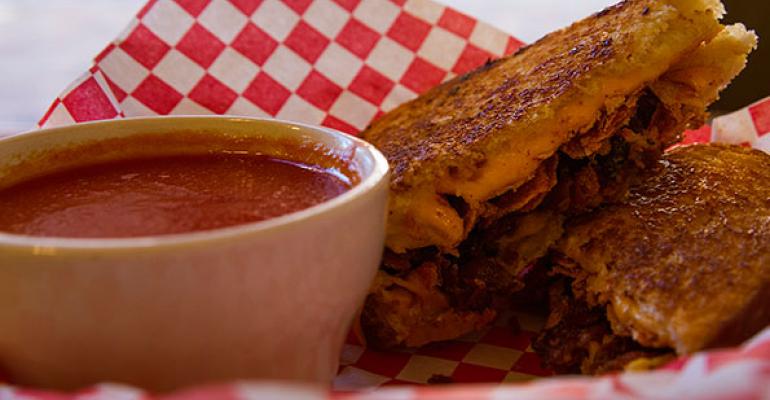 Tom+Chee
Home base: Cincinnati
Key players: Corey Ward and Trew Quackenbush, cofounders
First store: Cincinnati; 2010
Units open currently: 9
Growth plans: Tom+Chee from the beginning has seen franchising as a lucrative model. With nine locations open today, goals are 20 or 25 by the end of this year and more than 100 by the end of next. Given its backing from Shark Tank’s Mark Cuban and Barbara Corcoran, those goals aren’t unrealistic.

Back story: Over the past decade, Fountain Square in downtown Cincinnati has become a destination, hosting various entertainment and events. But until recently, the food was hit and miss.

So in 2009 Corey Ward and Trew Quackenbush emptied their bank accounts with the idea to fill that void. They set up a tent, bought a $150 grill and began serving grilled cheese sandwiches, knowing that they needed to make their money back in five days or they weren’t going to be able to pay rent.

The sandwiches took off, and they began expanding the menu. By that time, Melt Bar & Grilled was open in Cleveland and the buzz about grilled cheese was beginning to grow. Martha Stewart and Rachael Ray were cooking “grown-up” versions of the sandwich. But, for Ward and Quackenbush, that’s just the opposite of what they were aiming for.

“Everyone eats grilled cheese because they want to feel like a kid again,” Ward explains.

Less than a year after pitching the tent, Ward and Quackenbush opened a brick-and-mortar store within a seven-minute walk from Fountain Square in a less-than-appealing part of town.

“We picked the one spot downtown we could afford with a working hood system,” Ward says. “We did all the work ourselves; it was us in there with the sledgehammers. We had three employees, all friends and family.”

About three months later, Tom+Chee received an offer they couldn’t refuse: to lease a pristine 3,000-square-foot space with all the necessary restaurant equipment for $1,500 a month.

“That was just insane for us,” Ward recalls. “We did more sales in the first month than all of (the three months at the first location).”

The TV exposure boosted Tom+Chee to a new echelon, and they were able to capitalize. An appearance later on Shark Tank yielded thousands of franchise requests.

“We’ve had 18,000 franchise requests, and from places such as Portugal, Dubai, the Czech Republic and Amsterdam,” Ward says. “We had five before Shark Tank.

“It has given us the ability to be very selective,” he continues. “We’re turning down people for random reasons. We don’t feel any pressure to open super fast; we don’t have to take whoever is coming through the door.”