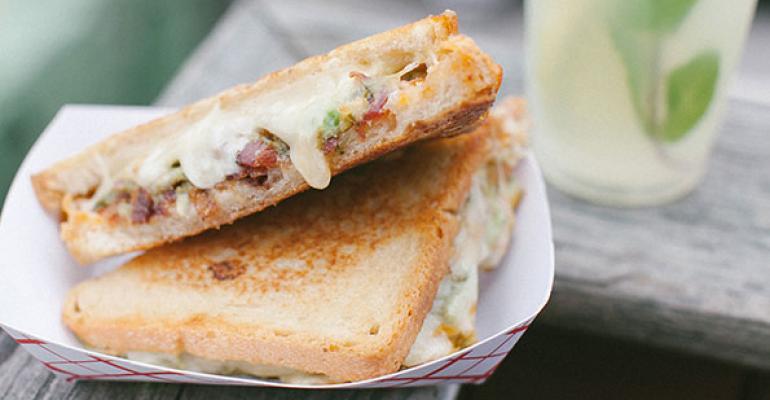 Back story: While in college, James DiSabatino was touring Europe with a punk band, and in every city the band played, they often found a nice spread of cheeses and bread awaiting. To make things interesting, DiSabatino and his bandmates would come up with creative ways to mix the two.

When he returned home to Boston in 2009, DiSabatino took the creations he had become familiar with and decided to launch a food truck. He thought it would be a fun one-off project. At the time, there were no food trucks in Boston.

“We were the first food truck on a public street in 2011,” he said. “It was just really great timing.”

DiSabatino said Roxy’s walks the line between a kids’ grilled cheese and a grown-up version of the sandwich.

“We want to make a sandwich that’s good enough that someone could say, ‘I can’t make this at home,’” he explains. “Most of our kitchen staff has fine-dining experience and grilled cheese is only part of our concept.”

“Grilled cheese is different from a burger, which has 100 different techniques,” he says. He thinks that Roxy’s may have to evolve and add different offerings to stay relevant.

DiSabatino also thinks the grilled cheese concept appears easier than it actually is.

“It depends: some concepts are easy, but ours is a little more difficult,” he says. “Our sandwiches are cooked by a person, not by a press. There’s a little bit of subjectivity; it’s up to a human to decide if it’s the right melt.

“Some concepts have the timer and the two-minute press, and those are a bit harder to adapt.”