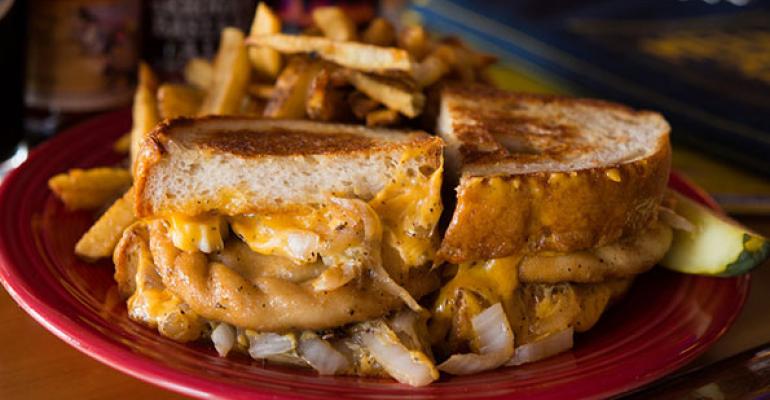 Getting cheesy with Melt Bar & Grilled

Back story: For Matt Fish, grilled cheese had always been a childhood favorite. As he grew older and worked at several fine-dining spots around Cleveland, he found himself in the kitchen after hours playing with grilled cheese variations to take home and eat before going to sleep. He came up with some crazy concoctions, and eventually other employees were asking him to make them one.

“I started to think ‘this thing has legs’ and maybe more people would want these sandwiches,’” Fish says.

So in 2005 Fish started working on a concept and the menu. At the time, he envisioned a craft beer bar—before craft beer really took off—that also served grilled cheese.

“I said whatever everyone else is doing, I don’t want to do anything like that,” Fish recalls. “So I found an old man’s bar downtown Lakewood that was for sale and I put all my life savings into it.”

“If we weren’t the first, we were definitely on the forefront,” Fish says.

Melt opened a second location in May 2010 and since then has opened a store a year. Growth came to accommodate the customers—there was often a wait of more than two hours at the original location—and also because Fish was afraid of potential competition.

“I was starting to get stressed and worried,” he says, “that if someone else decides they want to open a gourmet grilled cheese concept in Cleveland, I need to solidify Melt as the grilled cheese spot.”

Fish says what makes Melt Bar & Grilled stand out is the fact that he teaches staff to approach it as fine dining.

“In theory, the concept is very easy, but the execution is difficult,” he says. “We approach it as a fine dining restaurant that just happens to be serving grilled cheese sandwiches. The delivery is not pretentious—you can wear anything and everyone’s welcome. You can’t get what we do here in the Melt experience—the food, the service, the atmosphere—anywhere else. I want people to go to Melt and want to return but not know specifically why. Was it the food? Was it the service? I want it to all work and mesh together.”

Next: The Melt
Previous: Tom+Chee