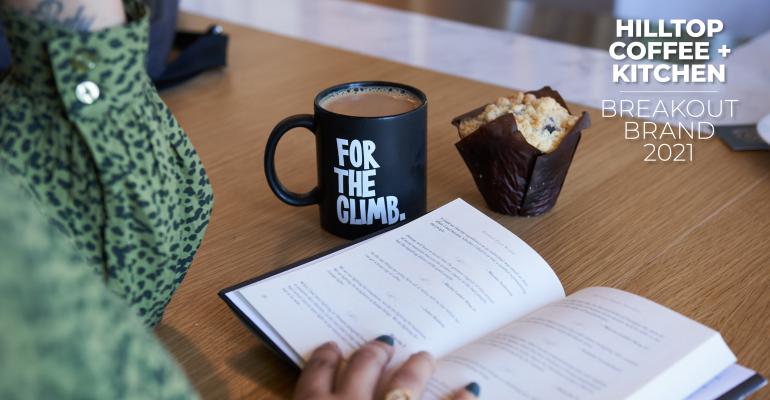 Support from the local community has carried Hilltop Coffee + Kitchen through the pandemic, and appropriately so.

The three-unit operator, based in Los Angeles, has built its business model around being an integral part of the communities it serves.

“It was amazing to have the support of all our customers,” said Yonnie Hagos, one of Hilltop’s co-founders. “All of our regulars that were coming in before were still coming in and supporting us.”

Hilltop, which Hagos founded in 2018 with his partner, Ajay Relan, is known for its relaxed, airy décor as well as its comfort-food menu of breakfast and lunch items, most priced in the $9-$15 range. Bowls include the Soul Bowl, with a poached egg, cream grits, collard greens and corn, as well as health-focused options such as the Super Food bowl, with quinoa and assorted veggies.

“We've put a lot into making sure that our food is on point and making sure that we have a great selection for guests to choose from,” said Hagos. “You can go from something like one of our salads that are very healthy, or you can go all the way to a short rib grilled cheese that's obviously not.”

Hagos said he and Relan, both from South Los Angeles, wanted to create a space similar to the independent coffee shops they frequented in northern areas of the city, which he said offer a vibe that encourages creative minds to get together and discuss ideas. The Hilltop décor features art from local artists, which, along with a high level of customer service, helps the spaces create their sense of community, Hagos said.

“Coffee's a very communal thing,” he said. “We want to make it very inclusive. We want everyone to feel very comfortable when they come in.”

Actress, writer and entrepreneur Issa Rae has also been an equity partner in Hilltop Coffee + Kitchen since 2019.

“She's been amazing to work with,” said Hagos. “The three definitely have the same vision for what we're trying to build.”

Hagos and Relan, who also own a sports bar/restaurant together in Hollywood called The Parlor, are planning to focus their near-term growth plans in the Los Angeles area, but Hagos said he sees potential for the Hilltop concept to expand nationwide.

“One of the things that we talk about is that it would be great to one day have someone create something amazing, and say that they were sitting inside a Hilltop when the idea came to them,” said Hagos.