/sites/all/themes/penton_subtheme_restaurant_hospitality/images/logos/footer.png
Recent
Recent
Grubhub launches commission-free direct ordering platform for restaurants
May 12, 2021
The Small Business Administration is awarding $2 billion to 16,000 restaurants in the first wave of Restaurant Revitalization Fund grants
May 10, 2021
Sam Oches named Editorial Director, Editor in Chief of Nation’s Restaurant News and Restaurant Hospitality
May 10, 2021
5 things: Troy Guard’s TAG in Denver and Daniel Boulud’s Café Boulud in New York City to close permanently
May 10, 2021
Flavor of the Week: The Negroni: The boozy cocktail from Italy
May 10, 2021
Featured
Alternative delivery players challenge third-party delivery stronghold
May 04, 2021
The new maximalism: Will restaurant design do a 180 into rebellious excess?
Apr 22, 2021
Pat Martin, chef and owner of Martin’s Bar-B-Que and Hugh Baby’s, discusses the business and meat supply of the coronavirus pandemic
May 05, 2021
Eleven Madison Park in New York City to reopen with meatless menu, chef and owner Daniel Humm says
May 03, 2021
Operations>Limited Service 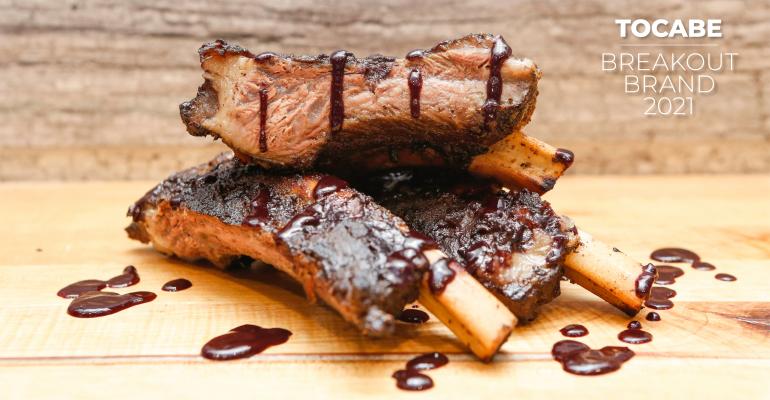 Tocabe, an American Indian Eatery, is fast-casual concept with two locations, both in Denver. Since 2008, founders Ben Jacobs and Matt Chandra have been highlighting the foods of native people by offering it to their customers in a format they know well: The customizable bowl.

Guests have a choice of wild rice, quinoa and wheatberries or a lettuce blend that they can top with native foods such as braised shredded bison or beans — or less native chicken or beef, of course – garnished with Osage hominy, seed mixes, green chiles or different salsas, along with elderberry vinaigrette if they like.

They also offer fry bread “tacos,” multicolored corn chip nachos, and other items, including their specialty of house-cured and braised bison ribs. The names of their Native suppliers are displayed prominently on the menu.

As COVID hit and traffic plunged, Jacobs, himself a member of the Osage nation, and Chandra started thinking of new ways to reach their customers, and they’re about to launch Tocabe Express, offering dry goods such as pinto beans, different types of wild rice, tepary beans and cornmeal from the suppliers they already work with, as well as Tocabe’s own products, such as bison dry rub, ground bison by the pound and wet-aged bison steaks.

They’re also offering cornmeal mush mixed with juniper ash, a native process similar to the Mexican process of adding lime to cornmeal to remove toxins and make it easier to digest.

To deliver the products, they’re piggybacking on their suppliers’ distribution network allowing their brand to literally break out from being a two-unit fast-casual concept to a national brand with national distribution that allows them to continue their original mission of shining the spotlight of native products, “which is kind of what our restaurant is all about,” Jacobs said.

As they build Tocabe Express, whose name is a play on Pony Express, they’re getting more natives involved. A fellow Osage is their web site developer, and a native artist has developed the branding material.

Meanwhile, they’ve been buying whole bison from a native rancher in Mobridge, S.D., Fred Dubray of the Cheyenne River Tribe, and soon will be having it processed by the Osage Nation’s own processing plant that was built during the pandemic to give them greater control of their own bison herd in Oklahoma.

And they’re also ready to franchise. That documentation was finished at the end of 2019, and Jacobs says that Tocabe Express will make expansion more viable.

“By building the supply chain, it also builds our own distribution channel,” he said, allowing them to supply franchisees, once they get some, more efficiently.

Jacobs said it would be great to have native franchisees — tribal casinos seem like a perfect fit, he said — but he’s looking for any experienced multi-unit operators who share Tocabe’s cultural values.

“We need people that truly believe not only in our brand, but what the vision of our brand is,” which is representing the native community in a positive manner. “You have to build in your belief system and you need franchises who are going to follow that model.”

This story has been updated to reflect the fact that Ben Jacobs is a member of the Osage nation, but Matt Chandra is not.
Start Slideshow ›
TAGS: Operations
0 comments
Hide comments
Recommended Reading