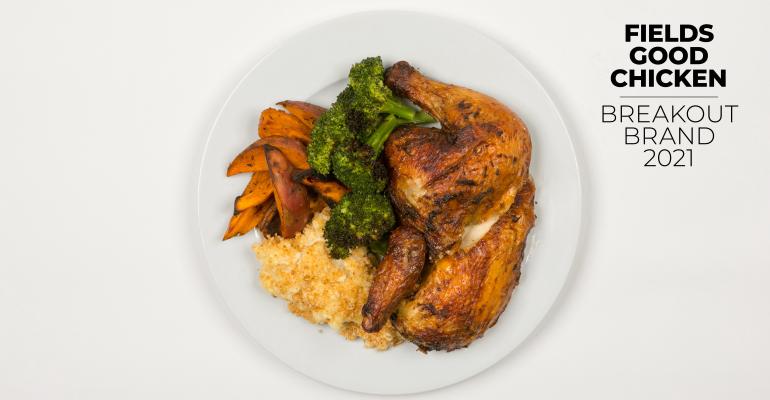 When New York City-based Fields Good Chicken founder and CEO Fields Failing opened his first location in 2014, much of the “good for you” lunch landscape in Manhattan was devoted to salads. For Failing, he wanted to introduce an option for the office lunch crowd that was just as healthy but hearty and filling too.

Now, more than six years later, the fast-casual Fields Good Chicken has six units — with room to grow — and focuses on two differentiators: their signature, humanely-raised, oven-roasted chicken and commitment to sustainability.

“Our key differentiator is responsibly sourced chicken paired with fresh vegetables,” Failing said. “That’s how I like to eat at home so that’s what we put on the menu. […] This is health food, but it’s meant to fill you up.”

While most of the Fields Good locations were originally meant to appeal to New York City commuters during the workday, that changed drastically during the pandemic.

Failing said they closed up shop in April and reopened their restaurants in June. While they were shut down, they were able to provide meals to first responders and take the time to pare down and refocus their menu as the biggest daypart shifted from workday lunches to family dinners with people working from home.

“We used the pressure of the pandemic to figure out how to run the business in a more efficient, leaner way,” Failing said. “We’ve improved our cost structure significantly in the last six months and we’re better set up to grow now.”

Fields Good Chicken opened up their sixth location in January in New York’s Flatiron District. For now, the location is delivery and takeout-only as they figure out a plan while the pandemic dies down.

Beyond opening new brick-and-mortar locations, Failing wants to expand his concept through ghost kitchens in new neighborhoods in Manhattan and other boroughs in New York City. But he also has a hunch the concept will catch on in suburbs and secondary cities, so their long-terms goal is to spread out beyond New York over the next year.

“Our food delivers really well and that’s a faster, easier path to growth,” he said.

As Fields Good Chicken grows, they also want to double down on their commitment to transparency and sustainability.

Currently they use 100% eco-friendly, recyclable or compostable packaging, and run on 100% wind power. Of course, being a New York City brand, they can’t easily stick a wind turbine on the roof, so instead they purchase renewable energy credits to offset the electrical power they use.

A zero-waste menu item is also coming soon as soon as Failing and his team finish perfecting it. Although he would not give details yet, Failing said that the food item will be aimed at reducing their food waste. They’re also looking to create a line of pre-marinated chicken for grocery stores coming to market later this year.