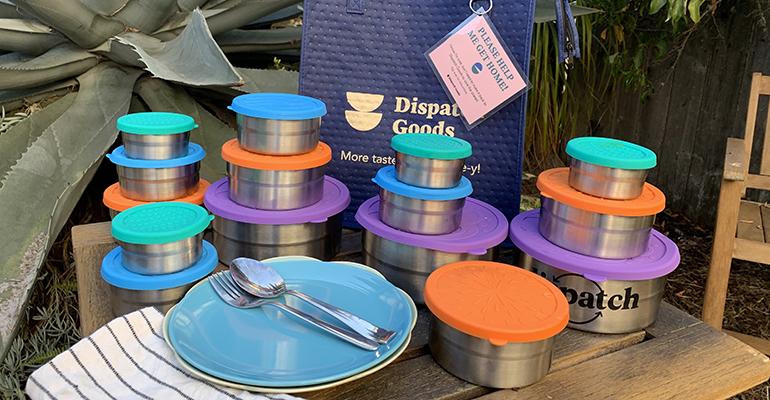 A San Francisco-based start-up is expanding a system for providing restaurants with reusable to-go containers that functions in some ways like other recycling services.
Operations>Limited Service

A San Francisco-based start-up is expanding a system for providing restaurants with reusable to-go containers that functions in some ways like other recycling services.

Dispatch Goods, which has been offering the containers through 12 San Francisco restaurants, supplies operators with a variety of stainless steel boxes and bowls (with silicone lids), mason jars and sheet pans, which the restaurants can then offer to their customers as an option when they order their food. Operators charge their customers a premium — usually $1.99 per item — in order to receive their food in reusable vessels, which Dispatch Goods then collects from the customers, sanitizes, and returns to the restaurants.

Among the operators using the service is Zuni Café, a moderately upscale eatery that described itself as the first restaurant in San Francisco to transition to 100% reusable containers. Nate Norris, chef at Zuni Café, said the restaurant has received “resoundingly positive” feedback from customers about the program — although a handful have said it is less convenient than disposable containers.

“People are really glad that we are taking this on,” he said. “Some people just love Zuni that much more because we are doing this.”

Unlike other restaurants that offer Dispatch Goods’ reusable containers as an option when they order, and then charge customers extra for the service, Zuni automatically uses the containers for all to-go items. It’s raised its prices to cover the cost, Norris said. Zuni explains the procedure for returning the containers — which can be brought back to the restaurant or collected by Dispatch Goods — in depth on its website and when customers order.

“It’s been more popular than we anticipated,” said Stoller. “It’s been really cool to see our team embrace it — it’s not a huge portion of what we do, but nonetheless rewarding for the crew.”

The containers have been popular enough, however, that the restaurant has run out of supply at times, they said. Square Pie Guys plans to offer the program as it expands to additional markets. A second Square Pie Guys is slated to open by early March in the East Bay area to serve Oakland and Berkeley, they said, and additional restaurants are planned for the coming years.

Other reusable container programs for foodservice operators have popped up around the country, including DeliverZero in New York and a vending service called Farmer’s Fridge that offers salads and other fare in reusable mason jars.

Hoell said the biggest challenge for Dispatch Goods’ business model has been the collection of the used containers from consumers’ homes for reuse.

“The missing piece, we think, for reuse is the reverse logistics,” she said.

When Dispatch Goods first launched in 2019, it was only supplying restaurants that offered lunch to the Yelp headquarters in downtown San Francisco, which made collection easy. It simply set up collection bins on each floor of the building in the trash and recycling area and returned them to the handful of restaurants in the neighborhood that were participating in the program.

The company was in the process of lining up more corporate partners for similar arrangements when the pandemic hit and office workers transitioned to working from home, forcing Dispatch Goods to pivot to a home-collection model instead.

“It's been the dream I've had since the beginning — creating an infrastructure for reuse that's similar to recycling with a home-collection component,” said Hoell. “But it was going to be a later problem and not the first problem to solve, because it's not a simple problem to solve.”

Dispatch employs driver/collectors who use their own cars, although the company has been discussing with its drivers the possibility of having them be contract drivers instead, which would give them tax-deduction advantages for their expenses, she said.

After consumers place their order, they receive a message telling them when the pickup will be in their neighborhood, and then they receive a text reminder the night before and another 10 minutes before arrival. Several consumers have set up collection bins outside their front doors where they leave the containers in order to help minimize close contact with drivers during the pandemic.

Another challenge that Dispatch Goods encountered as it transitioned to the new model was that the restaurants it was serving in residential areas demanded much more variety in the sizes and shapes of the food containers. The company had previously offered takeout lunch bowls in two sizes to the restaurants serving Yelp workers, but it has since expanded to about nine different container styles.

Restaurants select which containers they think would be the best fit for their menu, and then Dispatch Foods helps them add reusable containers into their online ordering menu as an option consumers select themselves, just like they would select “extra avocado” or other order modifications.

Currently about 10% of all orders across the 12 restaurants include the reusable container option, Hoell said.

In addition to the dozen San Francisco restaurants that have been offering the containers, Hoell said five more restaurants in the Alameda, Calif., market were slated to join the program in the coming days.

Hoell declined to provide specific sales volumes, but said last year Dispatch Foods diverted 15,000 food containers from entering the waste stream, and that that number was on an upward trajectory.

“It's been going incredibly well, in our opinion,” she said, noting that there had been a backlog of restaurants waiting for the company to bring in more inventory.

Dispatch Foods received early funding from the Sustainable Ocean Alliance, an accelerator funded by Marc and Lynne Benioff of Salesforce, and also received funding from a business accelerator at the University of California at Berkeley. In order to buy its most recent inventory shipment, the company relied on some individual angel investors, Hoell said.

The company is currently planning a larger round of seed funding for early this year as the company seeks to grow “both in the Bay Area, and outside of it,” she said.

“We have a team of people that feel like this has to exist in the world, and so we're committed to making it happen, even with the challenges of the past year,” said Hoell.