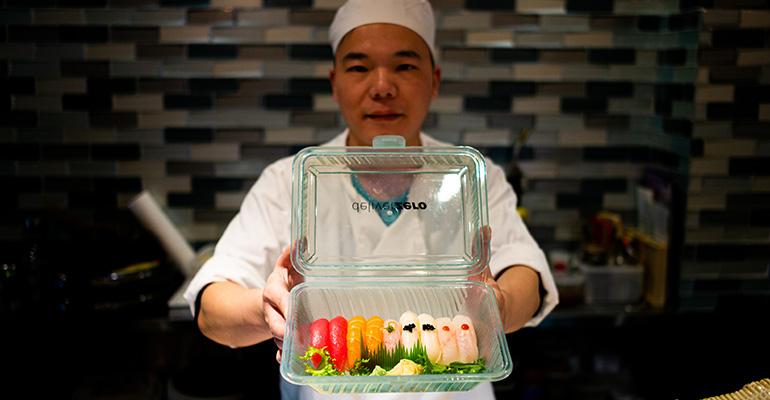 DeliverZero — which launched in Brooklyn, New York in October 2019 — is a third-party delivery service with a twist: the sustainable, waste-minimal company only delivers food in reusable packaging that customers return to DeliverZero’s network of restaurants after finishing. The New York City-based service is still much smaller than national competitors like Grubhub and Uber Eats, but has grown quickly to just under 100 restaurants in their system in Brooklyn, Queens and Manhattan with plans for more expansion soon, DeliverZero co-founder and CEO Adam Farbiarz told Restaurant Hospitality.

“We built the system to look and feel like all of those other on-demand services like Grubhub and Uber Eats,” Farbiarz said. “Everything we have done is try to give customers an experience they’re familiar with, just with this added environmental overlay.”

While DeliverZero gets ready to launch their mobile app (which is supposed to be released later in November), customers can place food orders via the DeliveryZero website. There’s no upfront fees or subscriptions — customers just pay for the price of their meals, like they would with any delivery service.

Related: Dig tests the use of reusable takeout bowls

After customers place their orders, DeliverZero lets them know how many containers they’re going to receive, and those containers are added to their account balance. Once their meal is delivered, they have six weeks to return the containers, either by placing another order and handing it off to the delivery driver, or by dropping it off at a drop-off spot.

From the restaurant end, members receive a tablet that lets them know when orders come in. It’s then up to the restaurant to determine how to package orders and how many containers to use. The tablet prompts the employee to let them know how many of which types of containers are used per order, so that DeliverZero can know where their boxes end up. 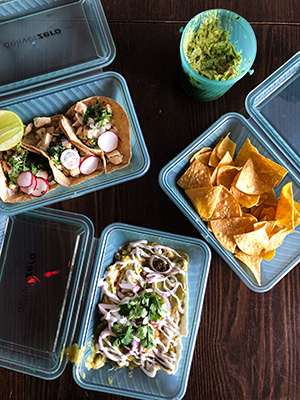 Photo: DeliverZero allows customers to order food in packaging that can be reused 1,000+ times.

Once restaurants get the containers back, they wash them (they’re durable, dishwasher safe and last at least 1,000 uses, Farbiarz says) and store them: “they’re lightweight, stackable, and don’t take up much room, he adds.
Although Farbiarz would not disclose the details of their commission rates, he said that they’re based on a percentage of food sales and that he likes to work with restaurants to keep costs low and lower than the rates of their national competitors.

Besides standing out from larger third-party delivery competitors, Farbiarz said that they are different from other sustainable food delivery packaging companies because they are not a subscription service.

“There is no subscription no upfront fee; you’re just charged for the price of the container [$3.25] if you don’t return containers in six weeks,” he said. “The driving motivation behind our business is to meet customers where they are: there are no deposits or fees that could create friction, and it’s easy for the restaurant too.”

Farbiarz said that even though the cost of supplies, at $3.25 each, their profitability model is hinged on the fact that the containers will last a long time. The non-clamshell containers could technically last forever.

Although the company was launched just before COVID-19 and experienced much of their growth during the pandemic, Farbiarz said that their business operations has not really been impacted by it, other than many customers choosing to receive and drop off their containers in a contactless fashion.  But surprisingly, he does think the pandemic — with the rise in meal and grocery deliveries — has made people attuned to how much garbage they accumulate with takeout and delivery.

“I think people have become so sensitive to it now because you see all the waste piling up,” he said. “When you go out to eat, reusing a fork and plate is obvious because we don’t want to be wasteful. We take that productive and sustainable approach to takeout.”

In the coming year Farbiarz wants to focus on expanding DeliverZero’s reach throughout New York City. He also has a deal in place with a partner who will take the concept abroad to Amsterdam. Within the next five years, they hope to bring DeliverZero to major U.S. cities, including Los Angeles, Chicago and San Francisco.