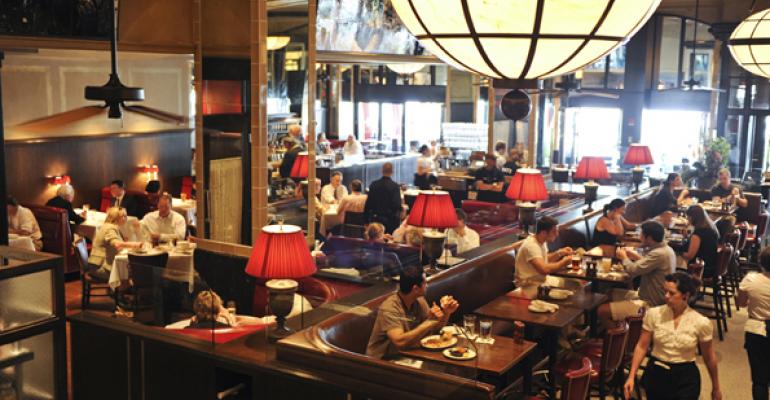 <p> The staff of Eastern Standard in action</p>
Archive

Garrett Harker has a staff at Eastern Standard Kitchen & Drinks that’s not afraid to ask questions and is even happier going the distance to answer them. That culture of learning is what he credits for the Boston restaurant being named a James Beard Foundation semifinalist for outstanding service this year, as well as his successful business that has expanded with two and soon to be three other concepts.

“We’re a pretty raucous brasserie,” he says of the eight-year old restaurant in Boston’s Kenmore Square neighborhood. “You can have a grilled cheese and beer here. We don’t have the trappings of fine dining; we’re more high energy. Making that list is a really great indication of our service, and more about our spirit and connecting to guests.”

How did the 200-seat bar and restaurant that’s open from 7 a.m. to 2 a.m. blocks from both Fenway Park and Boston University get to that point? Or better yet, how could any restaurant do the same?

“Valuing product knowledge is the first place I’d start,” answers Harker, who began at that point eight years ago. “If you’re sitting through lineup, day after day, and go two or three days without learning anything? Wow. There has to be a sense of curiosity and wonder.”

Early on, he challenged his management team to participate, teach and hold learning in high regard. Lessons began with grapes in Sancerre and where chanterelles came from and extended to history lessons on Kenmore Square, the origins of fine dining and to the great restaurants in Barcelona, he says.

“Anyone who’s sat through restaurant lineups knows the moment when a server raises a hand and asks what the difference is between Swiss chard and collards,” Harker says. “Usually the sous chef will bullshit some answer, but here we say, ‘I don’t know. I’ll get back to you.’ “And someone comes back the next day with the answer.”

Harker’s education programs go beyond the typical memorization of specials and lessons on proper wine pouring, and extend to culture, politics, sports and more. There’s a monthly dining-themed book club (with book reports!), that he proudly notes was and still is staff generated, done outside of work. Wine tastings and work-sponsored field trips and presentations from Harker and noted Boston University professors are part of the curriculum as well.

“You have to start by valuing education, and that evolves into valuing teaching,” says Harker, who adds that it won’t happen overnight. Eastern Standard benefits from a location that draws a diverse crowd, with its proximity to BU, as well as attracting employees who are recent students and not far removed from academic life.

Advent of an idea

A year-end month-long research project exemplifies how much the Eastern Standard staff has embraced the culture.

Borrowing an idea from his kids’ Advent calendar, Harker several years ago split the staff into teams who profiled the 20 regions of Italy on the 20 weekdays leading up to Christmas. The next year the Eastern Standard Advent calendar featured Maine, and some employees drove 150 miles to research craft beer there. Last year’s calendar featured the 14 counties of Massachusetts, sending some staffers to Nantucket to research whaling, while others visited Berkshire County to study wines.

“It has become competitive,” says Harker. The lessons on Italy, Maine and the local community have obvious relevance, but how do lessons and discussions on politics, current events and sports affect guest service?

“Let’s say we’re going into a series with Seattle,” says Harker, noting Fenway Park is around the corner. “They might learn about Seattle, how it was founded, things that shaped the city and products from there. They come out of lineup and have a table of four with Mariners hats. Is that server going to feel more motivated to share? That table is going to leave saying, ‘Wow, something is a little different here. The server just dropped some Puget Sound knowledge.’

“All of that is confidence. A confident server is a server who gets involved when they see that opening.”

The end result for Harker, beyond the Beard nod, has been eight years of success, including new concepts Island Creek Oyster Bar, The Hawthorne (an acclaimed bar) and the soon-to-be Row 34 (a more casual oyster bar), and employees who have been far less likely to leave. His top management team has been intact for five years, which helps with continuity and encourages others to stay, too.

“The number one reason we try to dig deep into culture is guest impact, but employee retention is right behind that,” he says.