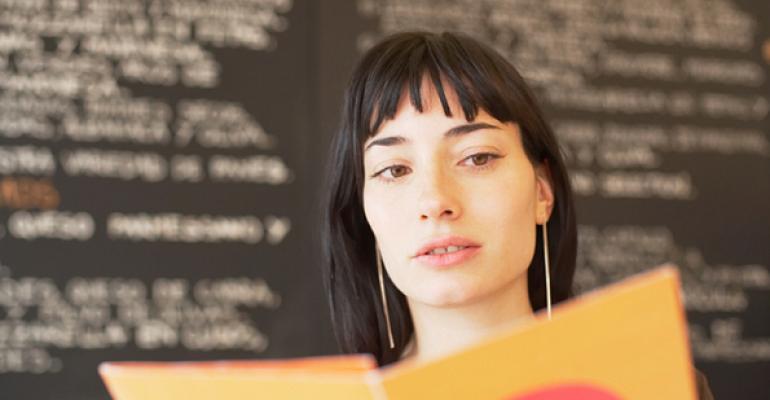 Why are you confusing customers

A good menu shouldn’t need much if any explanation. It should be laid out clearly, with brief explanations of menu items and prices plainly marked. From a basic standpoint, it’s not even about the science of menu design or menu engineering, but rather creating a menu that is readable. No menu should be confusing or inscrutable.

Recently, at a new taqueria, a group of us were escorted to our patio table by a hostess who explained that because it was “Taco Tuesday,” margaritas were $5 all day long and the three-bite tacos were only $2 each. On the table we found a stack of paper menus that customers use to check off the type of tortilla they want, the fillings, sauces, cheese, etc. Also on the table was a small taco menu. “Don’t worry about the big menu,” the hostess said, “just use the small menu.”

Our waiter arrived and heard the hostess recommending we use the small menu. Then the two argued about which menu we should use. When the hostess left, our server said, “Don’t listen to her. Use the big menu and check off what you want.” So we looked at the menu our server suggested and found no explanations of menu items. Some were not self-explanatory. What is chicken tinga? How about crispy shrimp?

Thankfully, nobody at our table had food allergies. But what about customers who do? Without menu explanations, one is not sure if a menu item contains a life-threatening ingredient. You know who else wasn’t sure? Our server, who had to go back to the kitchen to determine what was in several tacos we have questions about.

Here was another problem. Menu items had a number next to them. For the tacos section, it simply states “3 each.” If you ordered a type of taco, would you get three of them, or was each taco $3? As it turned out, 3 was the price of a taco, though on this day, Taco Tuesday, they were only $2. This point may have been why our hostess was directed us to the smaller Taco Tuesday menu. Confusing for customers and, apparently, the staff.

By the way, the restaurant has a policy of serving everything family-style. We were okay with that until we saw this very long, narrow platter stuffed with 30 soft tacos in two long lines and pressed against each other. There was no separation between the vegetarian tacos and the meat tacos, which was an issue with the vegetarians at the table. Also, it was difficult to determine where one type of taco left off and another started. Grabbing tacos was a messy affair.

Surprisingly, this restaurant is a new concept from a veteran restaurant group that has other terrific brands. How it could create a concept where the staff is not trained, its menus are nonsensical and its service style is a mess is confounding.

Here’s something to think about: Is your restaurant providing a level of service that is seamless and carefree for customers? If what you’re doing is confusing, complicated or unnecessary, rethink your process.