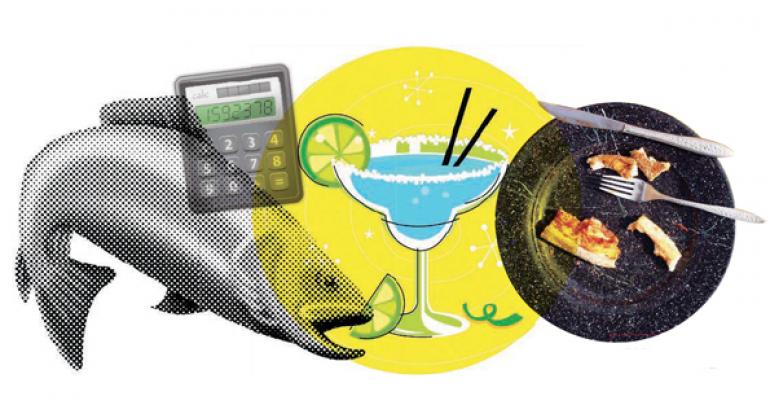 7 steps to a better menu

Menu engineering is as much a science as an art. The ultimate goal? Getting the biggest bang for the buck. RELATED: How to lower your food purchasing costs

Delicious food, great service and a comfortable, clean interior all loom large in a restaurant’s chances of success, but often that formula leaves out one essential ingredient: the right menu balance. Engineering a profitable menu can be a painful and complicated process, but in the end, this kind of discipline can pay off.

Maybe you’ve analyzed all your recipes and know your food costs to a decimal point. But did you consider the labor to prep them, or the equipment? Are your cooks wasting food unnecessarily? Do some stations get overrun during busy periods, preventing orders from being completed quickly? Menu engineering takes into account these issues and others. Here’s what the process involves.

This is arguably the key ingredient in any attempt to engineer a menu, yet Palm Springs, CA-based consultant Gregg Rapp estimates that 80 percent of restaurant owners don’t bother with this piece of the puzzle. “It’s time-intensive, and they have so many other things to do, so this ends up being the most procrastinated job in the restaurant,” he says.

Many owners know their food cost percentages but overlook the fact that food doesn’t prepare itself. Consultant Mark Kelnhofer of Columbus-based Return on Ingredients advises clients to first document each recipe, then figure out a standard prep time, to calculate the real cost. Knowing the labor cost can also help in decisions about when to buy already-prepped foods. Sometimes, factoring in labor costs uncovers an awful truth: A dish actually loses money based on its price.

Kelnhofer says operators should aim to replace any current underperforming menu item with something that will improve the gross margin per plate. “I look at total profitability,” he explains. “It’s about the cash in the bank, not percentages.”

2. Consider that less may be more.

For a variety of reasons, briefer menus make a lot of sense. “When you have a big menu, it creates a wide range of challenges,” says Dean Small, founder of Synergy Restaurant Consultants. The main issues are the difficulty of training for and executing all those choices well. He suggests simplifying the selections and instead offering a handful of seasonal specials that will keep the menu fresh without bogging down operations.

And really, unless you’re The Cheesecake Factory or Yard House, the days of hulking menus, meant to appeal to a mass audience, seem to be numbered. “In today’s world, people trust restaurants to be good at what they do, not at everything. Menu specialization has become a bigger tool than menu generalization,” says Steven Goldstein, a principal with The Culinary Edge in San Francisco.

Rapp says many of the major chains are trimming their menus. His advice? “Limit each category to five to seven items. If you have more than seven, people will default to familiar fallbacks, put down the menu and order something that’s typically less profitable”—a simple cheeseburger and a beer, for example.

He recommends breaking the menu into categories like beef, chicken, seafood, pork, sandwiches—and making it more user-friendly. Why? “The easier we make it to navigate, the more people will order, so you will see the average check increase.” Dairy Queen, for instance, once offered a lengthy list of Blizzard mix-ins, but now the menu is divided into types—Cookie Lovers, Candy Cravers, Fruit Fans and Chocoholics—to facilitate ordering. A brewpub that serves dozens of beers might do well to categorize them and use that as an opportunity to educate guests about the differences among the various styles of beer.

3. Look at the big picture.

“The worst mistake people make is cooking what they love and not thinking about the waste,” says Arlene Spiegel, a foodservice consultant based in New York City. She advises assigning menu components to one of three buckets: one-third signature items (dishes that define the restaurant and aren’t available everywhere); one-third familiar, accessible choices that will satisfy the most finicky eaters; and the remaining one-third items created from by-products of the first two groups.

“That way, nothing gets thrown in the garbage, nothing goes to waste and your chances of achieving margins and profit are much higher,” Spiegel explains. By “nothing,” of course, Spiegel means “less,” but if you or your staff really need a wake-up call she is a big fan of examining trash, not only what’s left on customers’ plates at the end of the meal but all the food thrown away during prep. She has clients collect all waste food products into buckets or clear liners, then weighs them at the end of a shift. “Sometimes there is 18 to 20 pounds of food that you have paid for that’s going into the garbage. Before you’ve started you’re already behind the eight ball,” she observes.

Ingredients aren’t the only things to analyze in determining the ideal menu mix. The kitchen gear and capacity and the menu need to balance out, or you can wind up with one or two overused pieces that create a back-of-the-house bottleneck. If half the menu features deep-fried foods, for example, that fryer is going to see a lot of action. Ideally, each station should be in demand for roughly equal time during service.

Village Tavern, a 12-unit group based in Winston-Salem, NC, pared down its extensive menu to reduce turnaround time. The restaurants now rotate a list of specials.

Village Tavern also considered equipment utilization in tweaking its menu. Did it make sense to install a pricey new pizza oven? “We had them look at whether they could drive enough pizza orders to the point where a pizza oven was worth the investment,” says Michael Lukianoff, a Results Thru Strategy partner who worked with the chain.

5. Ditch the dogs, boost the stars.

It’s common wisdom that low-volume, low-profitability choices have no business on a menu. The opposite category—high-volume, high-profit items—should be celebrated and, if possible, expanded on. If you sell a lot of crab cakes, think about new ways to present crab cakes—ethnic flavor variations, for instance.

Even better are superstars. “A superstar is a margarita in a Mexican restaurant,” Rapp says. Many guests can be counted on to order one, and the profit margin is attractive.
An often-repeated adage, “your menu is real estate,” can involve some tough decisions, getting rid of a dish that a few customers or a chef loves but that doesn’t yield enough volume and/or profit. But freeing up those spaces can present an opportunity, too.

“If you knock off items that are not performing, it gives you a chance to be creative and test new things out,” says Spiegel. “If it’s a chef-centric restaurant, no chef wants to be a one-note cook, they want to be known for innovation. And it will keep your staff engaged if they have an opportunity to come up with new ideas.”

6. A taste of luxury goes a long way.

One way to boost the profitability of a dish is to pair inexpensive ingredients with something more exotic, then push the price point. “Take an item like shrimp and scallops with a saffron cream sauce,” Small says. “You don’t have to use jumbo shrimp or the biggest scallops. You’re getting the halo effect of the saffron, since saffron is perceived as being expensive.”

“Menu engineering has been around so long that a lot of people are looking only at profits and building check averages,” Lukianoff says. “You have to be careful about what you’re driving demand to, because you may be bogging down the kitchen or changing the experience.”

The experience, or what your brand represents, is something to remember when designing or revamping a menu. The overall menu strategy—the result of factoring in the target guests, their needs, on what occasions they’ll be visiting the restaurant and the facilities/service style—reflects the brand, says Culinary Edge’s Goldstein. Ultimately, that strategy “should be the principle guiding decisions about what should and shouldn’t be on the menu.”

In the end, engineering a better menu can be a demanding job. “But it’s one of the best ways to keep focused on your business,” Spiegel says. “After all, if you’re not making money, what good is creativity?”