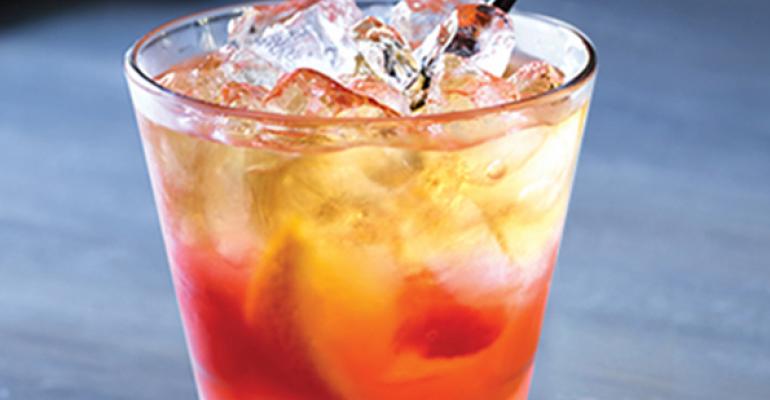 Applebee’s cocktail lineup now embraces brown spirits, including a no-frills Old Fashioned and a simple Whiskey Smash. Made by muddling lemon and mint and finished with Jim Beam bourbon, then poured over shaved ice, the Whiskey Smash has become a trendy drink at many mixologist-driven bars this summer. To play it safe, the chain also features a Fireball Whiskey Lemonade, made with Tito’s Handmade Vodka, strawberry, lemonade and Fireball Whiskey. It makes whiskey accessible to those looking for something sweet to sip instead of a stiff drink.

TGI Friday’s debuted a whiskey-based smash drink earlier this year, known as the Peach Honey Smash. “When I asked Matt Durbin, the Friday’s executive responsible for ‘beverage and bar innovation,’ how the Peach Honey Smash came to be, he nodded at research suggesting the popularity of brown spirits among millennials and women, and he described the smash’s appeal in DeGroffian terms—’an approachable way to enter the whiskey category,’” Slate’s Troy Patterson reports.

Crowdsourced funding not quite right for your business? Restaurant owners could gain greater access to another alternative financing source if Lending Club’s IPO is a success.

Although they facilitated more than $2 billion in loans last year, companies like Lending Club, Prosper and other peer-to-peer outfits aren’t lenders per se, as banks are. They’re marketplaces, providing a platform that facilitates loans between private investors and potential borrowers. Other successful peer-to-peer marketplace companies include Uber and Airbnb, which is why some analysts say the Lending Club IPO could be one of the biggest ever.

The lone drawback to this segment’s growth right now: a shortage of viable businesses and individuals seeking loans. That’s why Lending Club and Prosper are looking to attract more borrowers—and why restaurant operators may wish to investigate whether a peer-to-peer loan might make sense for their business.

Denny’s is pouring champagne to generate a buzz for its first NYC unit; other restaurants are finding that bubbly pairs well with everyday fare.

Denny's has 1,600 units around the country, but customers who want to sample its $300 brunch for two will have to travel to lower Manhattan to try it out. That's where the chain's Grand Cru Slam champagne brunch includes a bottle of pricey Dom Perignon. About 200 Denny’s units serve alcohol; the New York City location has a full bar, complete with prosecco on tap, all the better to attract what the chain hopes will be a Wall Street-heavy crowd.

A look inside Denny's NYC restaurant >>

A handful of other operators also hope to prove that champagne is more down-home food-friendly than you might think. Bubbledogs in London offers a long list of prestigious champagnes to accompany its hot-dog-only menu. The about-to-open Birds and Bubbles in New York City pairs the bubbly with fried chicken.

Cool it with the quinoa if you want to sell more good-for-you items at your restaurant.

New data from foodservice research firm Mintel shows that 38 percent of adults are more likely to order a healthy item if it’s described on a menu as appealing, rather than merely healthful. Also, 27 percent say they prefer to order healthy meals that are made using familiar ingredients, rather than experiment with unknown tastes and flavors.

“For consumers who are often on the fence for healthy and indulgent eating, familiarity can help ease the move into healthier choices, rather than alienating them with superfoods they have not heard of or that have a reputation for lackluster taste,” says Mintel foodservice analyst Katrina Fajardo.

New Jersey wants to increase the number of liquor licenses, which could hurt current license holders.

Commercial real estate developers and economic development officials are behind a push to increase the number of liquor licenses available in New Jersey. They argue that enhanced access to liquor licenses has already proven to be a key driver of growth in other parts of the country.

This move would be good news for businesses that don’t have a liquor license now but would like to acquire one. But adding new licenses to the market would decrease the value of those already in existence.

A few restaurants and bars in northern New Jersey have paid as much as $2 million for their current licenses. Most licenses cost less, but still represent a huge investment.

Politicians are struggling to come up with a formula that would provide just compensation for current liquor license holders if the proposed changes go through.