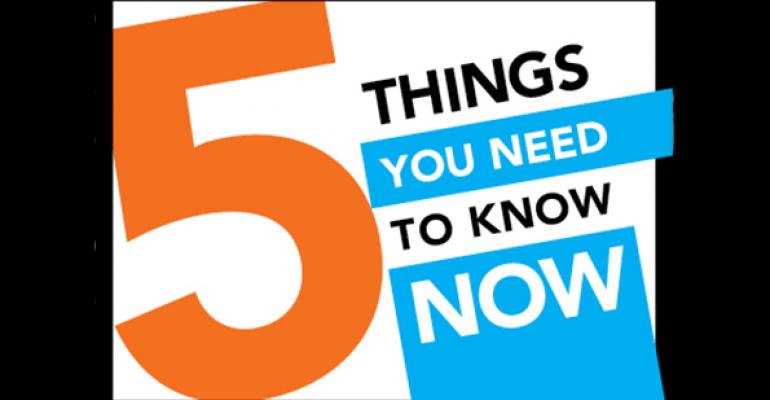 What restaurants need to know about new maple-syrup grading system

Chefs, pastry chefs, mixologists, be aware of big changes on the horizon for one of most flavorful—and expensive—ingredients you use: maple syrup.

On Jan. 1, 2015, the International Maple Syrup Institute will introduce a new grading system that replaces the current Grade A/Grade B method (the much lighter and delicate Grade A is great for cocktails; darker and more flavorful Grade B is preferred for many other cooking and dessert-making uses). Now there will be four grades: Golden, Amber, Dark and Very Dark.

On the supply front, the future for maple syrup looks blindingly bright. Scientists at the University of Vermont’s Proctor Maple Research Center have developed a method that can produce syrup from saplings instead of fully mature trees. Yields from densely planted saplings can reach 300 gallons per acre; mature trees yield just 40 gallons per acre. Saplings start producing syrup seven years after they are planted, trees require 40 years to do the same.

There’s still plenty of memorabilia to look at and hip tunes to listen to for adults who visit a Hard Rock Cafe. But features with kid appeal have been in short supply—until now.

Growth has been tough to come by in the casual dining segment of late, and 144-unit Hard Rock thinks appealing to families is one way to find it. Meet the Hard Rock Roxtars, a band of five musical characters designed to “allow the brand to connect with future and veteran rockers alike.”

Among the amenities: Hard Rock Roxstars activity books, guitar-shaped plates and photo ops with the Roxstars characters. A special Hard Rock Roxtars menu has been vetted by the National Restaurant Association’s Kids LiveWell program to ensure plenty of healthy options. Among the entrees: a “Not-so-diddley” chicken breast and “Twisted ‘n Tasty Cavatappi.”

After analyzing data describing burritos from 67,000-plus restaurants and paying visits to all 64 finalists, data whiz Nate Silver’s FiveThirtyEight has come up with a winner for its America’s Best Burrito contest: San Francisco’s La Taqueria.

In the end, technique mattered most. “This burrito’s construction sets it apart,” wrote chief field tester Anna Maria Barry-Jester of La Taqueria’s entry. “Like many Mission Street burritos, it’s prepared assembly line-style; the sour cream is added liberally from a squirt bottle, guacamole comes by the spoonful from an enormous metal bowl, pico de gallo and all its juices are added at the end. But unlike at other taquerias, each ingredient keeps its juices, making this burrito saucy in form and personality (the absence of rice also makes it noteworthy among its neighbors).” Another key: La Taqueria serves this burrito dorado-style, i.e., grilled.

The judging process also produced valuable information about how other restaurants can improve the burritos they serve.

If your restaurant sells burritos, it’s worth your time to read the full blow-by-blow report of the final judging, which comes complete with cross-section views of a burrito from each of the 64 finalists plus videos of how the very best ones are made. Here's La Taqueria's:

It’s enlightening research that would otherwise be prohibitively difficult to conduct on your own.

Customers who go out for dinner or pay late-night visits to restaurants have a wide array of demands, but rock-bottom pricing isn’t one of them. A new study finds that in the dinner daypart, value trumps cost.

Eighty-three percent of participants in a new Technomic study said that when choosing a restaurant for dinner, good overall value is important, but just 63 percent said low prices were key.

These numbers turned up in Technomic’s just-released Canadian Dinner & Late-Night Consumer Report. Other top-line findings are:

• Roughly one-quarter of consumers go to restaurants for special-occasion dinners (23 percent), happy hour (28 percent) or just drinks (27 percent) at least once a month.

• 53 percent of consumers specify healthy options as important when picking a dinner restaurant, but just 30 percent say the same about choosing a late-night spot.

• 57 percent of consumers order appetizers at least some of the time for dinner; while 45 percent will choose appetizers and snacks for late-night dining.

Technomic’s Darren Tristano says these findings tell a positive story for restaurant operators who are looking to do more evening business. “Consumers say the sheer enjoyment of dining out is vital for dinner and late-night occasions," he explains. "Key attributes like attentive service, an appealing ambiance, and a craveable mix of menu offerings can combine to create experiences that attract evening traffic and give operators more opportunities to capitalize on dinner and late-night visits."

Want to increase customer perceptions about the quality of your restaurant’s sandwich offerings? Think about upgrading the bread first.

That’s one of the important insights turned up by Datassential’s MenuTrends Keynote Sandwich report. The company asked more than 1,000 consumers what makes a truly great sandwich. At 42 percent, the top-scoring component was the carrier, i.e., bread. Thirty-eight percent tabbed a sandwich’s meat or other protein ingredient as most important, with turkey, ham and chicken receiving the most mentions.

“Today’s consumers are encountering a wider variety of sandwich options and flavors, from regional and ethnic influences to healthier ingredients and quality-driven descriptors like ‘slow-cooked’ and ‘hand-carved,’” says Datassential’s Brian Darr. “The popularity of sandwiches allows restaurants and retailers a broad platform on which to develop new appealing varieties along with tried-and-true favorites.”