Viridian, a dreamy neon wonderland of a cocktail bar, opened in Oakland this month 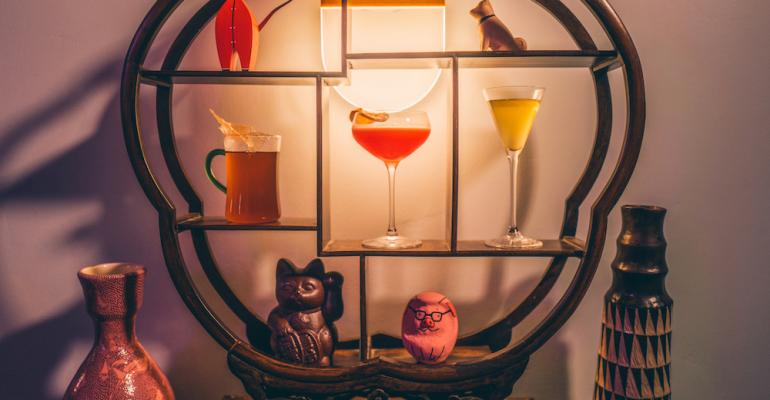 Uptown Oakland’s Viridian, which opened last week, is a craft cocktail bar from William Tsui, Raymond Gee, Jeremy Chiu and Alison Kwan. The space has been designed to impart fluid and airy vibes as a backdrop for farm-to-glass cocktails and dim sum-style treats and high-level composed desserts.

The design team behind the look and feel of 70-seat Viridian is Soon and Soon Studio, led by Anna Lee and Brandon Jew — the latter a restaurateur and chef in his own right, known for the Michelin-starred Mister Jiu’s in San Francisco and Moongate Lounge.

Related: Restaurants have an appetite for art

Lee and Jew found their inspiration from the colorful side of 1990s, including the 1994 Hong Kong film “Chunking Express,” ‘90s album covers and neon landscapes a recent trip to Hong Kong.

The overall approach to design was to create an environment for imbibing that’s infused with verve and joy. Black and yellow tile from Heath Ceramics and lighting underneath the glossy black bar gets optic nerves pumping in preparation for sips and snacks.

Neon sculptures were created by San Francisco-based artist Laura Stevenson of Rite Guy Design, evoking “what the view might look like from high up in a Hong Kong tower building, overlooking the tremendously influential neon landscape of one of the world’s greatest cities,” the owners said in a release.

Viridian’s executive chef, Amanda Hoang, was most recently at 20th Century Café in San Francisco and prior to that was the pastry chef at Bird Dog in Palo Alto, Calif., where she had full creative control of the seasonal dessert menus. Her inspiration comes from her roots: Hoang’s grandmother baked for American troops during the Vietnam War, soothing homesick soldiers with brownies, donuts and pineapple upside down cake.

Her family’s immigrant experience — parents hailing from Vietnam and Taiwan but ethnically Chinese — has informed her kitchen focus. Hoang has a special way with incorporating many different, sometimes surprising, textures into desserts, and with using tea — steeping ingredients or turning it into a powder.

At Viridian, Hoang will be offering her take on desserts with items such as Thai tea tiramisu, blood orange and vanilla bean semifreddo, Rum Po-Tat (a twist on an egg tart) and crullers with a tequila-lilikoi dipping sauce. Other cool mash-ups on the dim sum/small plates menu include salt-and-pepper chicken nuggets, chili-garlic milk bread and char siu bao buns.

That phrase means Japanese hospitality, and while working at Hotel Nikko, bar director and co-owner of Viridian Will Tsui, had suburashi omoede instilled in his style forever.

An Oakland native who grew up in a Chinese immigrant household, Tsui has led bar programs at Hotel Nikko, Jasper’s Corner, Rich Table, Coin-Op and Lazy Bear, plus informal pop-ups known as Tiger and Crane, in which Tsui used Oakland Chinatown produce to its fullest boozy potential.

Local produce is a running theme in Tsui’s drinks, and foraged botanicals lean into the allure of just how wild a place the Bay Area can be.

Here’s a look at the new Viridian.

CORRECTION: This story has been updated to indicate Viridian is now open.