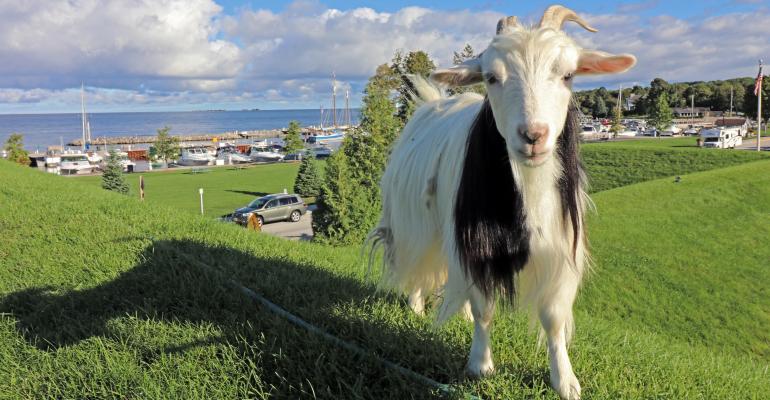 As restaurant roofing goes, Al Johnson’s Swedish Restaurant in Sister Bay, Wis., just may be the Greatest of All Time, or GOAT, for its sod covering and ruminant manicurists. And it has gotten GOATier.

Over the past three years, with the addition of a walk-up kitchen, outdoor seating, an open-air bar and a stand-alone boutique, Al Johnson’s Swedish Restaurant has entrenched itself more firmly as one of the top attractions in Wisconsin’s tourist-oriented Door County.

“All the changes and growth that were made were very calculated to what the restaurant is about and also seemed like a natural progression,” said Kit Bütz, Al Johnson’s sales and marketing manager.

Al Johnson, who died in 2010, opened the original restaurant 72 years ago, converting a hometown IGA grocery. The Norway-log remodel came in 1973, when the sod roof was installed.

The first roof-grooming goat was added initially as a joke by one of Al Johnson’s friends, but the goats have become a tradition. The restaurant, now run by Al Johnson’s children, has trademarked “Goats on the Roof” and the herd can be seen on the restaurant’s “Goat Cam.”

More recently, especially during the COVID-19 pandemic, recent changes at the restaurant have seemed prescient.

The Stabbur Beer Garden, with outdoor seating to enjoy Door County’s pleasant summer temperatures, opened in June 2016. The walk-up kitchen, or Kök (pronounced “shook,” which is Swedish for kitchen) was added in 2018.

“The outside kitchen is open from late May through Mid-October with hours varying during that period,” Bütz said.

Merchandising has also grown into part of the Al Johnson’s enterprise.

The new retail boutique, or Butik, opened in late 2020 and hosted a Scandinavian Christmas Market over three weekends late last year. The Butik was originally opened as part of the restaurant, providing waiting guests a diversion, but the new stand-alone building is near the Stabbur bar.

“It is very easy to become complacent in what is already successful,” said Bütz, “but that same entrepreneurship spirit that started the business needs to be passed onto future generations to provide the passion and lifeblood that customers see and are attracted to and want to support.”

The main restaurant seats 150 customers, who come for the lingonberry Swedish pancakes and Swedish meatballs. The outdoor spaces had added seating for as many as 275.

“We were very fortunate,” Bütz said, “because pre-pandemic we were working on expanding the beer garden grounds and adding synthetic turf.

“We also had plans for a large landscaping upgrade to our outside area.  We had all our supplies in place long before that [the pandemic] became an issue, and that included seating,” he said.

During the depth of the pandemic in 2020, which coincided with the height of the summer tourism season, Bütz said the restaurant was about to increase seating outside while reducing inside occupancy by about 50% to accommodate social distancing.

“Customers also responded well to the outdoor environment, which was much more attune with our natural surroundings, instead of some tent in a parking lot which I saw in some cities,” he explained. “The spacing outside made our customers feel secure and less anxious about the dining experience.

“The Stabbur Beer Garden walkup kitchen also provided a way for minimal contact because it was just order and pickup by the customers that were all spaced out without any servers involved,” he said.

The Stabbur bar provides an outdoor space for families to enjoy lawn games while the over-21 crowd can socialize at a long wooden bar and pergola-covered tables with drinks like aquavit shots, beer and cocktails.