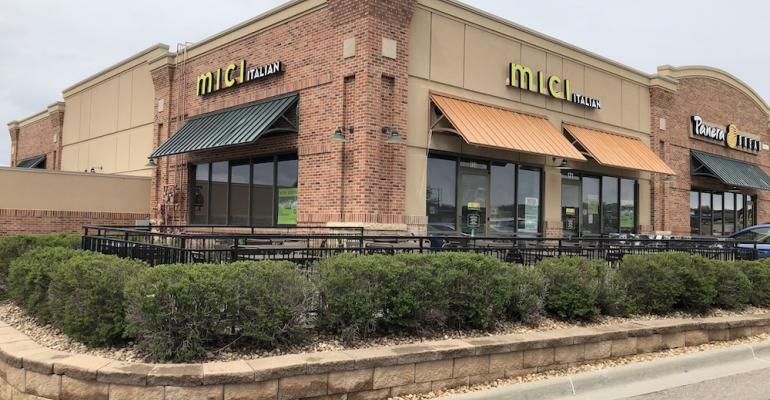 Mici Handcrafted Italian, a 6-unit fast-casual chain based in Denver, has signed its first franchise deal, which also marks its first move outside of Colorado, and has hired a new executive to oversee the chain’s expansion.

Matt Stanton is leaving his position as chief development officer of WellBiz Brands, a franchisor of health and well-being concepts, to join Mici as its chief growth officer, starting in October.

Stanton previously held franchise development positions at Taco Bueno and Smashburger. At Smashburger he worked with Elliot Schiffer, who has been Mici’s CEO since 2017.

The 30-unit deal in Phoenix is with Lucas Farnham and Dave Doty.

Farnham, who operates Black Bear Diner and Smashburger franchises in Colorado Springs, Colo., is moving to the Phoenix suburb of Scottsdale, Ariz., to focus on Mici.

Doty, who joined the Mici board of directors when Schiffer became CEO, is also a former Black Bear and Smashburger franchisee and was CEO of Jerry’s Restaurants, a family-dining concept.

“Lucas is really our boots-on-the-ground-guy,” Stanton said. “You couldn't ask for a better operator, and that's key in our franchising strategy: Not to make compromises that way. He’s ambitious, he's got a great team, and he's just a great guy, too.”

Mici is a 17-year-old concept founded by siblings Jeff, Kim and Michael Micelli, offering pizza and Italian food based on their father Jerry’s family recipes.

“We spent a long time just getting this brand ready to grow and we really felt somewhere right before COVID that it was ready to go outside of Colorado,” Schiffer said. “It's been a trying year and a half, but we've been planning to get Matt [Stanton] on board so that we can really start kicking off franchising and growing that piece of the business.”

Stanton said the Phoenix group already has two pieces of real estate under negotiation and are “very active in the site development. Their goal is not just to dip their toe in, build one [restaurant] and then dip their toe in again and build a second one. They're committed to the market.”

He said he expected a handful of leases to be signed by the time the first location opens.

Stanton said another deal had been signed to open Mici franchises in a third state, but wasn’t ready to announce where yet.

In the meantime, Mici has plans for more Colorado locations, including their first deliver-and-takeout only location, slated to open in Colorado Springs by the end of the year.

Schiffer said that before the pandemic, about 35% of the chain’s business was dine-in, but now it’s around 20%, with same-store sales continuing to grow thanks to robust off-premises business.

“Sales continue to climb really rapidly at the brand,” he said. “Our year-over-year stack is now three years running of really positive same-store sales growth, in the high single digits or teens. So we're confident that we can take a 1,450 square-foot space and make that work with a more limited seating area and a more heavy focus on pickup and delivery.”

He added that more real estate opportunities are becoming available as restaurants that stayed afloat thanks to government aid are now closing their doors.

“We're seeing a whole lot of sites come to market here in Denver. In Phoenix we think that there will be some turnover in the next couple of months,” he said.