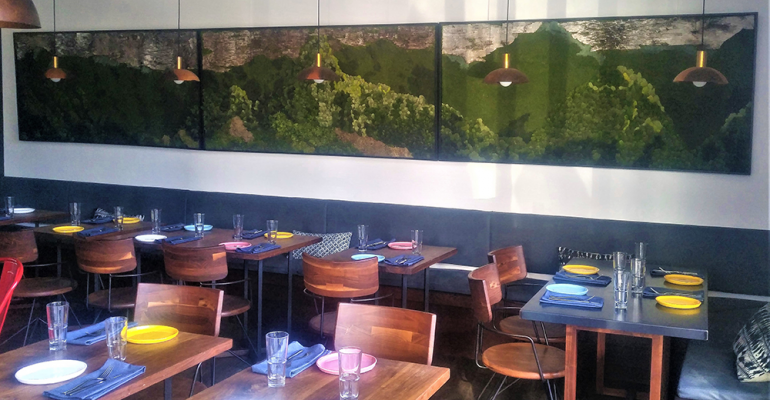 Restaurants have an appetite for art

Paintings, murals, sculptures and installations show a restaurant is serious about the total sensory experience of its guests

It’s common to hear chefs muse about creating art on the plate. But the inedible works of art that become part of a restaurant’s design can contribute just as much to the guest’s experience, and operators today are putting a lot of thought into infusing the dining space with curated pieces that set the tone — and support relevant artists.

“Art is the expression of human creativity, imagination and emotion and it plays an incredible role in enhancing the atmosphere of any restaurant,” said Zayn Silmi, who curated a large mural of two women embracing ice cream sandwiches with a background of bright teal and coral by artist David Girabaldi for CREAM, a Sacramento ice cream sandwich shop, part of a small chain with a couple dozen locations in California, Nevada, Colorado and Florida. “The visuals and art pieces curated for CREAM Sacramento allow visitors to engage with our space.” 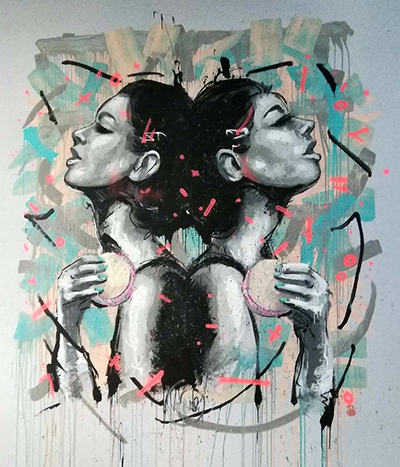 From an artist’s perspective

Ola Volo, a Canadian illustrator from Kazakhstan, has a style that evokes folklore, history and multiculturalism. The subtleties of human nature, cute mythical creatures and the fun little colorful surprises of everyday life in Volo’s art has attracted the attention of such companies as Honda, TED, LuluLemon and Volkswagen.

Starbucks commissioned a mural by Volo for its recently opened Las Vegas Silverton Casino location. The one-of-a-kind, hand-painted mural depicts an equally one-of-a-kind day in the life of Las Vegas, starting — naturally — as the sun goes down. There are also glimpses of the region’s Hoover Dam and Red Rock mountains.

“The environment plays a lot into how this store is built. There’s a glass wall so you can see the sunset. When I was putting the piece together, I wanted to create something iconic,” Volo said. “The [Starbucks] siren is a creature with a beautiful energy. She’s overlooking the whole piece, but her hair becomes the universe, creating space in Nevada and there are a lot of gold and stars hidden in her hair and she’s bringing coffee to the Hoover Dam.”

Women and their place in community are a focus for Volo. She sees creating murals in otherwise industrial spaces as a way to project strong feminine energy.

“A big cement wall needs something beautiful to look at, and that’s very much my style. It’s very feminine. I like to make sure to highlight powerful women on big walls,” Volo said. 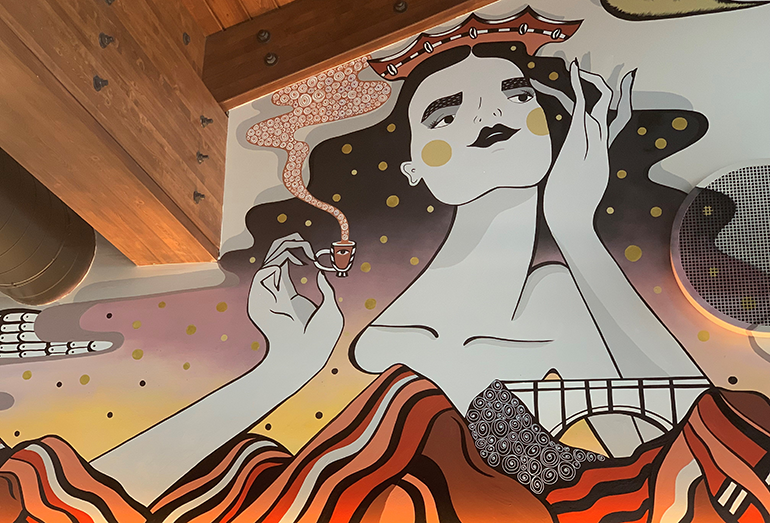 Illustrator Ola Volo made this mural for the new Vegas Starbucks.

The new Vegas Starbucks was being designed from the ground up last year, and Volo worked with architects and designers to present a visual preview for her client. Most of it was done on her iPad Pro, Volo said. She used digital mockups of the store combined with sketches on paper “to get my ideas rolling,” and lots of digital files sent back and forth.

“We make sure it reads correctly. We get a lot of eyes on it before it goes up on the wall,” Volo said. “We refine it and then mock it up on the wall to make sure the client is aware of how it will look. Sometimes a client will see a photo and not really picture [the mural] on the wall.”

From farm to table to wall art

In Texas, Austin is known for its weird and wacky art scene, but so increasingly is Salado, which is home to artist Lonnie Edwards, who put chickens to work to make art for two Dallas locations of the restaurant concept Street’s Fine Chicken.

Edwards let the food inspire the art, quite literally. On the menu are items like Sin Killer Peri Peri Portuguese-style chicken over a biscuit, the Brooder’s Bowl salad and Texas pecan bread pudding for dessert.

On the walls is artwork Edwards created by dipping the feet of chickens in neon-colored paint and letting them walk across canvases.

Marco Street, the concept’s owner, said his art-collecting father came across an article about Edwards in which he was quoted as saying one day he’d get around to making chicken art, but if not, “he’d let the chickens do it,” Street said.

“My dad called him and commissioned him to do his first ten chicken paintings,” Street added. “My dad collects art and we have chickens at home, too.”

The building of the first Street’s location, a century-old structure that was once a drug store, has been in the family since 1978. It was originally an ahead-of-its-time farm-to-table restaurant called Black Eyed Pea, which went on to open 50 more locations in the 1980s.

The food inspired that art by Lonnie Edwards at Street’s Fine Chicken in Dallas.

Now, with Street’s Fine Chicken in place, the menu is modern and so is the art, a good juxtaposition in the historic space, Street said.

“Abstract neo-impressionism really stands out in our environment and really pulls the story together with the chickens,” he said. “All of our chicken is humanely raised in Texas and the chicken art is a common thread.”

The restaurant itself dictated the theme of paintings by edgy urban muralist Mitchell Schorr, which depicts kitchen scenes and chefs in action. Schorr has been noted by academics, including authors Janet Braun-Reinitz, Amy Goodman and Jane Weissman, who wrote: “People enter, rather than view, Schorr’s faraway landscapes, which literally envelope New York’s distinctly urban parks. Schorr, not content with one wall, looks at the total site … Schorr’s projects, characterized by loose brushwork and high color, invite thousands of New Yorkers into exotic, distant landscapes, far from their everyday concrete reality.” 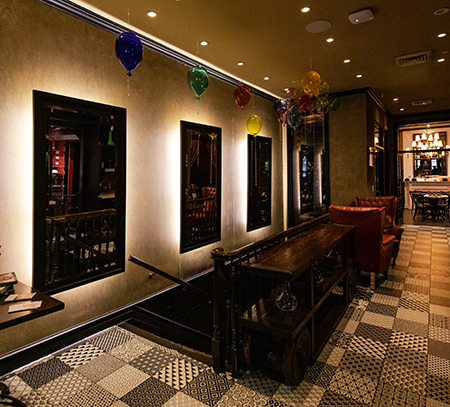 And as for off-the-wall — in both senses of the word — art, David Burke Tavern is also home to a bronze sculpture of a scholarly Humpty Dumpty reading a book from Art by Kimber, Kimber Fiebiger’s Minneapolis gallery/studio that features her fanciful Gaudi-Picasso-Seuss-Lewis Carroll-inspired bronze works. Another cool sculpture in the restaurant is the group of glass balloons that float above the townhome’s staircase by Venetian artist Livio de Marchi.

West Hollywood hotspot Rosaliné commissioned multimedia artist David Phillips to create a large-scale piece for its dining room, an 18-foot by 3-foot installation of panels, hung together for a sculptural panoramic diorama of Peru’s Machu Picchu.

This is a case of art improving the space not just for the eyes, but for the ears as well. The panels double as sound absorbers, reducing overall noise in the always-booked-solid space.

Phillips, who has a degree in theater and set design, built the panels with all-natural materials and insulation foam. Look for glimpses of real wood and several types of moss, including Spanish moss, reindeer moss and sheet moss.

Eyes on the tacos

In San Diego, Boogie shook up his can and created two floor-to-ceiling murals on custom metal panels. At Puesto Irvine, he formed vividly painted tiles into a large set of eyes, keeping watch over the place. Most recently, at Puesto’s $8 million Santa Clara location, Boogie spent a week spray painting murals that evoke a sense of motion.

Carrying on a legacy

George Rodrigue painted his first iconic “Blue Dog” in 1984, as part of a book of Cajun ghost stories called “Bayou.” The dog — which you might recognize from a memorable Absolut vodka ad — is a “loup garou,” or Cajun werewolf-dog. Get ready to feel attacked by a pack of loup garous at the Blue Dog Café, a nearly 20-year-old Cajun place in Lafayette, La.

The restaurant has basically wall-to-wall Rodrigue blue dogs (and a red one, too, above the bar), and there’s a reason for that. The late artist founded this café as a way to bridge the gap between his work preserving bayou art and the culinary traditions, which often made their way into his paintings. Now, under the ownership of his son, Jacques Rodrigue, the café is watched over by the many iconic dogs who keep the artistic legacy alive.

Artist George Rodrigue’s legacy lives on across the walls of Blue Dog Café, a Cajun restaurant in Lafayette, La.