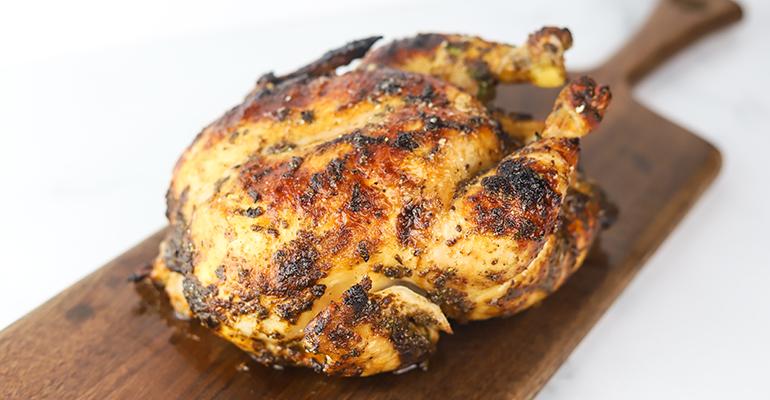 “The exploration of cooking plant-based foods has led me to believe that we really don’t ‘need’ to have meat to have amazing flavors and culinary experiences,” Garces said in the release announcing the two brands. “There are challenges, for sure, but meat isn’t necessary to have something that is delicious and satisfying.”

Garces is using Impossible Foods’ Impossible Burger, made with soy and potato proteins, as well as a black bean-and-soy soyrizo burger, starting at $8. Guests can choose either one and customize their food by selecting a Martin’s seeded roll (which is not vegan because it contains milk powder), a vegan bun, a gluten-free bun or a Bibb lettuce wrap. They can also select from among five different cheese substitutes meant to simulate white cheddar, feta, smoked Gouda, Parmesan and Cheese Whiz for $2 each.

They can get lettuce, tomatoes, pickles or sautéed white onion for free, or for $2 each they can get sauteed mushrooms, caramelized onions, pickled jalapeños or hash browns.

For $2.50, they can get avocado or vegan versions of chorizo, egg, bacon or chili.

Starters, each $7, include “Chips of Latin America,” a combination of yucca, plantain and malanga chips with sofrito salsa; yucca cheese bread (pan de bono) with guava butter; and cheese or chicken empanadas.

A mixed green salad is $7, and a Greek salad and an Ensalada de Aguacate (sliced avocado, cherry tomato, Romaine lettuce and sliced hard-boiled egg in a lemon-honey vinaigrette) are $12 each.

Customizable chicken bowls, over yellow rice or romaine lettuce, also are available for $14.

Sides ranging from $6 to $10 include fries, red bean stew, grilled Peruvian corn, roasted potatoes or cauliflower in huancaina sauce and griddled asparagus in a Parmesan emulsion with lemon.

The new virtual brands are part of the celebrity chef’s own personal rebranding, which began in September 2020 with the relaunch of his web site, josegarces.com as well as virtual cooking classes called Latin Live and a series of eight-minute cooking videos called Cooking Space.

They also follow Garces’ use of ghost kitchens with the re-introduction in December of Garces Trading Company as an online marketplace from which customers could order from Garces’ restaurants, including Amada, The Olde Bar and Village Whiskey for takeout and delivery.

Garces has eight restaurants in Philadelphia, along with two in Atlantic City, N.J., and one in New Hope, Pa.

He’s also a winner of the TV cooking show Iron Chef, the 2009 James Beard Foundation Award winner for best chef in the Mid-Atlantic, author of two cookbooks and a philanthropist through the Garces Foundation.