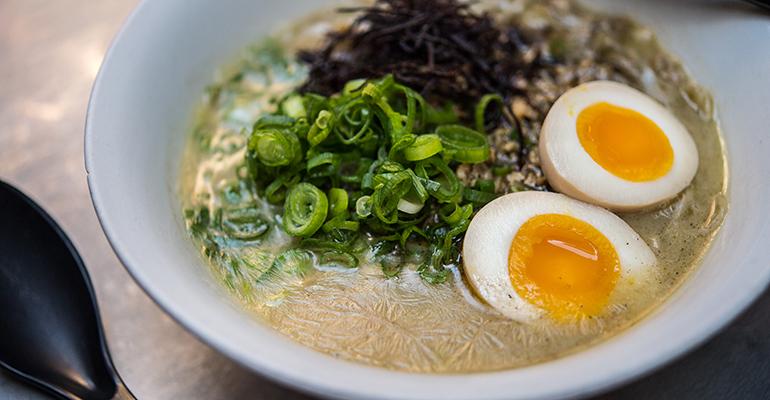 The Ivan Ramen menu will only be offered for takeout and delivery at Blue Sushi Sake Grill restaurants.
Trends>New Restaurant Concepts

New York noodle shop Ivan Ramen, the hip and highly popular destination on Manhattan’s trendy Lower East Side, has leapfrogged across the country to Nebraska through a new partnership with multiconcept casual-dining operator Flagship Restaurant Group.

Omaha, Neb.-based Flagship, parent of the 14-unit Blue Sushi Sake Grill and other concepts, recently began offering Ivan Ramen’s menu for delivery and takeout only through a ghost-kitchen-style operation set up in the kitchens of its Blue Sushi restaurants.

Nick Hogan, co-founder and CEO of Flagship, said he and Ivan Ramen founder Ivan Orkin have been friends for several years and had considered opportunities to work together in the past. The pandemic set the stage for this new business arrangement.

“As we started to pivot towards delivery, we recognized just how quickly consumers were themselves pivoting towards delivery and third-party delivery platforms, and saw the rise of some of these ghost kitchen types of concepts,” he told Restaurant Hospitality. “We thought his menu lent itself to delivery, and we both thought this would be a cool way for us to partner not only through the pandemic, but in the future together.” 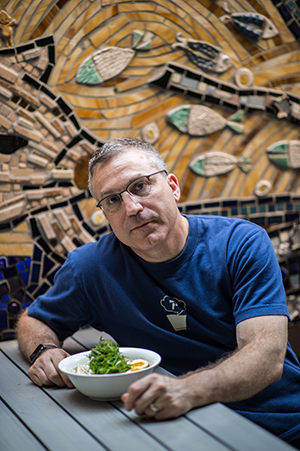 Photo: Ivan Orkin outside his Ivan Ramen restaurant in Manhattan.

Orkin has gained celebrity status through his ramen shops — he opened two in Tokyo before opening in New York in 2013 — and through his appearance on the Chef’s Table TV series. The two restaurateurs had both enhanced their delivery capabilities during the pandemic and shared a commitment to providing high-quality food and experiences, Hogan said.

Flagship, after closing all of its locations at the start of the pandemic last March, has since reopened and secured arrangements with third-party delivery providers that allow the company to have a viable off-premises business. That facilitated the partnership with Ivan Ramen, which has been successfully installed as a takeout- and delivery-only concept in four Blue Sushi locations Nebraska, with more expected to come on line in the coming four to eight weeks.

In order to begin offering the Ivan Ramen menu, Hogan said the Blue Sushi restaurants streamlined their own menus slightly — a process that was underway anyway before the partnership began — and made more efficient use of the back kitchen areas of the restaurant, out of the way of the main sushi line. They also made what Hogan described as “modest” investments in new equipment to execute the menu, which focuses mainly on Ivan Ramen’s signature ramen dishes, but also includes a few other items, such as Japanese Fried Chicken with toasted garlic caramel, togarashi and shiso ranch, and Steamed Pork Buns with soy-plum glaze and picked daikon.

Ivan Ramen personnel worked closely with Blue Sushi to prepare the restaurants and kitchen staff, creating what Hogan called a “team within a team” to execute the concept within Blue Sushi’s kitchens. The concepts will remain entirely separate, however, with the exception of some subtle cross-marketing that could occur, he said. 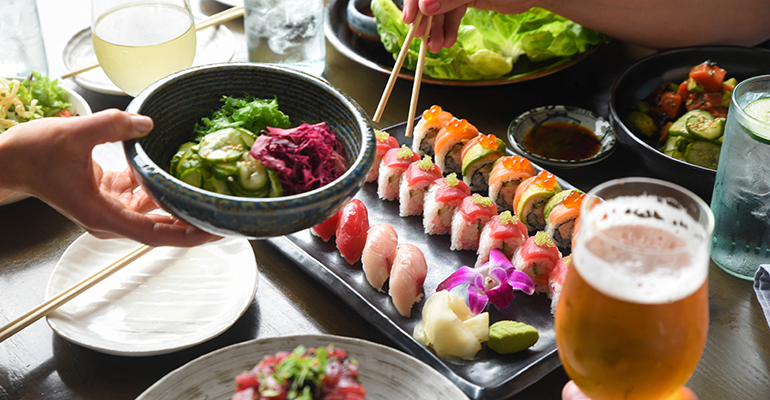 The Blue Sushi team and Orkin also worked together to come up with a selection of sakes and Japanese lagers that suit the food menu.

Ivan Ramen will receive a share of the profits generated through the concept, Hogan said, describing Orkin’s stake in the venture as significant in terms of his time and commitment, but otherwise free of liabilities on the expense side of the business.

The Ivan Ramen brand has a strong following, Hogan explained, that has been generating media buzz and strong word-of mouth around the new expansion already. Feedback from customers has been “really positive,” Hogan said. 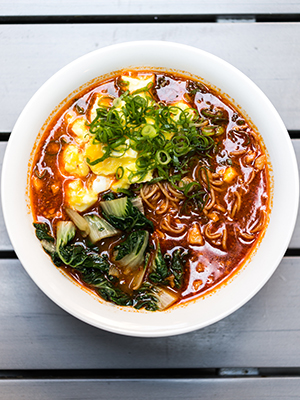 Part of the challenge of the rollout is ensuring that the supply chain can support the level of ingredient quality Ivan Ramen requires. Orkin sources many of his ingredients directly from Japan. An outsourced manufacturer is making the noodles to Ivan Ramen’s specifications, and other ingredients are in a procurement pipeline to support the expansion of the concept to other Blue Sushi locations, Hogan said.

“He went from relatively low usage on some [ingredients] to higher usage overnight,” said Hogan. “That's why we’re phasing in some of these stores, just to make sure we’ve got a strong supply chain in place, and we don't have to start and stop.”

In a statement, Orkin said he was excited to bring his concept to new markets.

“I’m thrilled that I can give people an authentic experience that’s on par with what they’d have at my Clinton Street location, in the comfort of their homes in locations like Lincoln, Nebraska or Dallas, Texas,” he said.