/sites/all/themes/penton_subtheme_restaurant_hospitality/images/logos/footer.png
Recent
Recent
Florida bar owners sue Gov. Ron DeSantis over coronavirus shutdown
Jul 13, 2020
Restaurants take advantage of outdoor space as indoor dining regulations change with coronavirus surges
Jul 10, 2020
Large restaurant chains have mostly recovered from the effects of COVID-19, while the rest of the industry still struggles, Bank of America study says
Jul 10, 2020
Ample Hills Creamery to be bought out of bankruptcy by Schmitt Industries
Jul 10, 2020
Is safety affordable? How restaurant operators are factoring PPE into their budgets
Jul 10, 2020
Featured
Kavachi Ukegbu celebrates her Nigerian heritage in Houston and speaks about both the racial and health crisis
Jul 09, 2020
Texas and Florida shut down on-premise service at bars as coronavirus case counts soar
Jun 26, 2020
How restaurants can embrace diversity and inclusion in the wake of the Black Lives Matter resurgence
Jun 18, 2020
Carl Howard, CEO of Fazoli’s, discusses how the chain has thrived during the coronavirus pandemic
Jun 11, 2020 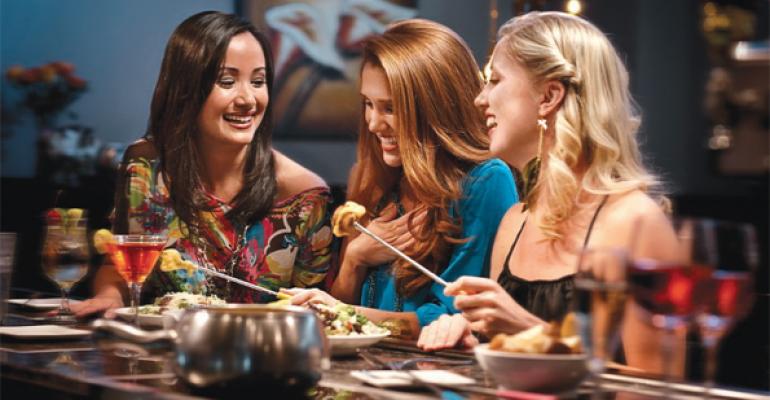 If you think you know your audience, think again. Restaurant guests can be a fickle bunch. &bull; See more Consumer Trends

The last few years have been especially brutal ones for established restaurant brands. Some have scaled back once-ambitious expansion plans or, worse, shuttered locations. Some have simply vanished from the landscape. Their common misstep? Arguably, it was failure to keep up with the changing whims of the dining-out public. Here, we’ve pulled together some of the latest research to help you create a road map for survival over the next decade. Four broad categories of factors are influencing how consumers use restaurants: dining styles, the definition of value, instant gratification and demographics.

They want to be comfortable.

The move toward more casual experiences continues unabated. Once upon a time high-ticket white tablecloth  spots set the trends; today it’s chef-driven concepts that draw the hippest customers. These days, it’s more likely that food trumps the setting and the risk of feeling underdressed for the occasion is slim. Open kitchens allow guests to feel like they are a party to the prep and underscore the chef’s reverence for the ingredients. Fast casual concepts have capitalized on this trading down to more relaxed venues, and there is no end in sight.

For a full-service brand like The Melting Pot, this trend has necessitated a rethinking of the whole experience. The fondue chain had become known as a special occasion spot, with four-course meals that stretched out over a couple of hours. After doing some research, the company revamped its menu, creating more a la carte options and encouraging guests to customize courses; changed from per-couple pricing to individual pricing; and made the menu easier to navigate. Melting Pot even produced a video to explain the experience. The revamped menu stresses value and variety instead of forcing guests to commit to more than they really want. This more approachable package is designed to induce more frequent visits.

State Bird Provisions, one of the newest additions to the San Francisco restaurant scene, pairs fine dining sensibilities with a service style quite the opposite of the expected: Some food is ordered from the menu, but guests choose about half of the items from dim sum-style carts wheeled through the restaurant. The carts have brought a lot of attention to State Bird, but it’s the content of those little dishes--delicacies like kimchi yuba with smoked egg; sweetbread meatballs with fig jam; and pickled vegetables, guinea hen dumplings with broth—that has wowed critics and guests.

Members of our plugged-in, tuned-out society occasionally crave some face-to-face human contact, and communal tables increasingly are included in restaurant layouts to provide a sense of community. At À Côté restaurant in Oakland, CA, a combination of long tables and private seating gives guests the option of where they’d like to share their meals. Cochon in New Orleans, Lebanese Taverna in Baltimore, El Dorado Kitchen in Sonoma and countless other eateries offer their own versions of the communal table, not so long ago a rarity.

Value remains important, but it's taking on new meanings.

The economy still weighs heavily on the minds of many consumers and is affecting their restaurant spending, especially splurges. But a consumer insights survey by Empathica found that more consumers remain optimistic (33 percent) than pessimistic (14 percent). That may represent an opportunity.

“Brands should appeal to consumers’ sense of optimism and sell them an experience that builds their hope,” says Gary Edwards, the company’s chief customer officer. “While there is an ongoing temptation to focus solely on price and promotions to drive purchase behavior in a tough economy, there remains an opportunity to stand out from the competition by creating unique and differentiating customer experiences.”

As the economy regains its health, many expect consumers to trade back up to full-service restaurants more often than they have since the recession. Figures from Technomic indicate that about one fifth of casual-dining customers are visiting fast casual (20 percent) and traditional casual dining (17 percent) restaurants more often than two years ago. But Technomic suggests that capturing some of this renewed demand will require full-service restaurants to differentiate themselves enough to justify their higher check averages.

One way to do this is to showcase less-familiar ingredients and focus on quality, two steps restaurants are already taking. According to Datassentials, which analyzes menus, out-of-the-ordinary choices like pork belly, steak tartare, wild salmon, sopressata, Alaskan halibut and pan-seared chicken are showing up on more menus. Specialty breads, premium cheeses (even on something as pedestrian as a burger) and other touches are turning up more often as well.

And when it comes to pricing, one size does not fit all, either. BrandAnalytics used social media analysis to help Parasole Restaurants tweak the value proposition at a new location of its Burger Jones concept. When the new store opened in a working class Minneapolis neighborhood, the clientele balked at prices deemed acceptable at the first location. So the company devised a menu that included some smaller portion sizes at lower price points. After that shift, social media comments took a more positive slant.

They want what they want -- now!

Instant gratification has become a way of life for many Americans. How else can you explain the Hartman Group’s claim that last year some 52 percent of all eating occasions involved snacks? That’s up from 49 percent in 2010. On average, Americans eat 2.35 snacks per day. The most popular snack choice? Chips and soda. The fastest growing category? Fresh fruit, according to NPD Group.

Now that snacks have evolved into a fourth daypart for many restaurants, this schizophrenia will be a challenge. Restaurants will need to provide a combination of indulgent small bites along with healthful options for those eating carefully.

Increasingly, Americans crave something good and good for them. The proliferation of Meatless Monday offerings by restaurant operators is plugged into the desire by consumers to eat lower on the food chain, even if it’s only one day a week. More chefs are including meatless options on their regular menus as well. After one restaurant in Chicago drew some press for adding cauliflower steak to its menu, the imitators quickly followed.

Fermented, pickled, cured, brewed and lacto-fermented foods are finding new fans, and tons of retail products are reaping the benefits. Consumers are sold on the notion that these foods—which include items like miso, sauerkraut, tempeh, vinegars, pickles and yogurt—will aid in digestive health, improve immunity through probiotics and other beneficial bacteria and reduce chronic inflammation, among other benefits. Often homespun, foods in this category also satisfy the desire to simplify.

And never underestimate the appeal of a treat. A recent Culinary Visions Panel asked more than 200 regular casual restaurant customers what they thought about certain menu concepts ranging from minor modifications of perennially popular items to those using specialty ingredients and nontraditional proteins. The group generally preferred items perceived to be less healthy and more decadent. Choices like BBQ brisket and an Italian meatball sub were most popular. The conclusion: casual dining customers tend to prefer foods they perceive as a treat over those they see as healthy alternatives.

Once families with kids, Millennials and empty nesters were considered the target audience for restaurants. But many more subsets of the population are getting attention.

Foodies. It’s no secret that Americans are more obsessed with food. Three-quarters (76 percent) of U.S. adults enjoy discussing new and interesting food, 70 percent consider themselves knowledgeable and 54 percent regularly watch cooking shows, according to the National Association for the Specialty Food Trade.

What are the implications for restaurants? NASFT reports that foodies are most likely to seek out items identified as natural, organic, locally sourced, eco-friendly artisanal, sustainable and fair trade. According to consultant A. Elizabeth Sloan, they are also more apt to be health aware and count calories; 36 percent value nutritional value more than anything and 31 percent are looking to lose weight.

Actually, according to a recent study by A. T. Kearney, a consulting firm, some 30 percent of customers now will only patronize restaurants that have at least some local fare on their menu. The good news: Foodies and others who prize local ingredients are willing to pay a premium for them.

Men and women value different qualities. The National Household Study by the National Restaurant Association last year found that men and women are looking for slightly different things when they choose a restaurant. Women care more about having healthy menu choices, locally sourced food and organic or environmentally friendly menus; men, on the other hand, seek eateries with takeout or delivery options and food they haven’t tried before.

Wealth is a big influence. Affluence, not surprisingly, is a major factor determining where people eat. Technomic recently segmented consumers into four groups—working, lower-middle, upper-middle and affluent—based on household income, household size and cost of living. More affluent consumers are seeking something new or innovative, while lower-income groups are likely to order takeout and upper-middle income households are interested in lower fat and calorie options. How to address them all? Design a varied menu.

“On one side of the menu there are products that appeal to price-sensitive customers (e.g., dollar menus),” says Darren Tristano, Technomic’s executive v.p. “Lower-priced items can retain customer patronage and possibly lead to trading up at future visits. In contrast, you’ve got items that appeal to customers who see price as a secondary factor. They may be trading down from an expensive restaurant but still want some higher-end menu options. Most of the menu, however, focuses on your core products. Now you have something for everyone.”

Boomers and seniors: back in the driver’s seat. Many marketers wrote off Baby Boomers years ago, instead training their sights on younger generations. But recent findings by The NPD Group say that, at least for restaurants, baby boomers and the generation ahead of them, called Mature Traditionalists, are back. In the last five years visits by older patrons have grown steadily, while traffic from Millennials has thinned. Boomers and seniors have increased their share of restaurant traffic by six percentage points since 2008; conversely, visits by Millennials have decreased by the same amount.

Ethnic minorities: no longer so minor. Within the next three decades, non-Hispanic Whites are projected to represent less than half of the total population in the U.S. They’re already a minority in four states and 22 of the largest U.S. metro areas. Hispanic and Asian Americans are reproducing at a much faster rate than Whites, and Asian Americans are the fastest-growing ethnic group, expected to more than double over the next four decades.

These two emerging minority groups seek different qualities in restaurants, and their needs should be factored into any menu, marketing or design decisions.