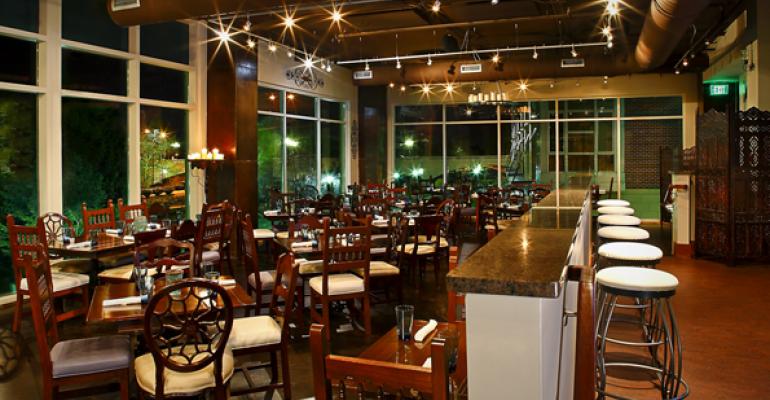 Michael Kramer is back in the state where his career took off, just as Greenville is poised to become the South&rsquo;s top restaurant city. &bull; See more Chef Interviews

Michael Kramer left South Carolina in 2006, but he never really forgot it. He opened McCrady’s in Charleston in 1999 to national acclaim and an AAA four-diamond rating, helping put the antebellum city on the map as a culinary hotspot.

He went on to find similar successes in Houston, but in April of this year, he returned to the state he now calls home. This time, he’s moved upcountry to Greenville, an emerging restaurant destination Esquire called the “next big food city of the South.”

He’s back as the executive chef of culinary operations for Table 301 Restaurant Group, working for Carl Sobocinski, the man at the forefront of the culinary renaissance there. Kramer recently offered some insight into Greenville, what’s next for Table 301 and why he shaves his legs.

RH: What brought you back to South Carolina and Greenville?

Kramer: I loved South Carolina and missed it. I had come up here to do Euphoria (a weekend event focused on food, wine and music) for a number of years, and I knew Carl. I always loved coming up here, and it’s a great place to ride my bike. At some point Carl and I would like to do a concept together, and they’ve got so much going on, he said he’d love some ideas and input on everything. So that’s why I’m here.

RH: There are more than 100 independent restaurants within a stone’s throw of Main Street. Why has Greenville become such a culinary destination?

Kramer: Several major companies are located around Greenville and a lot of people are moving here from different parts of the country, plus there are a lot of Clemson grads (the university is 30 miles away), so the city is growing and there’s a greater need for more food. And now more food writers are paying attention. Carl was one of the pioneers, if not the main one, but it seems like every year there are more and more restaurants. A number of restaurants have just opened. There’s just an appeal to it. I was in Charleston at a similar time—there wasn’t even a third of what they have now—and I was a part of that pioneering process. I felt like when we opened McCrady’s it was beginning to turn, and people were coming and discovering the South. Food was a natural progression and chefs wanted to come. That’s happening here now.

Kramer: I do—it’s where my address is—but my parents would say my home is L.A. But I’ve lived more than half my life away from there. This just feels natural and comfortable.

RH: What have you been up to since starting with Table 301?

Kramer: We just opened Passerelle Bistro on June 10. That’s a project we’ve been working on a while and it’s up and running now. I got here about six weeks before it opened, so I worked some with chef Teryi Youngblood on putting the menu together, tasting and whatever else needed ironed out.

RH: So what exactly else does the executive chef of culinary operations do?

Kramer: I’m mostly spending time in kitchens, mentoring chefs and making sure they’re on track with menus. We’re rewriting some of them, and we just did a pretty big overhaul at Nose Dive. I’ve been working with Joey Pearson on some redefining and repositioning there. I’ve been spending time at Soby’s, and we’re also opening up a taco place, Papi’s Tacos, with Jorge Borrales.

RH: Tell me about the new concept.

Kramer: Jorge comes from Mexico and has been working with Carl for more than 15 years, at Soby’s in the kitchen and he helps out at Lazy Goat. He’ll be full-time at the new place. It’s a mostly takeaway taco spot with Mexican street food. He did most of the menu and I’ve been involved in putting the space together.

RH: Did you know any of the chefs before joining Table 301? How involved are you with each restaurant (Soby’s, Soby’s on the Side, Nose Dive, The Lazy Goat, Devereaux’s and now Passerelle)?

Kramer: I knew most of the chefs before. My goal is for them to be the chefs, for them to write the menus. What I want to do is give them some direction and guidance. In a sense maybe my thumbprint is there, but it’s really for them to shine and do their own thing. I don’t want to put handcuffs on anyone. But I will have a say, and bring ideas and so will they.

RH: Do you have a typical day of work?

Kramer: It’s a little bit of everything. The other night chef Teryi got stitches in her ankle, so I had to go Passerelle Saturday night and work the expo line. I’m still hands on and involved—I don’t punch out at 6. I visit each store everyday. If we have catering for 300 or 400 at Soby’s on the Side I’m there. With Papi’s, I’m getting with construction guys, working with equipment and moving things around.

RH: Do you miss being in the kitchen of your own restaurant?

Kramer: I do. I enjoy having my own team, running the pass at dinnertime and being where the action is. It’s one of the things we love to do as chefs, but I know Carl and I will do a concept together soon.

RH: Besides restaurants, your other passion is cycling. How’d you get into that?

Kramer: I raced when I was in high school in California and did the junior college thing and raced pretty seriously as an amateur. But I realized I didn’t have the legs to be a true pro, so I decided to get into cooking. I rode 6,000 miles last year in Houston. I still ride for a team based out of Houston, but maybe that will change. I ride and train as much as I can.

RH: How often is that?

Kramer: I’ve already done three days this week and will hopefully do a fourth. I ride 100 to 150 miles a week. It’s harder here, because it’s so hilly. You can do the same time, but it’s fewer miles here. I’ve been shaving my legs since I was 18 years old and had a passion for this sport forever. I don’t live some of the food and beverage lifestyle—I’ve been the guy going home to crash so I can do 25 to 30 miles the next morning most of the time.

Kramer: It’s not really for aerodynamics, more tradition. Plus if you wreck, you get real bad road rash and it’s a lot easier to have it cleaned up.

RH: You’ve worked with some great chefs through your career. What did you learn from them?

Kramer: I worked for a Frenchman (Roland Passot, at La Folie), an Austrian (Wolfgang Puck at Spago) and a good old boy from Kentucky (Dean Fearing at Mansion on Turtle Creek). Roland gave me my first opportunity, and I worked seven months for free and then got paid. I learned about seasoning food and how to handle myself in a kitchen. I got thrown in and learned a lot about cooking, the finesse of food and about products I’d never seen. Then with Wolf, I learned sauces. I was a saucier at the original Spago, and made 10 to 12 sauces a day. I also learned a lot about pasta, especially how to make risotto. Dean was sort of my graduate school. I was a sous at the Mansion and learned day-to-day operations and how to see the big picture. Sauces were big with Dean as well, and learning what five stars and five diamonds meant was important. I think one of the guys that influenced me the most was Marc Valiani, who passed away from Lou Gehrig’s disease [in 2011]. He was the sous chef at Spago when I was there and he taught me how to handle myself in the kitchen. He taught me about taste and flavor. He was an amazing chef.

RH: When can we expect to see you at your own restaurant, and any clues as to what it may be?

Kramer: I don’t know what’s next. We keep saying we’re going to sit tight, but something always comes up. I’d say crossing my fingers that we’ll get through this year with everything going on and maybe hit the ground running in January. Whatever style of concept I do, it will be real simple: Simplistic, rustic cooking and maybe something from Italy. We’ll see. I’m not going back to fine dining, although I had a really extraordinary time with McCrady’s. It was a special place with special people at a special time. As I’ve gotten older and ripened, like most chefs, I want to cook the food I want to eat—like at Passerelle, with its real simple, clean and flavorful food. Or at Lazy Goat, with the same kind of thing. I love fine cooking, but it’s getting harder to make money there.

RH: Speaking of the Table 301 portfolio, any favorite dishes?

Kramer: Joey [Pearson] just put a kick-ass Duck Confit Mac & Cheese with Cheez-its on the menu at Nose Dive. Delicious. Teryi [Youngblood at Passerelle] knocked it out of the park with her cassoulet, with duck confit, sausage and local shelling beans. One of my favorite spots to eat is the Lazy Goat (with chef Vicky Moore). Some of the flavors—Mediterranean, Moroccan, Spanish, Italian—are super delicious. The Papas Bravas with chorizo and olive oil is fresh, clean and simple. I love the calamari, too. It’s not fried. There’s just a real purity with food there.