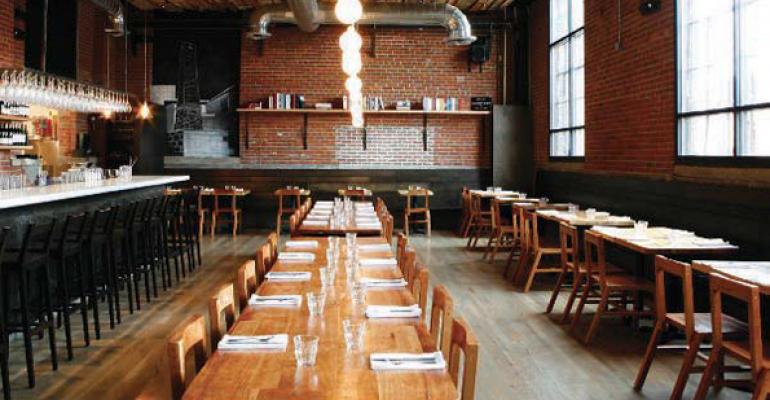 Phil Krajeck has seen some of the world, growing up in Belgium, training in Switzerland, putting in time at the likes of Blue Hill at Stone Barns, Gramercy Tavern and, most recently, as chef de cuisine at the four-diamond Fish Out of Water in Santa Rosa Beach, FL. A few years ago he started contemplating his next move, ultimately settling on Nashville, and last year he opened Rolf & Daughters in what was once a boiler room for a textile factory. He shared his thoughts on Nashvhille.

Krajeck: We had some roots and connections here with friends and family. It’s a great town, an amazing place to live. It balances being in the big city with a small town feel, and our kids will get a great education. All of that combined made it an easy decision for us.

It took about four years to get everything together for the project, from doing the model to getting funding and finding the right location. The location probably took the longest because we did not want to put a restaurant in a new construction site, we wanted it to be in an old building. We wanted something that felt a little more timeless, with some character. You can’t replicate century-old brick walls and window frames, even with reclaimed materials. This room housed the boiler that at one point powered this textile mill. It’s a perfect fit and a perfect second life for the space. When you’re in it, it feels right.

RH: What’s the interior like, and how difficult was it to retrofit the space?

Krajeck: We tried to use the same philosophy that we follow with our food in the design and material selection. Our goal was to find local craftsmen who could help create something that was beautiful as well as highly functional.

The freestanding furniture was all made from local Tennessee hardwood, not reclaimed wood. All the wood came from a family farm owned by Holler Design’s Matt Alexander; he thins out the forest, mills the wood himself and makes it into furniture. It’s incredible to work with someone who is so passionate. For the ceilings, we used sawmill press scraps. Our signs were made by a local craftsman, who designed them with some reclaimed metal to look like vintage signs. And the industrial-style filament lights were made by another local craftsman.

The biggest challenge is that it’s a historic building, so we had to get approval for any sort of change. Also, 100-year-old walls aren’t all straight. The concrete slab was four feet thick in some areas, which made cutting through it for plumbing a little tricky. Other than that, it wasn’t too crazy. To be honest, having warm exposed brick made it easy—we left that along with some of the idiosyncrasies of the old, chipped concrete.

RH: You don’t like to pin a label on your food, but how would you describe it?

Krajeck: When you’re planning a restaurant, everybody wants to know what the food is going to be. It’s one of the questions you’re always fielding in the process of getting a restaurant together. You can’t just say you’re going to make delicious seasonal food. So we have been trying to come up with some label that doesn’t put us in a box.

What we serve is rooted in traditional European cooking. We’re using off-cuts and cooking with what’s available around us and making it modern. When we do use modern technique it doesn’t show up on the plate, though. We’re not trying to do really precious presentations. Everything should come off as being very simple and rustic.

RH: What are some of the highlights of the menu?

Krajeck: All the pasta is house-made. Whenever possible we buy whole animals and butcher them in house, and we use every bit of the animal. We bake the bread in house, and it’s naturally leavened, so it takes three days to produce one loaf of bread. We change the menu frequently so we can use what’s best at the moment.

We want our food to be really clean, to highlight every ingredient and make it taste more like it naturally does.

RH: Is Nashville ready for a restaurant like Rolf & Daughters?

Krajeck: The restaurant scene here is on the cusp of some really great things. There’s a tradition in Nashville of roots restaurants that specialize in meat-and-three meals or BBQ, for example, or specialties like hot chicken—super-crispy, spiced fried chicken served on bunny bread with pickles—that are pretty uniquely Nashville. Over the last few years there have been more restaurants opening here that are matching what’s going on in the rest of the country. They’re locally focused, a little more forward-thinking, with more adventurous menus and stripped-down tables. There are quite a few newer cocktail spots, super-nerdy coffee shops are opening—it’s really becoming quite a progressive food town.

RH: What ingredients or techniques have sparked your interest lately?

Krajeck: Fermentation, although that’s nothing new—actually, it’s ancient. We are using a planxa a lot for things like cooking shellfish in the shell and charring vegetables. It adds that burnt complexity. What we do is rooted in being a neighborhood restaurant where people can eat every day. The trailblazers are in the high-end restaurants. We pick and choose things that apply to our concept.