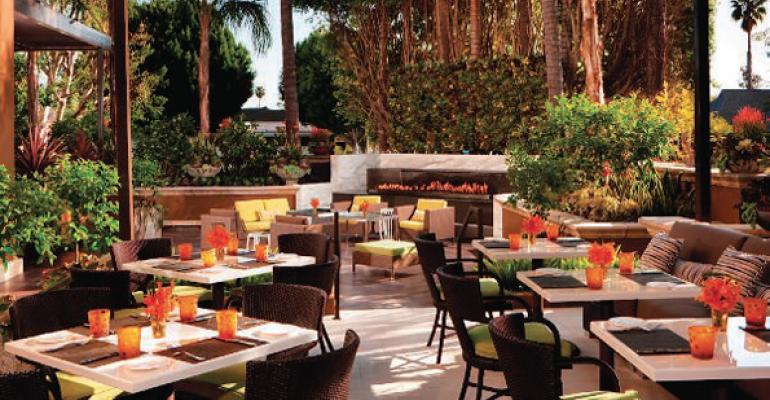 <p> Williams&rsquo; prize for winning Chef Wanted with Anne Burrell? A job at Culina, with its stunning indoor-outdoor design and this lush garden terrace.</p>
People>Chefs

Mette Williams certainly didn’t need to go on TV to find a new job. She already had a good one, as executive chef at Areal in Santa Monica, CA. Even better, she had a resumé that included eight years of experience working for Wolfgang Puck and Lee Hefter. Still, the 33-year-old couldn’t pass up a chance to test herself on Chef Wanted with Anne Burrell.

Williams aced it, and her reward was the executive chef job at Culina, Modern Italian, an award-winning restaurant at the Four Seasons Los Angeles at Beverly Hills. She started in January, two months before the show first aired on the Food Network, and recently chatted about the new job and why she went on TV to get it.

Williams: The transition has been good and I’ve gotten to know the current menu. There are some staples that won’t change. We’ve only been open three years, but there are some favorites already. I’ve gotten to know my staff and the whole hotel, and just really played around with the food, honing my Italian-inspired creations. This is the first Italian restaurant I’ve worked at.

Not really, I’ve got a heavy Mediterranean influence after working with Wolfgang Puck for so long. And I’ve been making my own pastas and sauces since I’ve been cooking.

RH: What are some of those favorites you’re keeping?

Williams: We’ve got a classic spaghetti dish with a really great, basic tomato sauce you don’t want to mess with. And a grilled rib eye—I don’t know why anyone would want to change that. Those are two items that aren’t going anywhere, as well as the corn ravioli.

RH: Do you feel any pressure taking over such a popular and acclaimed restaurant?

Williams: At times. Culina has a dedicated clientele with high standards, so there’s pressure to maintain the integrity of the food, while incorporating new dishes.

RH: What are some of your new creations?

Williams: I’ve tried to bring in a little more spice that comes from the surrounding countries, like a mussel dish—Zuppetta di Cozze—with a Moroccan sauce, fennel and garlic. We also added pasta with ricotta and egg yolk—Tortellone di Ricotta e Polpa di Granchio—and an Alaskan halibut over a zucchini puree—Ippoglosso.

RH: How did you end up on Chef Wanted with Anne Burrell?

Williams: I was recruited by the Food Network and it was kind of a last-minute decision. Taping was going to start within four to five days. I thought, “Oh my gosh, do I want to do the show?” I had a solid job, but I’d never been in a cooking challenge. I had been thinking about doing Top Chef, but being gone six to eight weeks wasn’t in the cards with a young son. So I thought just to get my feet wet, why not do this challenge. It was in L.A., and filming was just two days long.

Williams: There were four competitors, and our first challenge was to make seafood pizza. You’re in a restaurant you’ve never been in before and they say, “This is where your produce is, this is where you work,” and that was it. No walking around, just go. It was a free-for-all. The second was a four-ingredient challenge and then the last was a dinner service for 60 to 100 people. We had just a few minutes to create a menu with two pastas, two entrees, two appetizers and one dessert. Then we met the staff and had a 15-minute sit down with them, and then only three hours to prep. It was like, “I don’t know how you work, but don’t [mess] up my food.” They were great, but it was intense.

Learning from the masters

RH: Now that you’ve got a taste, do you want to do more TV?

Williams: I don’t know. Cooking competitions have never been something I was too interested in. If someone wants me to do local news cooking segments, I’d probably do those. As far as challenges, I don’t know if it’s for me. Depending on the situation, I’d love to be a host on a travel cooking show, but those challenges? I think I’ve gotten them out of my system. For now.

RH: You spent eight years with Wolfgang Puck, first at Postrio for a year, then five at Spago Beverly Hills and two at CUT, his newer steakhouse concept. What did you learn from him?

Williams: He wasn’t cooking a whole lot, but he’d still come in a little bit. Just watching him in his business—the way he communicates when he visits tables, he just makes people feel special. He makes people feel good about what they do.


RH: What did you learn from working with Lee Hefter, his executive corporate chef?

Williams: He is a mastermind of execution. He showed me how to care for food and make it shine for what it is, to enhance it with certain ingredients. Instead of adding in all these other things and molecular stuff. It’s fun to see that done, but you’re still hungry after eating it.

Williams: It should be all about comfort. I want everyone to come to the restaurant and be able to recognize something from their past. That’s very important—your history, growing up. You want to have those good memories come back through eating. I like family style, rustic and bold flavors, but not fussing too much with ingredients. We use local as much as we can and then we really try to use the best ingredients in the best possible way.

RH: How’d you get into cooking as a career?

Williams: I’ve been cooking ever since I could stand. It’s always been a part of my life, but I never really thought about being a professional chef. My mom suggested it while I was on the waiting list for a nursing program. I wanted to go into medicine, but she asked if I ever thought of becoming a chef. “You’re always creating recipes, watching Food Network, you don’t do homework and you’re always cooking,” she said. “Let’s take a trip to San Francisco and check out a culinary school.” I fell in love. I guess you should always listen to Mom.