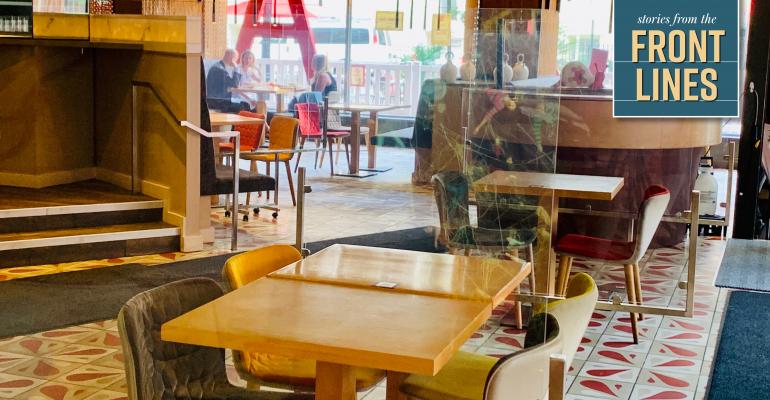 Plexiglass, QR codes and sanitation specialists are now part of the dining experience

ThinkFoodGroup , the 25-unit restaurant company headed by José Andrés, is taking its time reopening its dining rooms as restrictions lift in the jurisdictions where it operates, which is how the company is exhibiting its leadership during the novel coronavirus crisis, according to chief operating officer Eric Martino.

“We wanted to lead by not being first,” Martino said. “We’re letting health lead the way in how we’ve been approaching this.”

All of the restaurants had closed their doors by March 13, and they had been practicing social distancing in the days before them as the severity of the global pandemic became apparent, Martino said.

Then they turned some of the restaurants into community kitchens — feeding people in need as well as front-line workers — with a skeleton crew of volunteers from their staff.

Martino said they were truly volunteers, as every team member continued to get paid during the first five weeks of the shutdown, thanks in part to Paycheck Protection Program funding. Salaried employees have stayed on the payroll throughout the crisis, he said.

While some restaurants became community kitchens, others, like many restaurants across the country, turned into small grocery stores and others did takeout and delivery. Still others simply stayed closed. 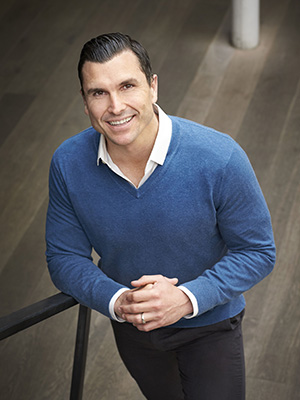 “We still have restaurants in hibernation, obviously, as we’re taking a very cautious approach to the outside world as we know it,” Martino, left, said.

That cautious approach includes the development of 55-page reopening and operations playbook that follows Centers for Disease Control and World Central Kitchen guidelines to help make sure that all of the restaurants reopen and operate safely.

Right now, nine of the group’s restaurants are open — the Jaleo restaurants in Washington, D.C., Crystal City, Va., and Las Vegas, the Bazaar Meat restaurants in Las Vegas and Miami, Zaytinya in D.C., Chino Poblano in Las Vegas, a kiosk facing outside from Mercado Little Spain in New York City, and one D.C. location of the fast-casual chain Beefsteak.

“Before we even brought our team members back we got a quality assurance director that … did an interview process with each team member that we were going to bring on, making sure that they had a clean bill of health, that they were happy, that they were healthy, ready to come back into the workforce and that they felt comfortable doing that,” Martino said.

Each restaurant also has a sanitation specialist for each shift — a former busser whose sole job is to wipe down and sanitize all seating areas between parties.

Some restaurants have antimicrobial foot mats that people walk on as they enter, and the D.C. and Virginia restaurants have plexiglass around the host stand and also hanging from the ceilings in walkways and between tables — even though those tables are at least six feet apart in compliance with CDC recommendations.

Obviously, everyone wears masks and gloves.

Each table also has a QR code that guests can scan to pull up menus on their phones, complete with wine list and desserts. One-and-done disposable menus also are available.

QR codes also are printed on guest checks, which can be scanned by guests who input the amount they’re paying and the table number, followed by a tip — no one has to touch a pen or a card.

“The reviews we’ve been getting are really supportive,” Martino said.

Although there have been numerous media reports of belligerent guests refusing to wear masks in restaurants, Martino said they had yet to have any such incidents at ThinkFoodGroup restaurants.

“We would handle it any way we’d have to handle a guest who might be intoxicated,” Martino said. “We’d ask them politely to leave. The safety and well-being of our team is first and foremost.”

He said restaurants are equipped with masks in envelopes that they’ll provide to guests free of charge, but D.C. requires that guests wear masks anyway.

To manage costs, labor and social distancing in the kitchen, TFG restaurants have smaller menus, down to about 30%-50% of normal options. Each restaurant offers two desserts instead of seven or eight, and prep-heavy dishes that require a lot of chopping have been altered or eliminated since most of the kitchens are run by salaried employees anyway.

Large-format takeout items have been quite successful, Martino said, such as a whole lamb shoulder from Zaytinya, a July 4 Spanish rib package from Jaleo and large dishes of three types of paella — chicken & mushroom, vegetable, and Valenciana, which includes rabbit, chicken and vegetables. Those all come with salad, bread and flan and can be pre-ordered for pickup or delivery. Bottles of wine and large-format Sangrias and Margaritas also are available.

With the restaurants operating at between 30% and 50% capacity, they’re not exactly raking in the cash.

“Right now to say they’re profitable is not the case,” Martino said. “Restaurants aren’t that profitable at 100 percent capacity."

“We’re never going to cut corners. We’re always going to do the right thing, and that means the right investment in the right places, which is our people, safety, sanitation and our culinary program,” he said. “We’re just tryng to get to a place that we can lose less money, be there for the community and make sure that we can get to a place where we can start to get more capacity safely as guests start to come back again and feel good about dining out again.”