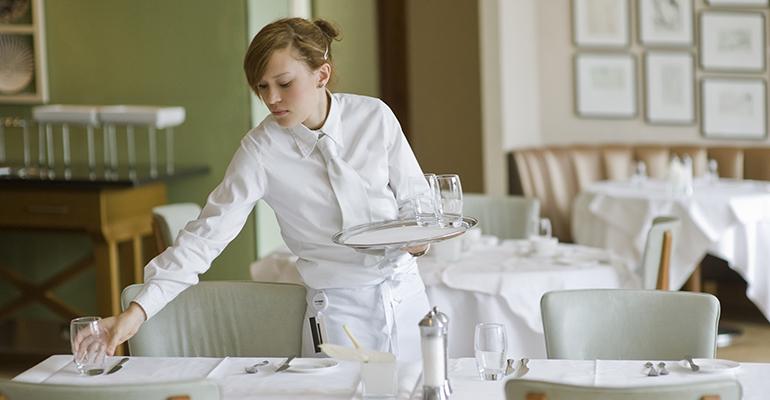 While the company did not provide a specific reason for the closure, only telling The Columbus Dispatch “Cameron Mitchell Restaurants has made the difficult, but appropriate, decision to permanently close M at Miranova.”

M at Miranova served American fare with an Asian flare since opening in downtown Columbus in 2002 to rave reviews. The AAA four-diamond restaurant underwent renovations in 2019 that included a revamp of the menu.

Nick Kokonas, co-owner of Chicago fine-dining restaurant Alinea, tweeted that it would allow employees who have been vaccinated to remove masks while working.

“While not requiring vaccinations, The Alinea Group will provide vaccination lapel pins to any employees who voluntarily choose to show proof of vax. Those employees will not be required to wear masks per CDC guidelines, and guests can identify them via the pin,” Kokonas said.

The pins are black and say “The Alinea Group Vaccinated.” Initial responses on Twitter are overall positive. Kokonas did say, however, that, “if up to me I certainly would do so,” when asked if he would require vaccines, but “ambiguous legal direction from local and federal governments” is keeping him from making that a requirement.

“We will continue to adhere to strict hourly hand washings and screenings for all employees. And we request that guests arrive with masks prior to being seated. We hope this strikes the appropriate balance between sanity and safety as we begin to fully reopen,” he continued.

After 14 months under mask mandates and lockdown, the most populated city in the U.S. lifted mask mandates for fully vaccinated consumers everywhere except the subway, hospitals and a select few locations. New York Gov. Andrew Cuomo lifted these restrictions on May 22.

Indoor dining limits were lifted on May 19, bringing capacity back to 100% across all the city’s restaurants. However, restaurants are still required to have six-feet between tables for social distancing measures.

The decision is still left to restaurants to decide if masks are required for dining or proof of vaccination to go maskless.

Read more: How New York City is slowly but surely rebounding from COVID-19

The San Francisco Bay Area restaurant Comal, which was once a leader in the no-tip movement, has decided to bring back tipping to its restaurants after eliminating them in 2014.

At the time, there was a service charge added to every check at its stand-alone unit to achieve pay parity between the front and back of house. However, the restaurant group now has three units, some of which are fast-casual, and owner John Paluska told Eater, “the no-tipping model was no longer viable.”

Instead of the 20% service charge on every order, the restaurants will pool all tips. The change went into effect May 12.

“We don’t feel any better about tips,” Paluska said. And it’s not a question of the model failing, he added. “We felt like our move to a service charge was successful. We aren’t moving away from that model because it’s broken. But … the landscape is different now, and we have to work within that.”

Ultimately, a service charge for counter-service wasn’t conducive to business for the brands, according to Paluska. And in an effort to keep the brands consistent, he added tipping back across the board as the concepts prepare for expansion.

Boston restaurant Mooncusser (formerly Mooncusser Fish House) has named Chef Carl Dooley its new executive chef, the first since the pandemic closed the restaurant last spring. Dooley was most recently executive chef at Table at Season to Taste and competed on the 2016 season of ‘Top Chef.’ Table at Season to Taste was an early victim of the pandemic, closing in 2020.

Read more: A Top Chef Star Is Moving into a Seafood Restaurant in Boston’s Back Bay