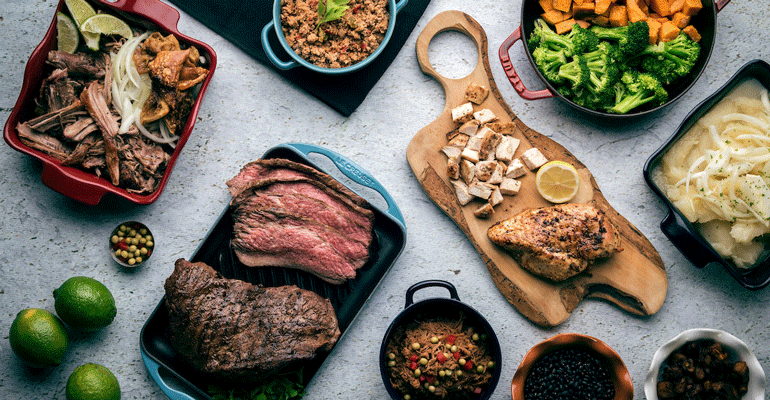 Florida-based spinoff is poised for growth As Carlos Gazitua planned a sixth Sergio’s Restaurant in south Florida three years ago, he knew it would be his family’s last full-service establishment.

With rents skyrocketing in premium locations, the company CEO saw the writing on the wall.

“We can’t bring the economics down,” said Gazitua, whose family founded Sergio’s more than 40 years ago. “The model for a full-service restaurant is not conducive to bringing great value to the guest.”

So, as he planned the Ft. Lauderdale location in 2015, he began crafting a fast-casual spinoff variation of Sergio’s. Careful not to cannibalize the company’s legacy casual restaurants, Sergio’s Cuban was developed as a hybrid eatery. It offers a healthy spin on Cuban comfort foods, as well as indulgent classics based on family recipes. The first Sergio’s Cuban opened in 2015 at the Fort Lauderdale-Hollywood International Airport. After testing the concept at two other non-traditional locations, Sergio’s Cuban is now poised for expansion.

“Chipotle did it for Mexican food and I think we’re going to do it for Cuban food,” Gazitua said.

Gazitua said he plans to grow the concept in other markets including Denver, Texas, Atlanta and Washington D.C. “We want to bring this fresh take on Cuban food to America,” he said.

The menu at Sergio’s Cuban is inspired by La Flaca, a low-calorie, low sodium section of Sergio’s flagship menu. The “skinny” menu, which debuted in 2012, features flavorful but nutritionally balanced dishes.

The menu is geared for diners looking for a healthier spin on old-school Latin dishes such as picadillo. The signature Cuban dish is typically made with ground beef, but the La Flaca and Sergio’s Cuban menu prepares the dish with ground turkey. “It took off,” Gazitua said.

A few years later, Sergio’s Cuban was born as a build your own Cuban bowl concept. Some of the healthier and alt-protein choices include cauliflower rice, Cuban-style ground turkey, citrus grilled chicken and organic quinoa. The average check is $10.50

Gazitua calls it a rule breaking concept that appeals to Gen Y and Gen Z — demographic groups that gravitate towards convenient, customizable and good-for-you options.

Still, Sergio’s is not your typical walk-the-line counter concept. Like Chipotle, it’s an assembly line operation for most meals. Customers can create their own bowls from a variety of choices including brown rice, greens, or cauliflower rice; choice of proteins include lechon (roasted pork), lean ground beef, braised shredded beef or vegetables.

The menu also includes made-to-order pressed sandwiches including a classic Cuban, breakfast bowls in the morning and snacks such as oven-baked empanadas, french fries, croquetas, and plantain chips.

To keep lines flowing, on-the-go customers can order snacks such as empanadas directly from the coffee bar. But, don’t be surprised if you’re favorite pastry is gone by the end of the day.

“It’s kind of like a doughnut shop. Whatever's available is available,” Gazitua said of the empanadas.

Gazitua credits his mother’s and grandmother’s tried-and true recipes for the brand’s success. After all, the competition in Miami is tough.  But they’ve managed to stick around for more than 40 years.

“You better be pretty good to survive,” he said.