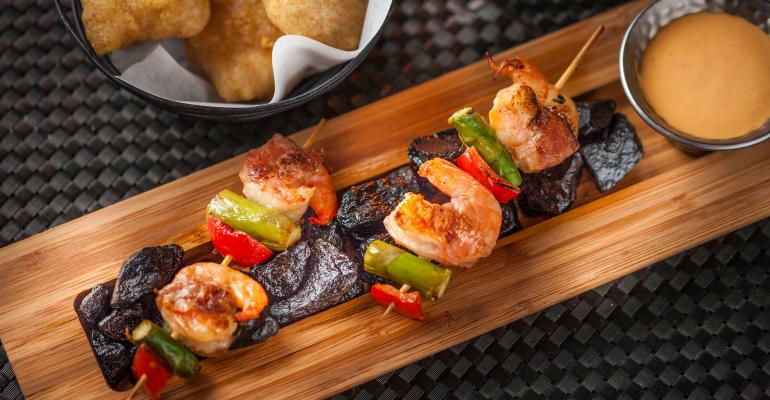 Street Guys Hospitality
Shrimp skewers that will be a part of the new menu after Ambar reopens.
Operations

Ambar in Washington, D.C., is temporarily closing, but workers will still be paid

When Ivan Iricanin — founder/co-owner of 14-unit Street Guys Hospitality restaurant group — decided to close and completely renovate his flagship, all-you-can-eat Balkan restaurant Ambar in Washington, D.C., his thoughts immediately turned to his staff. While a two-month closure is difficult for any restaurant to navigate, it’s especially risky for the restaurant’s employees.

To avoid the inevitable slew of resignation notices from employees seeking a winter paycheck, Iricanin made the unusual decision to pay his entire staff between 50% to 70% of their paychecks, including gratuities, during the restaurant’s two-month closure from January through March.

“We always ask for above and beyond of our employees and we need to lead by example,” Iricanin said. “We need to not only protect our business, but we need to protect their well-being as well. So we thought to ourselves, ‘in two months they can be looking for other jobs and not know what is going to happen or we can continue paying them most of their salary until the restaurant reopens.’”

The total investment over the course of two months is $160,000, with a written stipulation in the contract that allows for continued payment if the renovation takes longer than anticipated. Street Guys Hospitality is paying for this added expense out of pocket, a feat that’s much easier for a larger restaurant group with multiple properties than a singular independent restaurant.

“We’ll see return on investment in the form of five-star reviews and a high employee retention rate,” Iricanin said without further divulging how his restaurant group is footing the bill.

After initially discussing the renovation employment strategy with his team, with a human resources director and employment lawyer present, employees were given three weeks to look over and sign the contract or decline to participate. Though 97% of Ambar’s employees agreed to stay on during the renovation (with a few asking to be transferred to other restaurants), Iricanin still received varied reactions from his employees.

“I personally had a few people come up to me saying they are proud to work for a company that treats their employees like this,” Iricanin said. “We had a few people who were suspicious of the whole thing and how it worked, so we sat down with them and answered any questions.”

When Ambar reopens at the end of March, the Serbian/Balkan small-plates restaurant with unlimited food/drinks will be doubled in size to 6,000-square feet, with an added third floor and new food and drink items added to the menu.

Currently at the Michelin Bib Gourmand-recommended restaurant, guests can order (for $49 per person, or $59 per person for large plates) unlimited orders of kajmak (Serbian creamy cheese), spreads, meat pies, flatbreads and meat platters.

Iricanin took his employees’ needs into account when planning out the renovation. He added service stations and bars on every floor and used slip-resistant flooring to make service easier for his waitstaff and bartenders.

In this way, Iricanin said, he is expanding his employee-first culture to all areas of employment, and not just during the two months of closure. He said that his company offers comprehensive health and dental insurance, paid time off packages and rigorous training programs for new employees.

“It is so competitive in the restaurant industry, especially here [in Washington, D.C.],” Iricanin said. “Our turnover rate is very small. You have to get creative to be able to keep up with the high demand for employees.”