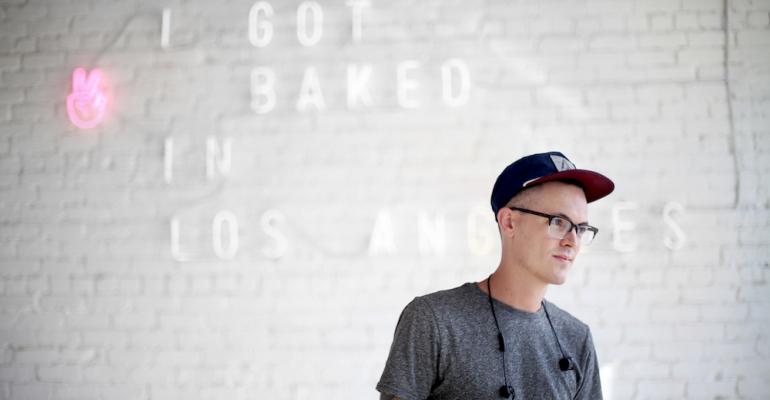 With this model, wages may rise but efficiency is up and turnover is down

While many operators struggle to keep up with a minimum wage creeping up to $15 per hour around the country, Mr. Holmes Bakehouse CEO Aaron Caddel mitigates his labor problems by paying the majority of his employees more than $20 per hour.

His solution: Increase production by using a merit-based pay scale that rewards his best employees and incentivizes everyone else to do better.

For example, the more pastries that a kitchen chef at the two-unit San Francisco-based bakery makes, the larger their paycheck will be. But it’s not just about quantity. Being able to produce large batches of brioches quickly won’t get you a raise if half of them are burnt or otherwise not up to snuff.

“Their core responsibilities start with quality,” Caddel said. “We hold employees accountable. If they [can’t meet expectations], then we might say, ‘Maybe you took a promotion you weren’t ready for.’ We’ve found that when we raise the bar, they ultimately come through and turn things around. It’s remarkable what we’ve been able to do.”

The result: A dramatically increased productivity rate and employee turnover rate that has plummeted to 13%.

Here’s how it works:

Every employee is divided into groups based on their position in the bakery (including brioche-making, lamination, production, baking and dishwashing) and every group has three paycheck levels based on certain criteria. Every six months, the head chef does assessments for every employee using a rubric and a team of outside proctors.

“In any kitchen, there are people who run circles around those around them. We truly wish everyone performed that way,” he said.

Based on their performance of such factors as store assessment, product quality, and financial goals, their “level” is re-evaluated. With each level comes a new title, a new salary, and more output expectations. The head chef of both bakeries is also held accountable to key performance indicators.

While each hired employee starts at level one, they can quickly rise through the ranks to get more responsibilities and a bigger paycheck. This aspect of his merit-based payment system has understandably caused some friction among employees, Caddel said.

“When we initially rolled this out, there were a lot of difficulties,” he said. “Longtime employees who had become complacent were put off by a newbie getting paid more than them when they were only here for a short time. What that [competitiveness] does is shoot adrenaline into a work culture that is now defined by product quality and overall performance.”

At this point, more than one year after implementing the merit-based pay scale, 70% of Mr. Holmes Bakehouse employees are at the highest level within their position. But even though that means that nearly three quarters of employees are taking home $20+ per hour paychecks, Caddel is not worried about his bottom line.

“I gave out 30% wage increases and I’m getting twice the amount of work done,” he said. “And if everyone got to level three, we’d see a 70% increase in productivity.”

For Caddel, increased production means more orders can be filled for both their retail and wholesale business. In fact, over the past year, they’ve seen a 50% increase in labor-dollar efficiency: they are producing the same amount of product with 50% labor efficiency.

The results have helped Caddel grow his franchising program overseas. Six months ago, Mr. Holmes Bakehouse only had their San Francisco and Los Angeles bakeries and now they have signed 18 franchisee agreements in the Middle East and in Singapore. With more in the works.

On the employee side, Mr. Holmes Bakehouse’s turnover rate is down to 13%, a fraction of the industry average of around 75%, according to the Bureau of Labor Statistics. And, as Caddel said, “we’re never short of top talent in the industry.”

While he believes that quantifying performance can help alleviate some of the stress the foodservice industry suffers, Caddel admits that it’s not for everyone. It’s “different for bakeries,” he said, because “we have better margins than restaurants.”

But for Mr. Holmes Bakehouse, qualifying and quantifying performance has been a crucial business-booster.

“At the end of the day, people want to become part of this company because we’re churning out a very healthy business and a structure of people managing themselves,” Caddel said.