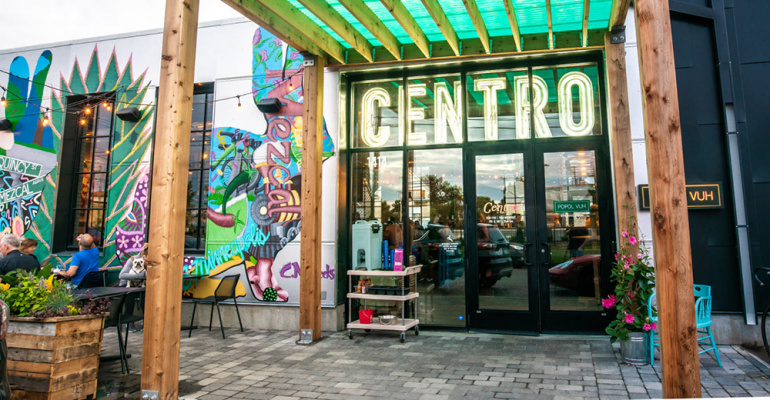 Two restaurants for the rent of one

When the perfect spot has challenges, here’s one solution

When restaurateur Jami Olson opened her Minneapolis restaurants Centro and Popol Vuh in summer 2018, she originally envisioned owning and operating one fine-dining concept to showcase executive chef Jose Alarcon’s elevated Mexican cuisine. But when she found an ideal location in Northeast Minneapolis, her lease came with a divided space unexpectedly split in half by two immovable walls.

Dual concept or “twin” restaurants are not new, but they are becoming increasingly common as a unique way of reimagining a challenging restaurant space, or for introducing multiple concepts with less financial risk. Olson, for example, pays for one lease and one liquor license.

“We kept trying to figure out what to do with the extra space,” Olson said. “At first, we were thinking we’d turn it into a private events space, but that’s tricky. Ultimately, we decided that, with the minimum wage rising to $15 an hour, that relying on only a refined concept was too risky, so we came up with the idea of a fast-casual sister concept to fill the space.”

Although both restaurants share a roof and the same main entrance, they have decidedly different vibes, menus, and clientele.

When customers walk in the door, they will first encounter the 3,000-square-foot fast-casual restaurant Centro, spearheaded by chef Alarcon, which opened in June 2018. Centro has a casual, celebratory atmosphere, outdoor seating, and a menu dedicated to Mexican street food, including eight types of tacos for $4 each, a raw bar, appetizers, cocktails on tap, and boozy brunch menu for an average check of $25 per person.

The fine-dining concept Popol Vuh (loosely translated as Book of the People), which opened in August 2018 in the slightly smaller 2,300-square-foot portion of the space, highlights chef Alarcon’s interpretation of high-end Mexican cuisine. The menu includes shared plates like smoked ribs and guacamole with serrano peppers; appetizers like cactus salad and duck carnitas; entrees like carne asada and chuleta (porkchops); as well as a chef’s menu, for an average check of $55 per person.

While Centro is serving festive margaritas on tap, the cocktail program on the Popol Vuh side is a bit more reserved with a dedicated wine list and menu that includes a tequila negroni and a bourbon and curacao sour with worm salt, each for $13. 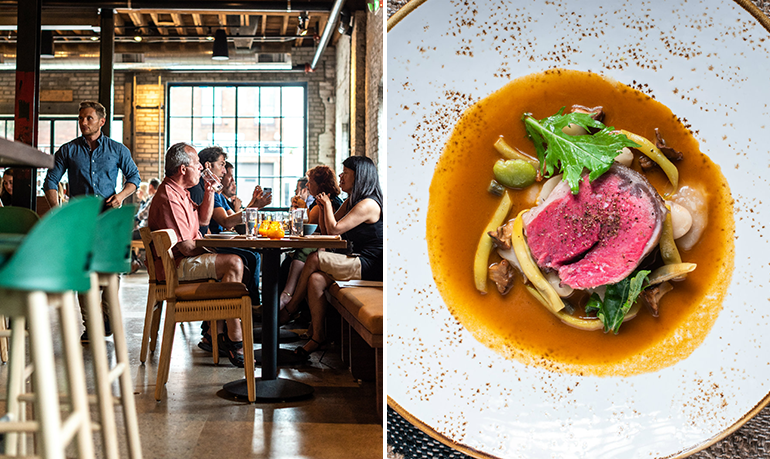 For Olson, the dual-concept restaurant seemed like a perfect fit from the beginning, even though juggling two restaurants under one roof was a challenge at first.

“It’s a lot more labor-intensive right away, but the efficiency that you get when you can play one concept off the other is phenomenal, “ Olson said. “We have a long corridor that separates the two spaces and it’s really cool to see the transition from one to the other. Even the music changes.”

The two restaurants may have distinct personalities, but they do share an executive chef, a kitchen and some staff.

“We have been trying to separate the concepts more and more,” Olson said. “For our front of the house it’s a 10% crossover, and 20% crossover for back of the house. While Popol Vuh is more traditional with guests tipping what they want, on the Centro side, the cashiers and bartenders divvy up the tips. We have not had any issues thus far because they are making comparable tips from both places.” 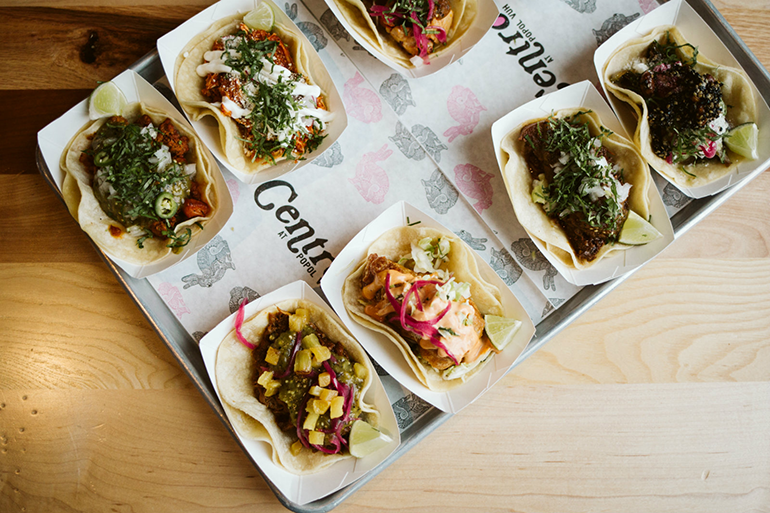 Centro serves eight kinds of tacos for $4 a pop.

The bartenders, for example, on the Centro side only have to pour beers and cocktails on tap, while bartenders and servers on the Popol Vuh side learn to take orders for, mix, and serve more complex drinks.

Popol Vuh and Centro also share food costs and even sometimes overlap ingredients. For example, the Centro side has a small rotating wine list, and when Popol Vuh introduces a new bottle of wine and they end up with extra inventory, they can easily add it to the wine list at Centro.

The one operations aspect they will never overlap, Olson said, is gratuities. Employees do not pool tips from both locations. To balance out the labor costs on the more-casual Centro side, Olson said they tack on a 4.9% service charge to all orders placed.

From the customer experience perspective, Olson hopes guests will be inspired to dine or grab drinks at both.

For example, they decided to put Centro nearer to the entrance so guests with reservations at Popol Vuh will have to walk through Centro to get to their table. The restaurants also share a bathroom, giving guests of Centro and Popol Vuh even more opportunity to be introduced to both.

“You get people coming in for reservations and maybe their table is taking a little longer, so they grab drinks on Centro side before they go over to Popol Vuh,” Olsen said. “We’re very much a ‘business in front, party in the back’ kind of concept. Centro definitely fits the neighborhood more, while Popol Vuh is more of a destination.”

CORRECTION: This story has been updated to correct the spelling of Jami Olson's name and the name of the restaurant Popol Vuh.