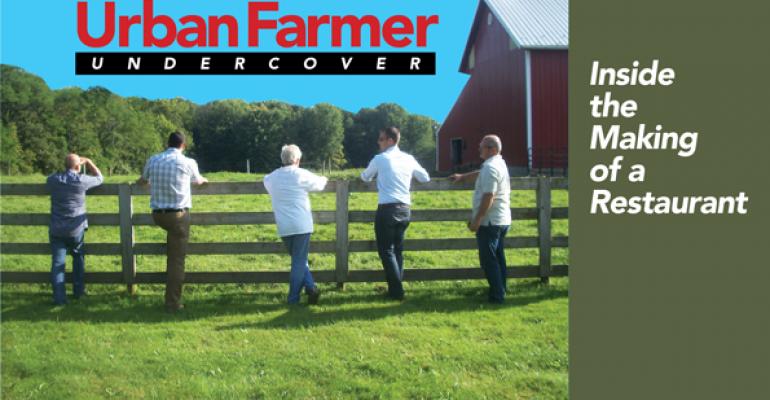 Pulling together a look for Sage's latest project

Follow Sage Restaurant Group every step of the way as it works to open Urban Farmer in Cleveland next April.&nbsp;The modern steakhouse is part of an $80-million hotel project. &bull; GALLERY: A peek inside Urban Farmer

I know Urban Farmer Cleveland will be a modern steakhouse. That’s how Sage Restaurant Group describes the concept. And this summer, I learned firsthand it would also have a strong farm-to-table focus as I explored the farms of Ohio with a crew of Sage execs.

But how will the restaurant really look and feel?

“Imagine a rancher,” Peter Karpinski says, “who meets and marries this sophisticated art dealer from Cleveland, and this is their redesigned farmhouse. It will have a farm feel, with modern, cosmopolitan touches.”

That story—Karpinski’s version of Green Acres—is what David Ashen is now telling through the interior design of the 220-seat restaurant scheduled to open this spring.

The renowned designer has made the trip to Cleveland from his New York Dash Design studio and is sitting around a long table on the second floor of the $80-million Westin Hotel still under construction. He’s talking to Kristin Cullen, one of his interior designers, and Karpinski, the head of Sage Restaurant Group. They’re standing and leaning over a table that’s scattered with drawings and sketches, boards of materials, colors and swatches and pictures and renderings of furniture and art they’re considering.

They’re going through the design development presentation, page by page, assessing and updating every piece of the plan Ashen started before Sage even acquired the property in 2011. They’ve already walked the entire ground-floor restaurant this cold fall morning, noting areas of concern and other questions that are now being discussed and debated.

Ashen tells me of the mixed aesthetic—“rural chic”—he’s been charged with creating. Karpinski fills me in on the backstory, of how his restaurant-creating process starts with a narrative like this to describe the concept. Here, it’s this unique marriage between farm and cosmopolitan, which he says, will modernize the traditional steakhouse in a way that will make it more female friendly.

We’re in what has to be the only functional room of this massive construction project, in what could almost pass for a large conference room, minus the white hard hats strewn across the space. The audible beep, beep, beeping of vehicles in reverse and the not-so-distant banging of construction work are constant reminders that the surrounding hotel and restaurant are still a work in progress.

The entire project is still on course for a late April opening, and there are more than 100 workers throughout the building trying to seal off the exterior before winter officially arrives.

The interior designed by Ashen will feature organic, reclaimed and modern materials throughout the 7,000-square-foot-space, and those details are now being discussed.

“This bar chair is really important,” Karpinski stresses. “We’ve been talking about this for two years. Is there a really cool one we could buy off the shelf? But who’d make it at bar height? Do we have to make it custom?”

Cullen has just sheepishly pulled out the prototype she had shipped to Cleveland. Clearly, she wasn’t thrilled about the end result, but Karpinski is straight to the point. “That’s horrible,” he says. “The one in the picture looks better than this. The back is terrible.”

“It was made in two days and they used the wrong scale,” Ashen theorizes about the very tall chair. “It looks like it was made for a giant.”

The conversation sounds serious, but this process is like my previous experiences with the restaurant and corporate team: detailed, but loose; serious, yet fun.

They move on to discuss an opening between two columns they had planned to cover with art, but after walking the space earlier this morning, they decide to keep open the views to the kitchen. When talk turns to the private dining room, the farmer’s wife is brought up. Of course she’s a world traveler and has even come home from Asia with souvenirs, which is why Cullen is shopping for oriental rugs. “Buy a bunch,” Karpinski says, “and we can mix and match. This will make the spacer richer and more complex.”

Cullen turns through all 40 pages of the design plan and the trio explores and updates the progress and plan for every inch of the restaurant.

“When does it get warm here?” Karpinski asks me as they move outside the restaurant. He decides they ought to have heaters ready for the patio since April and May in Cleveland can range from 30 to 80 degrees. “Add that to the list.”

Talk shifts to the massive Urban Farmer sign that will run vertically up the building. Karpinski boasts it will be 39 feet tall. “Thirty-nine feet?” Cullen asks.

“No one will miss it,” says Karpinski, adding that he’s never been pleased with the size of the signs at his past restaurants. “Not robust enough. For this one, everyone has said, ‘Karpinski, if this doesn’t work for you, go talk to a counselor.’”

The same, but different

Ashen also designed the first Urban Farmer in Portland several years ago, but this one will be different. The process has been much easier, because they’ve been able to spend far more time enhancing than creating, says Karpinski.

“Yeah, but there’s also pressure,” Ashen responds. “We knew what the DNA was, but this restaurant is different. In Portland, there’s an atrium, and here it’s a contained space. This was more challenging. We have different ceiling heights and different rooms. We’re not just taking stuff we did in Portland and dropping it here. Everything has to be relevant for Cleveland.”

Which brings us back to the story of our happily married couple from two different worlds.

“It can’t be a kitsch representation,” Ashen explains. “I want to be specific to Peter’s narrative. It has to be what’s unique to Ohio. That’s the foundation. It has to have the texture of older buildings, with things painted, but maybe worn a little—yet still have an industrial vernacular.”

That foundation—the design plan—has been laid. Judging by the March 26, 2012 date on the design development presentation, it has been for quite a while.

Ashen, Cullen or someone from Dash Design will continue to visit every month to check the progress, while the finishing materials are ordered, tested and modified until the final two months when the bulk of the décor is installed.

Karpinski will continue to follow the progress as well, but he’s also got to oversee the branding and marketing sides of the project, as well as the food and operations. There’s still a lot to be done before Urban Farmer Cleveland opens its doors this spring.

Follow the series online at www.restaurant-hospitality.com/urban-farmer-undercover as Karpinski and Sage Restaurant Group allow us an inside look at what goes into opening one of their restaurants. Next up: Photo Gallery/A peek inside the building.