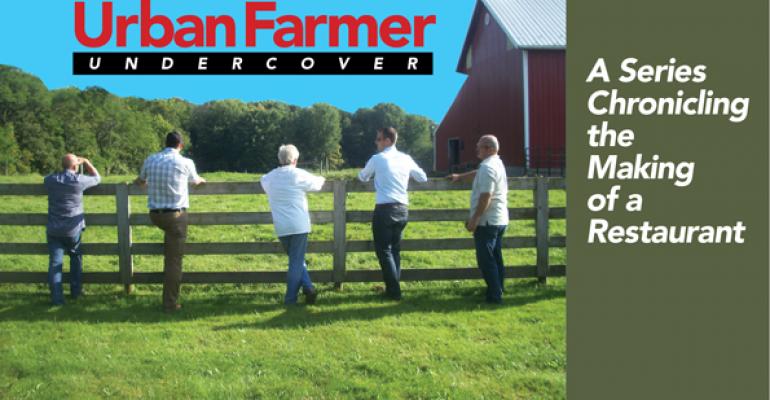 Urban Farmer: On the ground in Cleveland

Farm-to-table steakhouse sounds like an oxymoron, or a label an over-exuberant marketer might use, but here we learn that not only did Urban Farmer’s top chef spend a few days searching for primo ingredients at nearby farms, but a gang of Sage execs flew in to lead the charge.

On the day I first meet Peter Karpinski, the avid outdoorsman is wearing a white and blue checkered button-down shirt, dark jeans and cowboy boots. The shirt is tucked into his jeans, which makes a large belt buckle hard to miss. It reads “Urban Farmer” and is the same one worn by the staff at the restaurant in Portland. The city’s skyline is visible behind the type, he later tells me, and says ones will be made for Cleveland with its skyline.

Like the buckle, the new restaurant will be similar to the one in the Pacific Northwest, but with a decidedly Midwestern tilt. It’s described as a modern steakhouse, but farm-to-table is just as apt.

We’re having breakfast at the Marriott a block from where the new hotel and restaurant are being built. Peter arrived late the night before and we’re touching base before meeting up with the key players who will make or break the concept. They’re in town doing reconnaissance, exploring what the local area has to offer.

Peter grabs a large cup of coffee to go and we head out front to get his car and meet the others. There’s David Marsh, Sage’s senior v.p. of operations, and Michael Carr-Turnbough, the v.p. of culinary, both from the corporate office in Denver. And from Portland, there’s Matt Christianson, the executive chef at the Urban Farmer there, who will help open this one, and Troy Christian, the g.m. of another Sage concept, The Original, who will be moving to Cleveland soon to open this restaurant.

Peter’s passion for service—and frustration with the lack of it—is obvious before we leave the hotel. The bellman won’t take his valet ticket and instead points us back inside to a desk for help. “Thank you for your service,” he mutters under his breath as we walk back inside the hotel. After getting the car, we drive 60 miles west to The Chef’s Garden in Huron, following the other four in their rental. Karpinski keenly watches as the suburban cities turn to more rural towns the farther we get from Cleveland—similar, he says, to the area near Auburn, NY, where he grew up.

The guys know all about Farmer Lee Jones’ family farm, but this is their first visit. Some of their restaurants, including Mercat, a Chicago partnership with Iron Chef Jose Garces, are currently customers. This is obvious when Karpinski notices an invoice and order being prepared for Mercat as Farmer Lee leads us through the room where orders are being packaged.

“Look at this,” shouts Peter, who’s holding up the sheet of paper dangling from a shelf. “How cool is that?” He doesn’t miss a chance for some fun, writing a note on the packaging slip to surprise his team in Chicago.

As we tour the farm, the affable Farmer Lee greets nearly every employee by name, making small talk with most. We’re already behind schedule, and this is our first stop of the day, but Farmer Lee is now introducing himself to a new employee who’s recently started.

Farmer Lee’s passion for the business and attention to detail are obvious, from food safety to his employees to the unique products he’s bringing to life, and they are clearly noticed by the Sage team. As the others carry two large goody boxes of samples back to their car, David Marsh slows his walk and we fall a little behind. “This place is impressive,” he says. “We like to align ourselves with similar-type companies that share the same philosophies.”

While Farmer Lee may have 300 acres, a vast staff and a high-profile list of clients, Chef’s Garden is very much a family-owned business that fits the farm-to-table mode Sage is looking for, albeit on a larger scale than most. The quality it provides does come with a price, but Peter says corporate chef Michael Carr-Turnbough is a master at training the kitchens to use just the right amount of product to maximize flavor and value. And for every Chef’s Garden, there are other off-the-radar and less expensive producers Sage finds and partners with to help offset the cost of the more expensive ones.

It’s now almost noon, and we’re a good hour behind schedule. Instead of heading south to a farm in Wooster as planned, we stop at a local burger joint in neighboring Sandusky. The guys dissect the menu and then order most of it. “When you eat with us, we order half the menu,” says Michael, whom the others call “chef.” He’s also the one who seems to be doing the most “research.”

The topic of conversation is briefly The Chef’s Garden, but it’s not about the tiny yellow popcorn shoots we sampled that taste just like Ohio’s amazing sweet corn, or the wasabi mustard green that had quite a kick. It’s about Farmer Lee, and how he knows and greets each employee by name.

The focus then turns to our server, who’s using her iPhone to take and log our orders. “It’s too slow,” she says when asked how it works. “Scrolling from page to page is a pain.” They debate the pros and cons of this technology, and Peter is clearly intrigued with the potential efficiencies it might offer.

From there, we head for Hiram, about 90 miles east, to Mackenzie Creamery, an artisan goat cheese producer. We pull into a long driveway leading to what appears to be an old farmhouse. We’re not sure we’re in the right place until Peter notices the license plate on the car we park behind: Chévre, it reads.

We meet Jean Mackenzie and her son Rob DeMuch. They’ve been creating handmade cheese in this tiny Ohio town since 2007, and what first began as a hobby for mom has become a full-time business for son. They lead us to the building opposite the farmhouse, where the cheese is made, aged and stored, and then we settle in around a kitchen table in the house to sample their “Baby Buche,” an aged bucheron-style, soft-ripened goat cheese. We also taste the Sweet Fire Chévre (made with black raspberry and habanero, and damn good!), as well as the Cognac Fig Chévre (Courvoisier cognac and Dalmatia figs).

Chef Matt, the executive chef at Urban Farmer and now the chef leading this emerging brand, tells Jean about the cheese cart that has been such a hit at the restaurant in Portland, the city where her daughter now also runs an artisanal goat cheese creamery. It’s how the Sage team found this spot, and like in Huron, it’s obvious these guys are thoroughly impressed by the passion, professionalism and product on display.

Jean details how goat cheese has become a part of her family’s life, and she proudly shows off an article she wrote for a local magazine about the leading ladies of Ohio cheese. Chef Michael asks about other cheese producers and the discussion turns to small farms in the area that Jean thinks Sage should check out.

This is part of the corporate chef’s job, and one he’s doing quite well. He’s making friends and more importantly, connections, not just to this cheese maker, but also to more potential sources and suppliers. You should see the dossiers he’s got on all the people and places we’re visiting, with descriptions, addresses and contact information for each. Many of them are the kinds of places not listed in the phone book, or even online.

It’s now past 3 p.m. as we head north to Newbury, another small town in Geauga County, to visit Great American Lamb Company. We meet Ben Calkins, a Harvard- and Michigan-educated attorney still practicing law, who’s also quite a character and a passionate sheep rancher. He now has dozens of sheep and plans for even more. He leads us through his barn and flock, before sending us back to Cleveland with frozen samples of his lamb meat and sausage.

We head back to the city’s Warehouse District, where the other four out-of-towners have rented two apartments. They’re only in town for a couple extra nights, but have opted for this lodging because a chef needs his kitchen. While the boxes of samples are still being carried in, Matt and Michael already have water running over the frozen lamb and the oven firing up. They’re now cleaning and cooking everything they’ve gathered the last two days, including produce, beef and pork from their stops the day before Peter and I joined.

“Someone open the windows,” Matt shouts to no one in particular, clearly foreshadowing a kitchen on the verge of heating up.

Troy runs downstairs to a store to pick up more beer, local, of course, from Akron’s Thirsty Dog brewery, and several Ohio wines are opened as everyone but the chefs sits back and relaxes. Within minutes, plates are on the counter and the crew that has grown to include Alan Feuerman, the new hotel’s director of sales and marketing, and Kevin McKinney, Sage Hospitality’s v.p. of design and construction, starts enjoying the chefs’ fast work.

A tomato and watermelon salad tastes like it’s been prepared in a fine-dining restaurant and not in this tiny kitchen. Fresh corn polenta, cheese and lamb and pork sausages follow. Next comes a plate with pork from two different farms, then another offers a side-by-side comparison of beef from each. Favorites are chosen and someone must be making more than mental notes because a couple weeks later I learn they’ve already placed an order for 10 heritage breed hogs from the livestock farm they liked the most.

I ask Matt when the chefs get to sample their work and the new products, and he says they don’t eat until everyone else is fed. Some friendly debate ensues as others question the amount of tasting that happens before serving, as the already relaxed team loosens up even more as day turns to night.

It’s a little after 9, and I head home, west out of Cleveland on the same roads I drove earlier with Peter. I think back to the whirlwind day and realize I never answered the question he asked from the back of Farmer Lee’s truck. No Peter, I don’t think anyone in my company did anything as cool as this today. The Sage crew had fun along the way, but it was definitely work for them—the kind of work and attention to detail that go into opening a first-class restaurant.

Follow the series online at www.restaurant-hospitality.com/urban-farmer-undercover as Karpinski and Sage Restaurant Group allow us an inside look at what goes into opening one of their restaurants. Next up: Photo Gallery / Riding along with Sage.