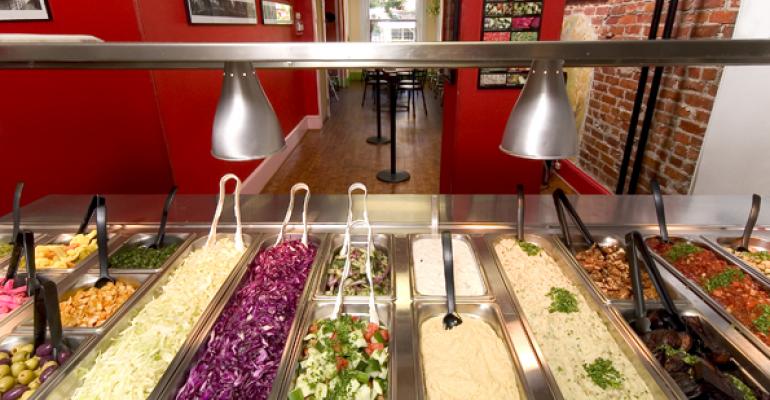 Scott and Arianne Bennett, the founders of the budding chain Amsterdam Falafelshop, are neither Dutch nor Middle Eastern. But they have created a concept that merges the feel of Amsterdam with the flavor of falafel, a traditional Middle Eastern dish, and they’ve won over a customer base that includes the Dutch, Middle Easterners and primarily Americans.

The couple fell in love with the falafel shops they experienced while traveling in Amsterdam, but when they returned home, they couldn’t find anything similar.

“There was nothing like that here,” says Arianne, the company’s president and c.e.o. “In life, everybody is always running around and they don’t have time to sit down and enjoy that lovely [fine-dining] experience. And they’re tired of the flavorless dumbed down Mexican or whatever kind of fast food that’s not spicy or delicious.”

So the Bennetts decided to create their own fast-casual falafel shop, named and designed to match what they experienced in Amsterdam. When they opened the first in a Washington, DC, neighborhood in 2004, they thought it could become a popular nightspot and a good business for them. They were right, but within six months, they were already thinking about franchising, too.

The concept offers just falafel—deep fried balls made of chickpeas and fava beans—served in pitas as a sandwich or in a bowl as a salad. Customers can top their falafel with up to 22 toppings and add a side order of Dutch fries. Virgin brownies are the only other item on the menu, and named that to make it clear to customers hoping for a bonus ingredient you might find more commonly in Amsterdam.

A large pita sandwich costs $6.55, and Bennett says customers typically spend about $11 for a sandwich, fries and soda. Profits are strong, she says, because the main ingredient in falafel—chickpeas—isn’t pricy and doesn’t fluctuate in cost like beef or milk.

There are now two franchised locations open—one outside Boston and another in Annapolis, MD—and plenty more coming. Another will open in DC in February and the Bennetts have sold franchises in Texas, Utah and four more in Boston. All have come from people who fell in love with the concept as customers of the first location.

So how does a small restaurant selling a single item—one that the American palate largely doesn’t know—succeed and grow into franchises sprouting up across the country? Arianne offered these five tips for ways restaurateurs can bring a new or unique food to a region:

1. Keep it simple. You have to be focused on the core concept. Other franchises try to meet everyone’s needs, but none bring anything super unique to the party, she says.

2. Don’t be afraid. And don’t be afraid of being unique or offering a single item. Be bold, and don’t dumb down your food. Make it like you’re supposed to—delicious, like you had it as a child or how it was wherever you first tried it. If it’s good, people will come and then they’ll bring in friends.

3. Get involved with the community. Ultimately, you’re a small businessperson and your job is to get out in the community and be a part of it. Hire from the local community, even as close as within walking or biking distance, and your employees will help spread the word.

4. Be hospitable and fun. “I get that it’s fast food, but we come from fine dining,” Arianne says. “This is hospitality. Our job is to talk to people and tell them about the food, and we’re a little a sassy and off color, and there’s a charm to that. People remember that.”

5. Make the food really good. Bennett says although customers who grew up eating falafel are initially skeptical, they are won over and become repeat customers. “The first time someone from the Middle East comes in, they ask if the owner is from there,” she explains. “We tell them no, but to try it anyway. They do and they usually come back for more.” The DC shop caters to many of the nearby embassies, she says, and the Dutch décor helps alleviate any cultural or ethnic divides in store. “Just the other day a student from Jordan came in and told us he didn’t think it was going to be good, but ended up saying it was delicious.” If the food doesn’t evoke that, how do you penetrate a market?” she asks.

Arianne credits her husband Scott with the original idea and the background to help pull it off. He’d been a longtime bartender at a DC favorite, Cashion’s Eat Place. The two hired a chef and spent about a year tweaking the recipe for the falafel before opening.