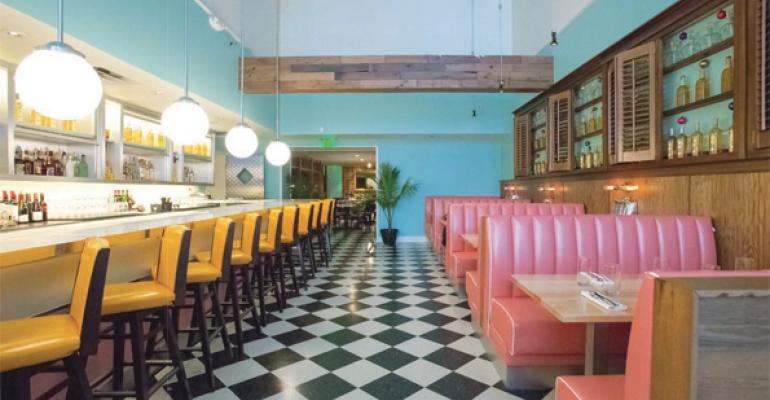 Next up for Jose Garces: Rosa Blanca

In the 10 years since Restaurant Hospitality gave Jose Garces its Rising Star award, the guy has set the world on fire. In his home base of Philadelphia, he now has seven restaurants and a food truck. He has four more restaurants in Atlantic City and one each in Scottsdale, AZ, and Chicago. He also has two more restaurants in Palm Springs, CA. Have we mentioned that Garces Restaurant Group also has a large catering division and a farm that supplies some of its restaurants with fresh vegetables?

So what have you been up to the last 10 years?

We tease, of course, because few sane people could or would want to keep the pace of Garces. But there’s more to the guy than his ferocious work schedule. He also happens to be an extremely talented chef. In 2009 the James Beard Foundation named him the Best Chef in the Mid-Atlantic region and in the same year he won the coveted title of Iron Chef. His fertile culinary mind simply can’t be contained, which leads us to his latest project, Rosa Blanca.

Garces has an uncanny ability to understand what the public wants or will want when he delivers it to their doorstep. The doorstep in this case is Center City Philadelphia, where Rosa Blanca offers Cuban and Caribbean food in a diner environment. It’s an unlikely tropical setting amidst the gritty streets, but once you walk through the door, you’re transported to some sultry island that inspired Garces during his travels.

The diner, as you might expect, is open for breakfast, lunch and dinner. On the weekends, the doors remain open until 2 a.m. Many menu items are available for sit down or take out at a cafeteria-style counter. The talent in the kitchen is Yun Fuentes, the chef de cuisine who, with Garces, has crated a menu that blends comfort favorites and authentic dishes with farm-fresh ingredients. In other words, they’ve taken diner food to a level well beyond what our pals at Denny’s offer.

The menu tells you that immediately, but the décor also suggests that Garces is swinging for the fence everywhere. As one enters the door, you see a hostess stand with light pink panels framed in raw aluminum. This same look is reflected in the adjacent 15-seat curved bar and its accompanying mustard vinyl bar stools. The bar features a selection of more than 70 brands of rum, which are showcased on illuminated shutter-fronted shelves that also house vintage books and cigar-making paraphernalia. It’s all very Cuban.

The sandwich counter, where one can eat or pick up packaged menu items for takeout, is clad in quilted stainless steel. Behind the pick-up counter stands a wall of white subway tiles with brightly colored grout and a chalkboard featuring the day’s specials.

Rosa Blanca’s front dining room draws its inspiration from the colors, style and mood of island life, which means there are splashes of coral pink and aqua all around. Checkered black and white vinyl floors, vintage metal ceiling fans and mini diner jukeboxes contribute to the 1940s Caribbean theme. The rear dining area is more rustic and intimate with reclaimed wood planks and antique cigar boxes covering the walls.

The menu at Rosa Blanca also hits the thematic mark. At breakfast, for example, one can order a Spanish omelet with Serrano ham and saffron aioli. For a heartier meal, one might order Vaca Frita, which is braised beef with moro (rice and beans) and sweet plaintains topped with a fried egg. For those on the go, a variety of pasteles (Cuban pastries) are available, including Guayaya y Queso, a guava and cheese turnover.

All of this would fall short without the Cuban and Caribbean cocktails. In addition to the now well-known mojito, Rosa Blanca’s cocktail menu includes drinks such as La Tormenta, a blend of rum, lime, cardamom and mint; Dos Gardenia, a mix of white rum, peach and lemon; and Ah Fuego, made with orange vodka, papaya, chili and lemon. Rosa’s selection of more than 70 rums also means an array of rum flights are also available.

With the addition of this Cuban and Caribbean diner, the Garces Restaurant Group portfolio is more interesting and diverse than ever. It spans Andalusian tapas, modern Mexican street food, European bistro fare and artisanal American cuisine. There may be limits to the vision of Jose Garces, but we haven’t seen them yet.