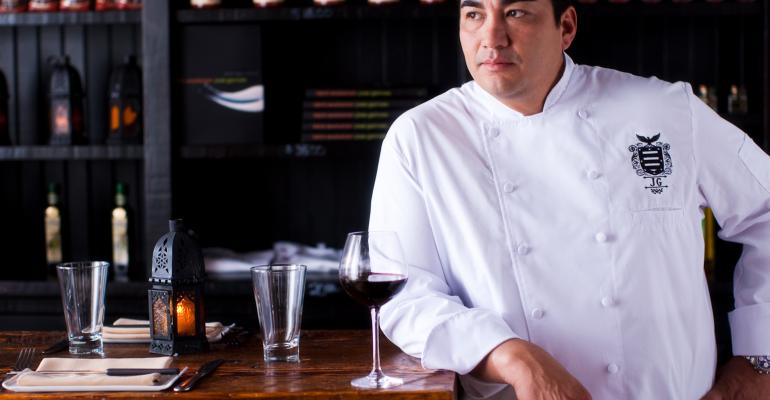 Chef Jose Garces, master of Latin cuisine and owner of Garces Restaurant Group in Philadelphia, is this year's MenuMasters Hall of Fame Inductee.

Since opening his first restaurant, Amada, in 2005, Garces has emerged as one of the nation’s most gifted young chefs. He has opened eight additional restaurants in Philadelphia and Chicago; authored a cookbook, “Latin Evolution,” and won the James Beard Foundation’s “Best Chef Mid-Atlantic” award in 2009. In 2010, he won the Food Network’s “The Next Iron Chef” competition, making him one of just seven chefs in the country to hold the title of Iron Chef America. He also is the owner and operator of a 40-acre farm in Bucks County, Penn., where he grows much of the produce used at his Philadelphia restaurants.

In 2011, Garces brought his talents to Scottsdale, Ariz., at The Saguaro hotel, where he manages three distinct dining outlets. He also is the executive chef at Chicago’s much-praised restaurant, Mercat a la Planxa. Garces began his culinary training in the kitchen of his paternal grandmother.

“I’ve been privileged to work with some of the finest chefs in America and Spain,” he said, “but my passion for cooking comes from early memories of preparing meals for my family with Mamita Amada. Even when I was a child, I was drawn to the joy of cooking a great meal. I have always loved the way that food can transform a person’s whole outlook and really make their day.”

The 15th annual MenuMasters Awards Celebration will be held at the Drake Hotel in Chicago on May 5.